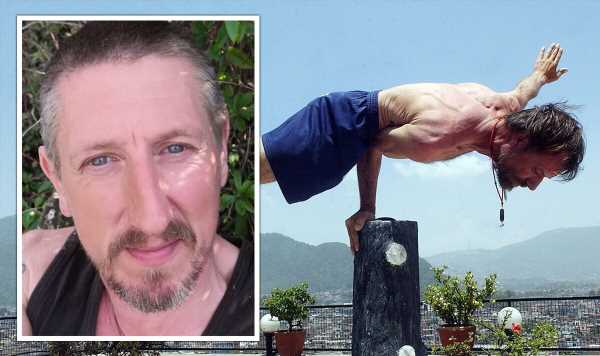 Freeze the Fear with Wim Hof trailer from the BBC

Mark Anthony Davies has had a traumatic life. He suffered a “really bad upbringing” and later in life, in 1994, was caught up in a major car accident. Today, the former carer is passionate about spreading mental health guidance – but only after finding alternative health practices including the Wim Hof Method, which he says are a “good way of quieting the mind”.

Davies, who was in his 20s at the time, was driving home from his work at a care home in Ludlow when he collided head-on with a speeding car.

In the car with him was his best friend who died during the crash. The driver of the other car died as well.

The event meant that Davies spiraled into a “major level of depression” and developed post-traumatic stress disorder or PTSD.

READ MORE: What does a blood clot look like? How to tell the difference between bruises & blood clots

Over the years, he “tried everything” to heal, including different alternative therapies and “mainstream therapies”. He said he received therapy from the NHS as well.

However, he said he “stayed well away” from antidepressants which have been shown to be effective at dealing with a large number of depression cases.

But about three years ago, he was introduced to the Wim Hof Method by a friend.

The Wim Hof Method is a well-being technique that uses a combination of cold-water exposure and a meditation called “inner fire” to provide health benefits, such as lower inflammation which have been widely reported.

Davies attributes parts of the method, mostly the cold exposure, combined with his other breathing techniques for pulling him through his health conditions.

He celebrated his self-improvement on Facebook. He wrote: If you are at all uncertain about the effects of the Wim Hof Method on mental health…

“I had anxiety and depression, PTSD, OCD and bipolar, but not anymore.”

He said: “Combined with the Wim Hof Method, the quieting of the mind as well gives you a slight feeling of euphoria. The one works better with the other.”

Despite his embrace of the technique, Davies, who used to be a fitness instructor, said he was removed from the Wim Hof Method group on Facebook for raising concerns about the intensity of the breathing technique.

He suggested that breathing through your mouth, which the method recommends as part of the technique “is bad advice”.

He said: “You’re breathing in cold air, you’re not filtering the air, it can cause long term health issues. The Wim Hof Method is not perfect. However, it’s still more beneficial than not.”

Breathing through your mouth can dry out your gums and the tissue that lines your mouth.

This can change the natural bacteria in your mouth, leading to gum disease or tooth decay.

Patrick McKeown, a Fellow of the Royal Society of Biology, and a Member of the Physiological Society (UK), believes that a range of conditions including asthma are caused or exacerbated by modern human tendencies to mouth breath and over-breathe.