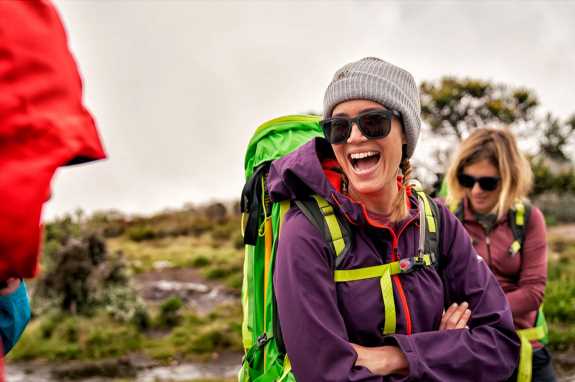 Mandy Moore just checked a massive goal off her bucket list: making it to base camp on Mt. Everest.

The This Is Us star, 35, spent more than a week trekking through the Nepal terrain to reach Everest Base Camp on Sunday, which sits at a whopping 17,700 ft. above sea level.

“Traversing this terrain has its challenges. Breathing at altitude, for instance, is not easy,” she wrote. “…Besides hydration and staying nourished, breathing is THE vital key in the fight against altitude sickness. It’s also a major takeaway that I will be employing back to the real world whether I’m in the midst of a tough workout or a weird day. Mind blown.”

Moore, who took on the trek with friends Ashley Streicher and Chase Weideman, with the help of guide Melissa Arnot Reid and Eddie Bauer, also reflected on the people who have walked those same trails before her — and those who died along the way.

“It’s impossible to be lucky enough to arrive at the foot of these mammoth peaks and not be attuned to the palpable energy of all of those who came before and lost their lives in these mountains,” she said. “The wave of emotion: respect, reverence, appreciation…that washed over us as we took in the prayer flags and yellow domed tents of basecamp AND sat on the rocks regarding the chortens that dot the hillside of the Tukla Pass the day before, profoundly.”

Moore’s successful hike comes in a deadly year for Everest climbers. Nepalese officials confirmed Monday that an 11th person has died this spring season while attempting to climb to Everest’s summit, which is an additional 12,000 ft. above the base camp where Moore ended her hike.

Due to poor weather conditions this year, large groups of climbers are attempting Everest at the same time, during the few nice days. That has created long lines to reach the summit, with many hikers running out of oxygen before reaching the top — or on the way back down.

The overcrowding is due to a combination of factors: the few days of good weather, inexperienced climbers and the government of Nepal issuing a record number of permits, 381, in an effort to market the climb to people willing to pay for the experience, according to the New York Times.

Moore emphasized the major differences between her climb and the one that people heading to the summit set out to do.

“Not to take away from our journey but I felt compelled to explain the difference between our trekking trip to Everest Base Camp vs the experienced and professional mountaineers and alpinists who are CLIMBING Everest,” she wrote in another post. “If all goes well, we will have completed what is only 1/6 of the entire trip for someone who actually climbs (8 weeks total). We stand in awe of the fortitude and training and superhuman strength it takes to attempt a feat like Everest and are deeply honored just to be here and feel the Khumbu vibes.”

After reaching base camp, Moore and her group returned to Kathmandu, the capital of Nepal, via helicopter — as many climbers do.

Reaching Everest Base Camp is one of several major hiking milestones that Moore has hit in the last year. The previous spring, she summited Mt. Kilimanjaro, and told PEOPLE that it inspired her to keep climbing.