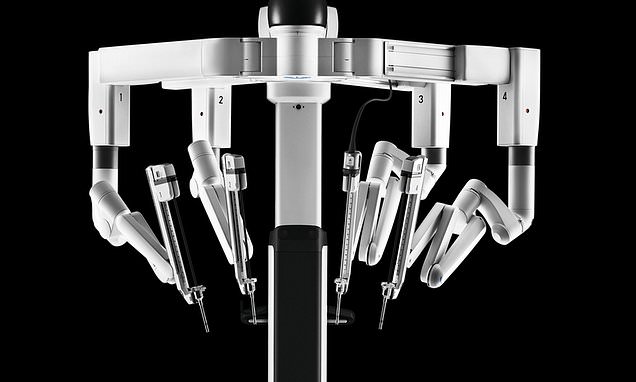 I’d had an almond-sized lump below my right ear for around ten years. It seemed only to swell when I had a dental infection, so I didn’t worry.

But in May 2016, I realised the lump had been swollen for weeks, despite me being well. It wasn’t painful, but I was concerned, so my GP referred me to a consultant. After scans and a biopsy, I was diagnosed with tonsil cancer.

The lump was a gland trying to trap the diseased cells. I’d had my tonsils removed as a child, but a small piece of tissue must have been left behind and become cancerous.

I was devastated. I had always been fit and healthy, and never smoked — one of the risk factors; I was still working and playing rugby. 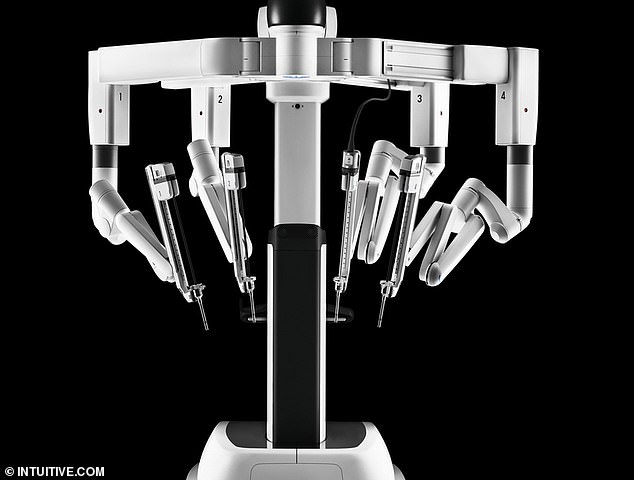 Innovative: The Da Vinci Xi robot has two arms just 8 mm across that hold tiny instruments that pass through spaces too small for the human hand

Aggressive chemotherapy and radiotherapy were recommended — I stopped working, knowing treatment would be gruelling.

I had two fortnight-long courses of chemotherapy in September, which made me very ill. My resistance to infection was so low I was hospitalised twice with sepsis.

Then I had six weeks of radiotherapy, five days a week, which left my throat burnt and swollen. I couldn’t eat or breathe properly, and had to be fed through a tube in my nose. I lost 9st, almost half my body weight, and needed a tracheostomy so I could breathe.

It was incredibly tough, emotionally and physically. After three months of treatment, the cancer had been destroyed.

But, in December 2017, a routine scan found a ‘hotspot’ near the original tumour site and I was referred to Queen Elizabeth Hospital in Birmingham. They found a small (half-centimetre) malignant tumour at the very back of the tongue. I was horrified.

Since this was so hard to reach, I was told my jaw would have to be split to remove it, in a 12-hour operation that could take six months to recover from.

But at the Royal Marsden Hospital in London, I could be operated on robotically, avoiding splitting my jaw and with a much shorter recovery time. I had the operation in 2018 and, after three days in intensive care, I felt surprisingly well — although I was on lots of painkillers. I could eat, drink and breathe normally.

A year on, I’m feeling much better and enjoying time with my three daughters, doing normal ‘dad things’.

Professor Vinidh Paleri is a consultant head and neck surgeon at the Royal Marsden NHS Foundation Trust in South-West London.

Around 9,000 Britons are diagnosed with head and neck cancers each year. Usually linked to smoking and drinking, we are now seeing more cases caused by the sexually transmitted human papillomavirus (HPV).

Symptoms include hoarseness, difficulty swallowing, throat ulcers and lumps in the neck, as James had.

With conventional surgery, we have to split the jaw to remove the tumour. Sometimes, the jawbone is so damaged the patient needs plastic surgery afterwards. 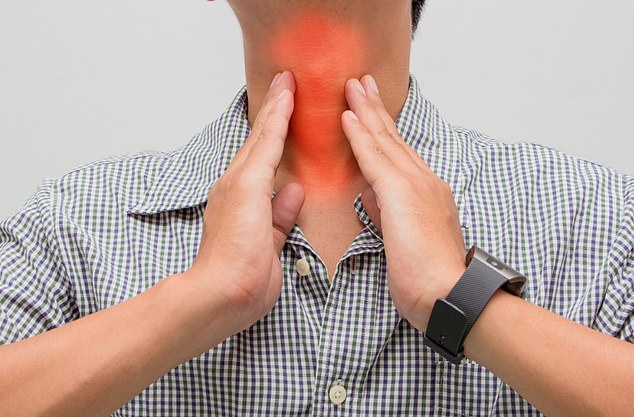 Did you know? Around 9,000 Britons are diagnosed with head and neck cancers each year

WHAT ARE THE RISKS?

Risk of infection or bleeding in 7 to 10 per cent of cases.

Risk of cancer returning in 25 to 40 per cent of cases.

Small risk of damage to teeth, gums or lips previously sensitised by radiotherapy.

But the Da Vinci Xi robot we use has two arms just 8 mm across that hold tiny instruments that pass through spaces too small for the human hand, which means the jaw can remain intact.

The arms, which I control from a console, can move the instruments in ways the human wrist cannot, increasing precision, reducing complications and enhancing recovery. A telescope instrument provides excellent 3D images.

With the patient under general anaesthetic, I open the mouth wide using special retractors, with elastic guards to protect the tongue and teeth.

Then, I place the robot’s arms inside the patient’s mouth and pass an ultrasound probe over the tumour, so the radiologist can assess the size and depth of it as I operate.

The other arm holds a cauterising knife, which cuts out the tumour in one piece. I examine the tissue to check I have got all the cancer, plus a rim of healthy tissue.

Full recovery takes around six weeks, and up to six months if the patient had radiotherapy.

In patients who’ve had recurrent cancers, we see no further recurrence after 55 months in 75 per cent of cases, which is as good as, or better than, conventional surgery, although there hasn’t been a trial to compare the two.

Most patients don’t need further treatment — I am delighted that James is doing well.