Melani De Sousa likens binge-eating to being in a trance. She remembers the ritual of coming home from school and, hidden from the eyes of her parents and sister, consuming whatever she could find in the kitchen. Sometimes it was tablespoons of plain butter, other times it was multiple slices of cake or bowls of cereal. It didn’t matter what it was. 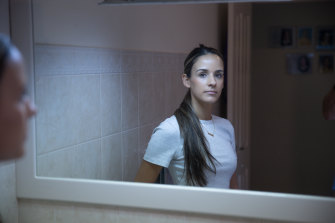 Melani De Sousa lived with a binge-eating disorder for 15 years from when she was nine. “I started using food to cope,” she says. “Feeling my feelings was too hard.”Credit:Photo: Simon Schluter

“You’re not actually tasting a lot of what you’re having,” De Sousa says.

“It’s almost like you are in a daze … and all you care about at that point is shoving food down your mouth.

De Sousa, 32, lived with binge-eating disorder for about 15 years. She tells her story for the fifth episode of youth mental health podcast Enough to shed light on the illness.

De Sousa’s eating disorder came on not long after she moved to Melbourne from South Africa at age 9 and just as her body was beginning to go through the changes that come with puberty. She developed a secret obsession with food.

“I started using food to cope,” De Sousa says. “I just remember the only thing I really looked forward to was eating.”

Binge-eating held immense power over her because it allowed her to detach from her emotional pain, she says.

“Feeling my feelings was too hard – feeling the isolation, the loneliness, the incredible sense of not coping.”

Like many people with binge-eating disorder, De Sousa experienced cycles of bingeing followed by restricting food. These cycles could last a matter of hours. She explains that bingeing would compel her to limit food out of guilt, but this, in turn, intensified a desire to let go of control.

What are the signs of binge-eating disorder?

A person with binge-eating disorder has recurrent episodes of eating a large amount of food in a short period of time (usually under two hours). To meet diagnostic criteria, the episodes occur at least once a week for three months. The warning signs can be physical, psychological, and behavioural.

“It’s like a release,” she says. “And only once that bingeing episode stops do you ‘come to’ and you realise what’s happened. And the guilt hits you like nothing you’ve ever been hit with before.”

She says her eating disorder made her feel like she’d failed and her relationships with family and friends were significantly impacted.

“I had no space left in my brain to deal with anything else,” she says. “I was constantly scared that someone would find out.”

Professor Stephen Touyz, director of University of Sydney’s InsideOut Institute for Eating Disorders, says about 1 million Australian adults are living with the illness, but awareness is low partly because it only became formally recognised as a standalone illness in the Diagnostic and Statistical Manual of Mental Disorders in 2013.

At age 17, De Sousa was incorrectly diagnosed with bulimia nervosa. Both conditions involve consuming a very large amount of food in a short amount of time, but only bulimia involves purging to compensate.

This type of confusion is one of the many ways people misunderstand binge-eating disorder, Touyz says.

“It’s not just ‘eating too much’. It involves eating very rapidly, eating when you’re not hungry at all,” he says. “You have an inability to control what you eat. You cannot stop eating even if you want to.”

“I never knew that the severity of my struggle would be measured in kilograms,” she says.

“I tried to take my life twice because I was at a point where I was like, ‘How much more does a person need to struggle for you to realise this is not a physical condition that you can see?’”

“Telling someone [with binge-eating disorder] to eat less is like telling an alcoholic … to drink less. It doesn’t work,” he says.

Eating Disorders Victoria’s manager of telehealth services, Amy Woods, says many damaging assumptions shroud binge-eating disorder, including that it’s a choice to overeat or it’s driven by greed or laziness.

“Society tends to see people that may be presenting with binge-eating challenges as ‘this is somebody who needs to lose weight or needs to go to the gym or needs to be on a diet’. Whereas really, that’s not the problem at all,” Woods says.

“The emotions that are coming up around food and eating are the primary challenge.”

“There’s all these stereotypical statements, which is why so many people don’t reach out,” De Sousa says.

It’s even more important, now, she says, to spread understanding of binge-eating disorder. During COVID-19, there was a sharp rise in the number of people struggling with an eating disorder. In 2020, there was a 25-50 per cent surge in cases across the public health system.

Young people were particularly vulnerable. A Resolve poll of 16-24 year-olds found that more than a third were dealing with eating-disorder symptoms in the past two years, compared to 16 per cent of those aged 25 and older. Binge-eating symptoms were the most common.

De Sousa runs an allied health business called the Wellness Workshop, which provides one-on-one support and educational programs. She says that inquiries for eating-disorder support grew by 600 per cent during the pandemic and about four-in-five of her clients have binge-eating behaviours.

“[We have] parents calling us who are just at their wit’s end, they are so desperate,” De Sousa says.

The 2022-23 federal budget included $24.3 million in funding for eating disorder services, which the sector has welcomed. However, Touyz believes specialist binge-eating disorder clinics are needed to stop people from falling through the cracks. The demand is there, he says. He co-authored a 2017 South Australian study which found there had been a six-fold increase in binge-eating behaviours across the population over an 18-year period, rising from 2.7 per cent in 1998 to 13 per cent in 2015.

Touyz says treatment is very effective and about half of binge-eating disorder patients recover with psychological methods such as cognitive behavioural therapy. Medication can offer extra help.

At 24, De Sousa started to improve. Disordered eating is, at its core, an unhealthy coping mechanism and De Sousa says she now has 20 different coping mechanisms – from exercise to listening to classical music – to manage emotional struggles. She also learnt to practise intuitive eating, which involves trusting your stomach, not your mind, to make the decision about what you eat.

She knows she has come a long way. “Christmas was the most anxiety-provoking day for me … The idea of having a table full of food just made me feel scared.” 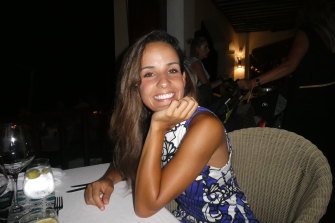 Whereas today, she’s highly in tune with what her body needs and eats both mindfully and freely.

“To be really honest, I didn’t actually know who I was before the age of 24. So much of my sense of self was made up by my eating disorder,” she says. “I’m learning who I am.”