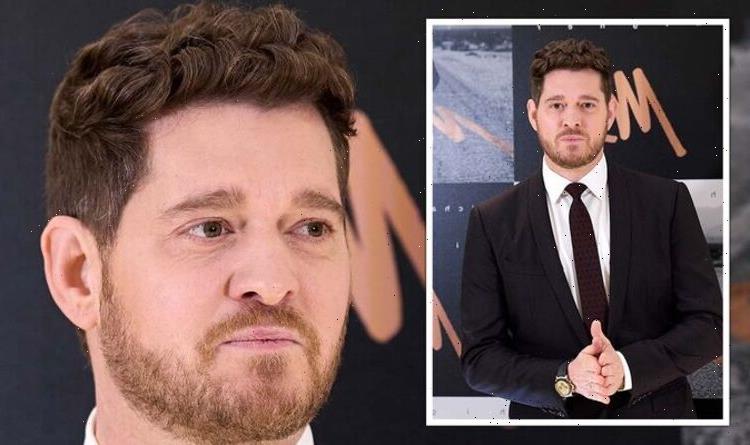 Michael Buble talks about his son Noah on The One Show

In 2016, Buble’s son Noah was diagnosed with Liver cancer – a form of cancer only 20 children in the UK are diagnosed with each year. The Canadian singer, famous for his swing and jazz covers of classic Christmas songs, went off the radar for two years to take care of him. Although he is back now and has an Australian tour scheduled for August, he revealed in a new interview with the Telegraph that for a time he lost a taste for music and didn’t even consider doing it.

He said: “I didn’t think I’d ever perform again. Never. It wasn’t even on my radar.

“I wasn’t even singing in the shower.”

He said his main concern after his son’s diagnosis was “taking care of my family and protecting my mental health”.

Noah was three years old when he was diagnosed and underwent two years of treatment for the condition.

The two main types of liver cancers, in which a malignant tumour forms in the organ, are hepatoblastoma, which is embryonal cancer, or hepatocellular carcinoma.

Together, liver cancers account for one percent of all childhood cancers, making them rare.

Hepatoblastomas grow out of cells in the foetus which are supposed to become liver cells but malfunction and don’t change into liver cells properly.

‘I’ve never met anyone as brave’

On Noah’s eighth birthday in August 2021, Buble praised his son on a social media post. He wrote: “I’ve never met anyone as brave… I’ve never known anyone as kind or as good-hearted…

“And I’ll never truly be able to express how proud I am, or how deep and profound Mommy’s and my love is for you.

“You’ve blessed our lives in every way.”

According to Great Ormond Street hospital, treatment for liver cancer will involve chemotherapy, which occurs before and after surgery.

Sometimes chemotherapy, which uses drugs such as Topotecan, to destroy cancer cells has side effects.

Buble did eventually return to music in 2018 to record the song Love and did his first show in Hyde Park in July 2018, in front of over 50,000 people.

“I came out, and oh my God, I was a mess,” he said in the Telegraph interview.

“For the first time in my whole career, I couldn’t hide emotionally. But it was beautiful. I realised I didn’t have that protective mechanism anymore. And I felt free.”

The common symptoms of liver cancer, especially for adults, are swelling in the abdomen or finding a lump there which can be painful.

Other symptoms, according to the NHS include weight loss, a loss of appetite, feeling sick, and vomiting.

However, most children, the health body explains, do not show symptoms except a large tummy or a lump that can be felt.