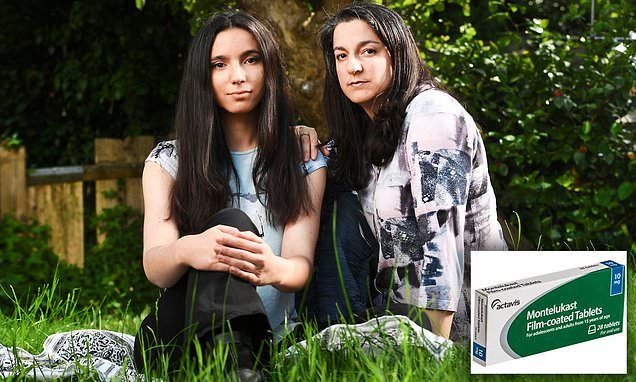 Why did health chiefs clear the asthma drug that can make children suicidal? MoS investigation reveals yet more evidence of pill’s sinister side-effects

Standing frighteningly close to the edge of a 1,500ft high cliff, Yael Borger gazed down into the abyss.

Aged just 16 at the time, and on a youth trip to Israel, a frighteningly powerful force had lured her to the very tip of Mount Masada, facing the sheer drop that falls away into the Dead Sea.

Every thought had melted away apart from one chilling word: Jump.

Recalling the awful moment in 2017, Yael admits: ‘I went right to the edge.

‘I knew exactly what would come of it if I did jump. But I felt that I wanted to do it anyway.

‘In the end I forced myself to sit down to stop myself.’ 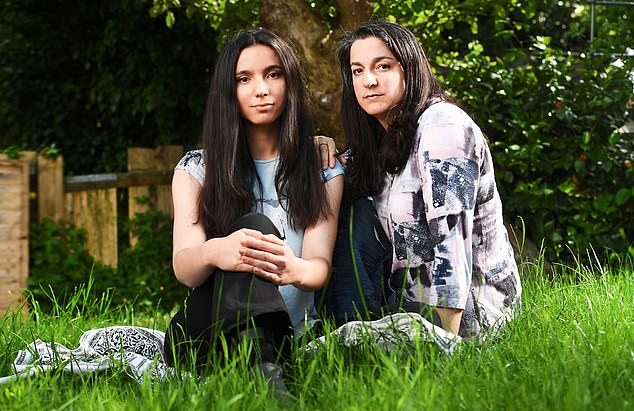 Yael Borger (left) from Edgeware, North London, was 16 when she came close to ending her life while prescribed to asthma drug montelukast, a drug known for its devastating effects on mental health

This was the start of a string of suicidal thoughts that has seen the A-level student consumed by a devastating mental health battle.

Just a year earlier Yael, from Edgware, North London, was put on the powerful and commonly prescribed asthma drug montelukast after being diagnosed with asthma and hayfever.

At first, all was well. The highly effective drug, taken as a tablet, brought her worsening symptoms under control.

But within a year, signs started to emerge that her mental health was deteriorating – and today, she and her family are convinced it is the drug that was responsible.

‘I suddenly started having crazy thoughts. I kept being seized by this inexplicable urge to kill myself,’ she admits.

Yael’s mother Le’at, 41, a graphic designer, said: ‘My husband and I noticed Yael becoming more anxious. She developed a fear of meeting people, of speaking to people, and didn’t want to go to school.

‘She was a normal, bright, bubbly girl and had never shown any signs of mental health problems before.’ 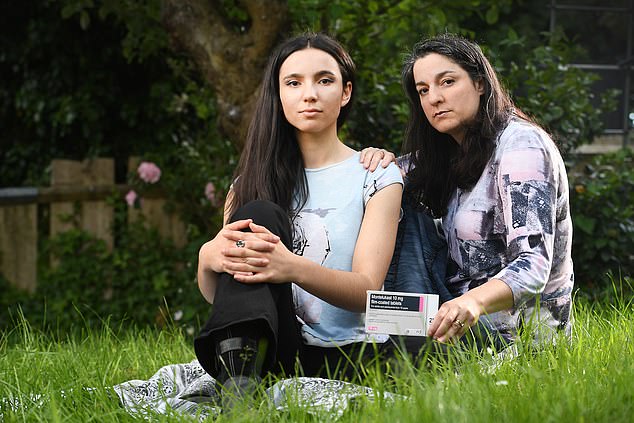 Yael’s mother Le’at, 41 (right), a graphic designer, noticed a change in her daughter’s behaviour and attitude and began researching all her daughter’s asthma medication. Ms Borger was shocked to discover montelukast noted ‘suicidal thoughts’ as a side effect

What she discovered shocked her. ‘In the side effects for montelukast, it mentioned ‘suicidal thoughts’.

‘No one had ever warned me but, of all her medication, it was the only one that mentioned it.’

In late 2017, Le’at called a meeting with her daughter’s allergy consultant and told her she wanted Yael taken off the drug.

The consultant agreed and, in fact, Le’at got Yael to stop all her asthma medication and gradually reintroduce them – apart from montelukast.

Her moods began to stabilise, with the help of antidepressants, and Yael, 18, says: ‘Being put on montelukast turned my life upside down.’

A CUT-PRICE PILL WITH DEVASTATING EFFECTS

Over the past months, reports in this newspaper have revealed the shocking toll that montelukast is having on the mental health of hundreds of sufferers.

In response, dozens of readers have been in touch with similar stories about devastating side effects, which include hallucinations, night terrors and suicidal thoughts.

Montelukast has been available since 1998 and is given to patients – including children – whose asthma cannot be controlled by steroid inhalers, the usual treatment.

The drug, also known by the brand name Singulair, works by blocking chemicals released by the body that cause the airways to swell and constrict during an asthma attack. 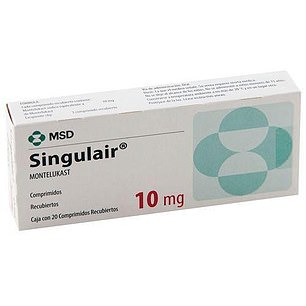 The drug, also known by the brand name Singulair, works by blocking chemicals released by the body that cause the airways to swell and constrict during an asthma attack (stock image)

It has been proven to save lives, and for the majority of patients there are few, if any, side effects. The most common is drowsiness, so for this reason the medicine must be taken at night before bed.

Yet a recent study in the European Respiratory Journal found one in eight children developed ‘neuropsychiatric adverse drug reactions’ which were ‘definitely or probably related’ to the drug.

And last week, this newspaper carried the tragic story of talented rugby player and law student James Burke from Leeds, who hanged himself at home in April 2017, aged 21, after suffering years of anxiety and depression.

His mother Sharon, 55, said: ‘James took the final decision to kill himself, but that drug [montelukast] put him in the frame of mind to do it.’

The drug, first made by American firm MSD, has been available since 1998. They sold it under the brand name Singulair.

But in 2013 the patent ended, meaning other firms have been free to make generic versions, sending its cost plummeting from around £27 for a one month supply to just £1.

As a result of the price drop, in 2016, prescribing watchdog the National Institute for Health and Care Excellence (NICE) issued guidance recommending doctors offer the drug widely – a move that has saved the NHS almost £50 million, with GPs and specialists only prescribing the generic versions, according to official figures.

In 2018 there were almost three million prescriptions for the drug on the NHS in England alone. 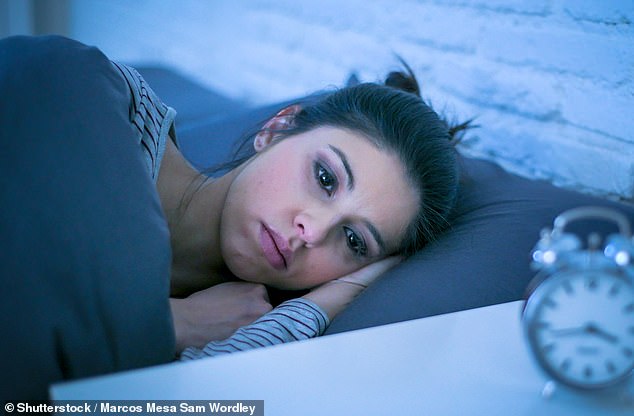 In the US, labels on montelukast have a warning about mood changes. There is no similar warning on the drug in Britain but suicidal thinking, nightmares, insomnia, anxiety, aggressive behaviour and depression are listed as very rare or uncommon side effects (stock image)

However, patients will have multiple prescriptions over a year, and there is no official data on exactly how many children are on montelukast.

The move came despite the United States Food And Drug Administration issuing an alert in 2008 about an increased risk of psychiatric events associated with montelukast.

In the US, labels on the drug carry a warning about mood changes.

There is no similar warning on the drug in Britain, although suicidal thinking, nightmares, insomnia, anxiety, aggressive behaviour and depression are listed as very rare or uncommon side effects in patient leaflets contained in boxes of the medicine.

In the wake of our reports, last night the Medicines And Healthcare Products Regulatory Agency, which is responsible for drug safety in the UK, confirmed an update ‘as a matter of priority’ which will be completed in August.

The new leaflet will read: ‘Patients should be aware that… behaviour and mood related changes have been reported in adults, adolescents and children with montelukast.

If you or your child develop(s) such symptoms while taking montelukast, consult a doctor.’

The body also confirmed there have been 654 psychiatric reactions to montelukast reported to it by the public since 1998, 458 of which are considered ‘serious’, including three deaths.

Dr Ian Balfour-Lynn, a consultant in paediatric respiratory medicine at the Royal Brompton Hospital in London, says the mental impact of the drug is well-known.

‘In young children taking montelukast, it is common to see bad dreams and disturbed thoughts. Every doctor prescribing this drug should warn parents this is a possibility.’

Health experts also urge any patients concerned about side effects to not quit their medication – the risk of death from an asthma attack is far greater than that from the drug. Instead, it is important to seek medical advice.

THE HAPPY CHILD WHO ENDED UP SECTIONED

Annabelle Miller’s stepdaughter Amelia, 18, ‘is not the person she was’ after being prescribed montelukast two years ago for her chronic asthma.

Annabelle, 59, an NHS negotiator for pharmaceutical companies from London, says Amelia has tried to commit suicide at least 15 times, has been sectioned and kicked out of two schools.

She says: ‘There is no question that this is a very effective drug. Amelia had terrible asthma and this definitely improved it. But after my bright, happy, intelligent daughter was put on montelukast when she was 16, she progressively developed mental health problems. Our daughter has gone from being a happy child to being sectioned for repeated suicide attempts.’

Amelia was taken off montelukast after an attempted overdose.

Her distraught stepmother continued: ‘She has repeatedly run away and taken overdoses, imagines dead people, hears voices and becomes aggressive and difficult to deal with.’

Annabelle wants all GPs to warn about the possible side effects of montelukast before prescribing it. She says she wasn’t told.

According to Asthma UK, the NHS spends around £1 billion a year treating and caring for people with asthma. There are around five million patients in the UK receiving treatment for the condition – one million of them children.

Dr Daniel Hawcutt, a senior lecturer in paediatric pharmacology at the University of Liverpool, said: ‘If you give montelukast to children with asthma, you do get an improvement. 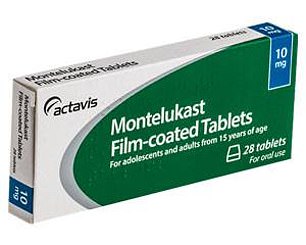 Annabelle Miller, 59, an NHS negotiator for pharmaceutical companies from London, said her stepdaughter Amelia tried to commit suicide at least 15 times, was sectioned and was kicked out of two schools while on montelukast (stock image)

‘But psychiatric drug reactions in children and adolescents are absolutely recognised in these drugs. Bad behaviour, bad dreams and depression have all been reported.’

Dr Balfour-Lynn says: ‘This drug can be effective and important, especially in young children who refuse to use inhalers or find them uncomfortable. It is the only option we have. Suicidal thoughts are a known side effect but only in very, very rare cases. As long as parents are warned about the potential side effects, the benefits of the drug outweigh the risks.’

COULD DRUG HAVE AN EFFECT ON THE BRAIN?

In 2017, Dutch researchers suggested that the drug may, as an unintended effect, inhibit the production of the brain chemicals serotonin and noradrenalin, both known to affect mood.

Drug expert Professor Simon Maxwell, at the University of Edinburgh, says: ‘We know that a lot of medicines get into the brain and are associated with changes in mood, sometimes seriously.’

There is a known link between asthma – regardless of what medication is taken – and psychiatric illnesses. 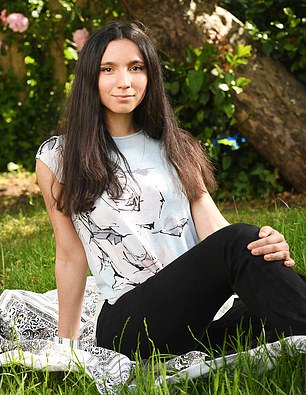 Yael (pictured) has no doubt it was the drug that caused her anguish. She says: ‘I know the drug has had a huge impact on me. I want others to be aware of what it can do to you’

A review of numerous studies published in 2015 concluded: ‘Asthmatics may be at an increased risk of suicidal behaviour across all ages.

‘The possibility of asthma medications exacerbating suicidal behaviour is still unclear, and more research is needed in this area.’

Prof Maxwell says: ‘Depression and psychological problems are fairly common. Asthma may be linked to these problems anyway, primarily because it is a chronic disease that negatively impacts – to a greater or lesser extent – on what would otherwise be, in many cases, young, active, healthy lives.’

Yael Borger, however, has no doubt it was the drug that caused her anguish. She says: ‘I know the drug has had a huge impact on me. I want others to be aware of what it can do to you.’