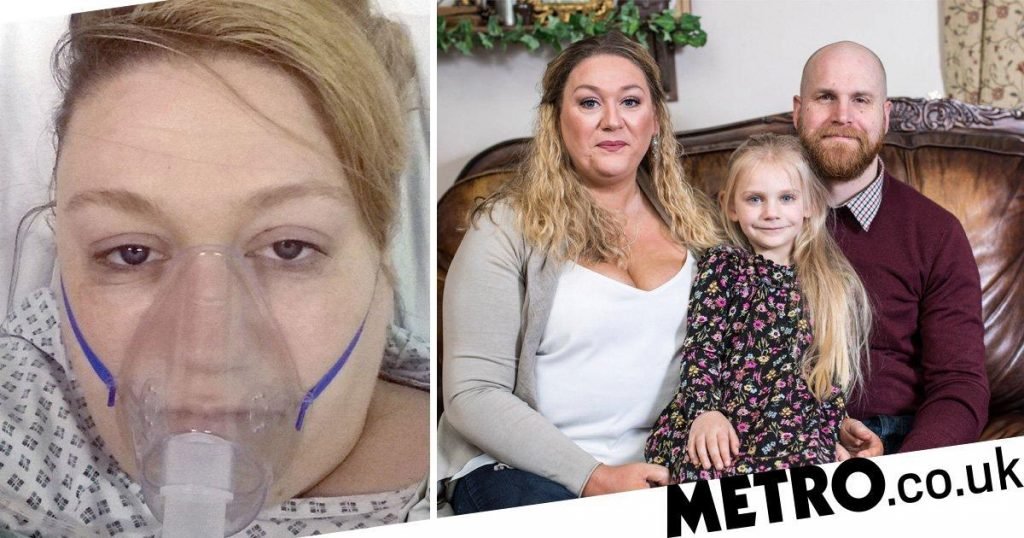 ‘Looking back, I had all the symptoms of ovarian cancer but it was all just passed off as part of my new life as a mum.

‘Gradually my periods became heavier and I was using two layered maxi size incontinence pads every hour. At one point I was visiting my A&E department every two to three weeks for around 18 months.

‘Finally I was referred to gynaecology and diagnosed with a mass.

‘It took weeks before I was actually diagnosed with cancer as they thought it was just a cyst and it was so frustrating.

‘I wanted to scream from the rooftops, ‘I have been telling you this for years, why didn’t you listen?’

‘The word cancer is such a huge thing. After the initial diagnosis, my whole world crashed around me, I didn’t know where to turn.

‘Thankfully my husband, Mark, 38, was really supportive and we got through it together.

‘After a full hysterectomy which threw my body into early menopause, I was cancer free and was given three years all clear in May.’

Claire was told she had three tumours removed after her life-saving surgery but was thankful it hadn’t spread.

She added: ‘My biggest tumour was 10cm by 6cm, we named him Gerald.

‘I couldn’t believe it when they told me I had two other smaller tumours too, it’s a miracle it didn’t spread in two years.

‘I was also so overwhelmed with information. One day I was out walking with my husband, and I was thinking about our daughter, Eirwen, living her life without me. Suddenly, the image of a banana popped into my head.

‘It sounds strange, but I can honestly say that it stopped me from breaking that day.

What are the symptoms of ovarian cancer?

Occasionally there can be other symptoms:

‘After that, bananas became kind of a symbol of hope for me and my family. They were a reminder to us that no matter what you go through, there’s always a ray of light.

‘When I got told I was in remission, we threw a Christmas party to celebrate – in September!

‘I decorated the entire house and left it up for the rest of the year. I want my daughter to look back and remember that as the year her mum was crazy enough to celebrate Christmas for four months, rather than the year mummy was ill.’

Claire is sharing her story to raise awareness of the symptoms of ovarian cancer.

She said: ‘I also want women to know that, just because the person in front of you has a doctorate of medicine, it doesn’t mean they know more about your body than you do.

‘If you know something is wrong, go back and question things. You know your body better than any doctor.

‘I didn’t have postnatal depression, I had cancer.

‘I’m not angry about my misdiagnosis but I hope my story helps other women in the future.’

Claire has been supported by Target Ovarian Cancer – a leading UK charity for the disease.

Alexandra Holden, Director of Communications, Target Ovarian Cancer, said: “Eleven women die every day from ovarian cancer in the UK. There is no screening and one in five women is too ill to treat by the time they receive a diagnosis.

‘Our research shows that one in five women mistakenly think a smear test can detect ovarian cancer. In reality, with no screening programme, it is even more important that women know the symptoms.’