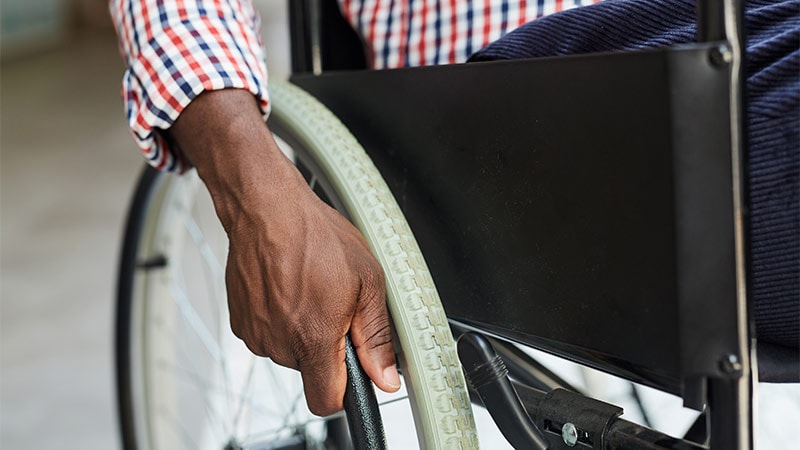 SEATTLE – Multiple sclerosis (MS), sometimes thought of as primarily affecting Whites, is also common among Hispanic and Black people. These populations often have more severe disease, likely driven by socioeconomic factors and health care access, according to a new study that examined neighborhood-level data and disease severity in the United States.

“It has previously been thought that MS is less common among non-European Caucasian White populations, driven partly by the well-known association of incidence with latitude. It is abundantly clear at this point that this idea is not true,” said Christopher Orlando, MD, during a presentation at the 2022 annual meeting of the American Academy of Neurology.

He noted that several U.S. studies with large sample sizes have shown greater disease severity and a higher disability burden among Hispanic and Black patients. “Black patients in particular appear to have a higher incidence of disease and a greater proportion of progressive disease phenotypes,” said Orlando.

Race and ethnicity are unlikely explanations for this disparity, according to Orlando. “While much remains to be discovered of the genetic underpinnings of MS, what we do know does not support the idea that minorities would have a predilection to more severe disease. For example, the well-known high-risk allele HLA DRB1*1501 appears to have a lower frequency in African populations, compared with European [populations].”

Instead, evidence suggests that interrelated social causes include access to resources, environmental exposures, and psychosocial stress. “These affect health via a number of pathways including direct physical injury, allostatic load, and access to health care,” said Orlando.

Previous studies that corrected for social determinants of health such as socioeconomic and insurance status reduce the association between MS disability and race, but they do not completely explain it.

To get a better understanding of the impacts of these factors, researchers have used neighborhood-level data combined with information on socioeconomic status and social deprivation to identify associations with MS severity.

At the conference, Orlando presented a new study that is the first to use this methodology in the United States, and it is the first to apply it to the study of racial and ethnic disparities in MS.

The study confirmed more severe disability in Hispanic and Black patients than in White patients. Clinical factors associated with more severe disease were similar across the three groups, with some small differences among individual traits. “More stark differences appeared when we compared social determinants of health. Hispanic patients were less likely to speak English as a primary language or to complete 12 years of education. Black patients were less likely to live in a rural county and more likely to be unemployed. One particularly stark difference was in the number of unemployed specifically due to their MS, with only 1 White patient [1.1%], 7 Hispanic patients [7.8%] and 27 Black patients [31.0%],” said Orlando.

The researchers found that Black and Hispanic patients tend to live in more vulnerable neighborhoods than White patients. The researchers found no significant association between social vulnerability index (SVI) values and MS severity, though there was an association in a separate analysis that only included White patients. The SVI uses 15 measures taken from the U.S. Census to identify communities that might require additional support during natural disasters.

“It would appear that the sheer complexity both in variety and magnitude of the social determinants of health are such that by far the stronger association is with race and ethnicity, which are surrogates for any number of social determinants and societal inequities,” said Orlando.

What drives the inequity?

Orlando acknowledged that some might wonder if these results indicate a true biologically intrinsic factor such as genetic predisposition. “I want to warn against that kind of thinking in the strongest possible terms. It is implausible on several levels. It’s not biologically plausible based on our understanding that race and ethnicity are not genetic constructs. And it’s also not numerically plausible based on these data,” said Orlando.

While some of the drivers of this inequity have been partially examined, many have not been studied. “As long as this is the case, our ability to fulfill our roles as physicians will be limited in several important ways. Our ability to assess our patients’ individual risk will be missing key information, which will limit the efficacy of shared decision-making, which of course is the cornerstone of MS treatment. In addition, we will continue to struggle to include minority patients in our research studies, and the very design and results of those studies may be misguided, as we will either fail to include these populations, or we will fail to adjust for important confounders,” he said.

The neighborhood-level data examined by Orlando’s group “brings extra information in terms of the negative impact of social determinants of health. The disparity seen in neighborhood living is quite striking,” said Lilyana Amezcua, MD, who served as a discussant for Orlando’s presentation. The study reinforces findings of her own group in Hispanic and Latinx individuals with MS. Some comorbidities are more common among these groups, which is exacerbated by poor health access.

“We have noted that almost 30% of them also have this comorbidity of hypertension, but what is also observed is that only 7% of them are aware [that they have hypertension],” said Amezcua, who is an associate professor of neurology at the University of Southern California, Los Angeles.

The findings should prompt further research to understand the impact of systemic racism and neighborhood factors, such as disinvestment in the public and private sectors, underresourced hospitals and clinics, and negative infrastructure. “We need to start discussing the (patient’s) environment so we can better understand the community resources they may have available, as well as create innovative transitional care services. We need to also recognize and accept that structural racism and imbalanced distribution of resources and neighborhoods does restrict educational and economic opportunities, as well as health care access and the safety of these marginalized communities,” said Amezcua.

Amezcua has consulted for, received speaking fees from, or served on steering committees or advisory boards for Biogen Idec, Novartis, Genentech, and EMD Serono. She has received research support from the Bristol-Myers Squibb Foundation and Biogen Idec. Orlando has no relevant financial disclosures.

This story originally appeared on MDedge.com, part of the Medscape Professional Network.