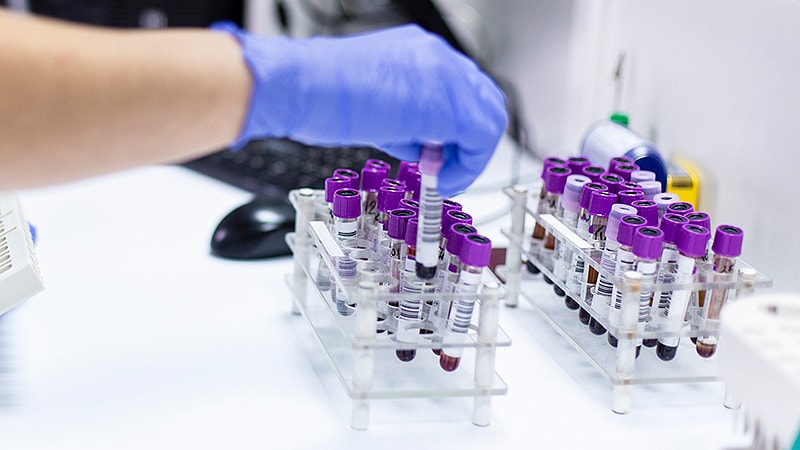 Sepsis is among the most feared conditions for healthcare providers. These blood infections strike with such rapid intensity that treating them demands a mix of both clinical skill and luck — recognizing symptoms early enough while choosing the right drug to tame the bacterial culprit before the germs have overwhelmed the body’s immune system.

All too often, sepsis wins the race. According to the US Centers for Disease Control and Prevention, at least 1.7 million people in this country develop sepsis annually. About 350,000 die during hospitalization or are discharged to hospice.

But new research published in Proceedings of the National Academy of Sciences offers hope that clinicians may one day be able to detect and treat sepsis more quickly.

The researchers broke down whole blood and dried it by heating, resulting in a solid porous structure with the bacterial DNA trapped inside. They then used chemicals — primers and enzymes — to reach inside the porous structure and amplify the target DNA.

The technique took just 2.5 hours and required roughly 1 mL of blood, according to the researchers.

“This technique can have broad applications in detection of bacterial infection and presence of bacteria in large values of blood,” Rashid Bashir, PhD, dean of the University of Illinois at Urbana-Champaign’s Grainger College of Engineering, and a co-author of the study, told Medscape Medical News.

While infection control experts and sepsis prevention advocates said the new study offers no clues about how to treat sepsis once detected, they hope the innovation eventually could save lives.

Sepsis occurs when the body overreacts to an infection. The severe response can lead to can to tissue damage, organ failure, and death.

Thomas Heymann, MBA, president and CEO of Sepsis Alliance, an advocacy group, said mortality can rise 8% for each hour treatment is delayed.

Infants born prematurely are particularly vulnerable. Bashir and his colleagues noted that 25% of all infants admitted to the neonatal intensive care unit are diagnosed with sepsis. Of those, as many as 35% may die from infection. Sepsis is the most expensive condition treated in US hospitals, accounting for $23.7 billion in costs annually, they added.

Despite high mortality rates and hospital costs, according to a Sepsis Alliance survey, only 66% of Americans are aware of the term sepsis. Only 19% can name the four primary signs of the condition: Altered body Temperature, an Infection, Mental decline, and feeling Extremely ill, or “TIME.”

Getting the appropriate antibiotics to sepsis patients quickly can greatly improve chances of survival, but Bashir said the current method of confirming the diagnosis is too slow.

​Traditional blood cultures are among the most common methods of ​determining if a patient has a bloodstream infection. But the process takes about 24 hours for a culture to detect ​the category of bacteria and an additional day to determine exactly which bacteria is present, according to Cindy Hou, DO, infection control officer and medical director of research at Jefferson Health, Voorhees Township, New Jersey. At 72 hours, Hou said, a blood culture will finally be able to produce a “sensitivity” result, which tells doctors which antibiotics will be most effective against the pathogen.

By then, patients often are already past the point of saving. The bottom line, according to Bashir and his colleagues: Blood cultures are “too slow and cumbersome to allow for initial management of patients and thus contributes to high mortality.”

Hou called the ability to identify the type of infection in just 2.5 hours an “amazing” feat.

“With sepsis, ​it is helpful to have rapid diagnostics where results come back quickly. Rapid is never rapid enough,” she said. “These researchers are pushing the bar for what rapid means.”

The new detection method is not yet available commercially. Bashir said he and his colleagues plan to scale their study and hope to find a way to bypass the long culture steps to identify target pathogens directly from a large volume of blood.

Hou said she believes a blood culture would still be necessary since clinicians would need sensitivity results to guide targeted treatment of infections.

“There is a lot more we need, but this paper is a call to arms for the field of rapid diagnostics to make rapid as fast as it really needs to be, ​but we still need to find solutions which are affordable,” Hou said.

Even without a blood culture, Bashir’s technology could improve care. Heymann said the technology could help convince clinicians worried about antibiotic resistance to prescribe treatment faster.

“We know we’re overusing antibiotics and that’s creating a new big problem” when it comes to sepsis treatment, he said. “Getting a diagnostic read earlier is a game changer.”

Combined with a blood culture that can later confirm or help adjust the course of treatment, Hou said this new method of sepsis detection could improve care, especially in places where rapid diagnostics are not available and particularly if combined with physician education so they understand what treatment is best for various types of infection.

“We’re losing someone every 90 seconds in the United States to sepsis,” Heymann said. “There is a huge opportunity to do better and it’s this kind of innovation that is really inspiring.”

Hou is chief medical officer for Sepsis Alliance​, a medical advisor for the Sepsis Innovation Collaborative, an advisor for Janssen, and a key opinion leader for T2 ​Biosystems. Bashir and Heymann report no relevant financial relationships.

Kerrie Rushton is a freelance writer living in Maryland.