The NHS is investigating doctors’ surgeries in England to stop them claiming millions of pounds for patients who don’t exist.

More than three million ‘ghost patients’ may be on GPs’ books around the country despite having moved away or died.

And surgeries may be making as up to £88million off these patients who will never use the services but for whom the NHS pays practices £150 per person per year.

The health service is now paying a contractor to go through GP patient lists and reach out to people who haven’t contacted their doctor for five years or more. 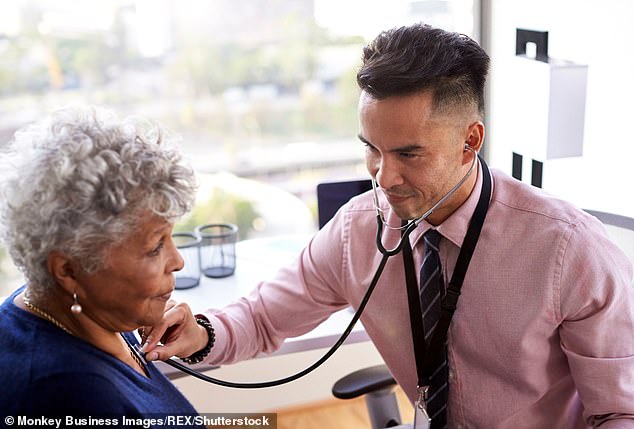 GP surgeries are paid £150 per patient per year on their lists but many may be taking money for patients who don’t exist, the NHS Counter Fraud Authority said (stock image)

The NHS Counter Fraud Authority has launched its investigation as it announced it will try to protect the health service from more than £120million in fraud this year.

Senior doctors insist it is unlikely surgeries are deliberately claiming money for patients they will never treat.

‘Some of these will be people that have recently died, or left the country, others may be homeless or simply unaccounted for in government statistics,’ the British Medical Association’s Dr Richard Vautrey told the BBC.

‘We would be concerned at any suggestion that any discrepancies are down to wilful deception by hard-working GPs.’

The CFA estimates as much as £88million could be being claimed for 3.6m non-existent patients, which would be one per cent of the entire budget for GPs.

Surgeries are privately owned but get public funding based on their size, with those treating more patients getting paid more by the central NHS.

Practices in England have an average of 8,490 patients on their list, with the largest – the Princess Street Group Practice in south-east London – having 73,525.

Despite claims doctors simply don’t know when people have moved away or died, fraud investigators also say they have noticed suspicious ‘anomalies’, the BBC said.

So experts will analyse detailed NHS records to work out whether some surgeries have been deliberately defrauding the health service to get more funding.

The work will be carried out by the controversy-hit contractor Capita, which has made major blunders while administrating cancer screening programmes.

Susan Frith, the CEO of the CFA, said: ‘By preventing fraud, by identifying it and tackling it effectively where it occurs, and by seeking to recover moneys lost to fraud we can ensure that precious NHS funds are used for their intended purpose of patient care.’

The CFA revealed its priority action plan on Monday this week in which it outlined headline targets to stop £127million being lost this year.

Professor Helen Stokes-Lampard, chair of the Royal College of GPs, said: ‘The insinuation that GPs – some of the most trusted professionals in society – are complicit in defrauding the health service is shocking.’

She added it ‘will be incredibly hurtful for hard-working GPs and their teams who are struggling to deliver care to more than a million patients a day across the country, with insufficient time, resources or workforce to do so’.

‘It is, of course, important to make sure that patient lists are kept as up-to-date as possible, so that resources are used where they are most needed,’ she said.

‘And our administrative staff already spend a lot of time processing patients’ notes when we are informed that they have died, left the surgery or moved elsewhere.

‘But so-called ‘ghost patients’ are nothing sinister – they are the result of a records management issue, not a case of surgeries deliberately profiting by keeping patients on their lists when they shouldn’t be there.

‘People’s circumstances, and therefore, our records, change all the time.’

GP practice list sizes in Britain grew by almost half between 2004 and 2018, an investigation has found.

NHS data showed 59.6million people were registered with one of 7,017 practices in December 2018.

This translates to bigger workloads for individual GPs and longer waiting times for patients and, in a time when GP recruitment has stalled, has added to crippling pressure on many surgeries.

A record 138 GP surgeries closed in 2018, affecting millions of people.

Professor Helen Stokes-Lampard, chair of the Royal College of GPs, a doctors’ union, said in December: ‘GPs and our teams are making more consultations than ever before.

‘More than one million across the country every day – but the share of the NHS budget that general practice receives is less than it was a decade ago.

‘Whilst the number of patients we are delivering care to is growing, we actually have fewer GPs than we did two years ago.’