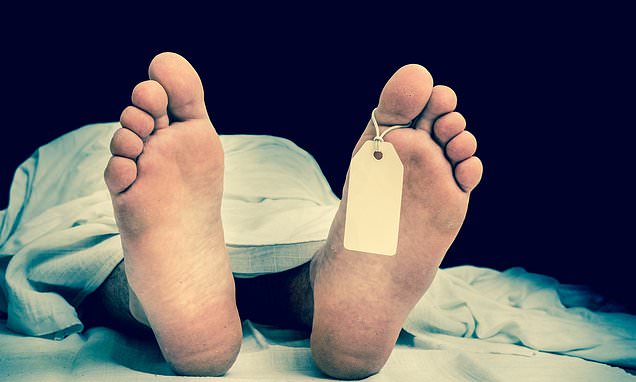 The NHS is stockpiling body bags amid fears the UK while run out in a no-deal Brexit.

Health Minister Stephen Hammond made the revelation in a letter to an unnamed Tory MP, which has been leaked on Twitter.

Mr Hammond wrote precautionary efforts are being made to ensure medical supplies are not affected when the UK is due to leave the European Union on March 29.

Extracts from the letter were leaked on Twitter. Health Minister Stephen Hammond wrote to an unnamed Tory MP claiming ‘the continuity of supply of all medical products is essential’

The NHS is preparing for ‘all exit scenarios’, which includes stockpiling body bags, Mr Hammond wrote.

He added it is ‘essential’ to ensure all medical products are accounted for, including medication, vaccines and ‘consumables, including body bags’.

Consumables are defined as commodities that are intended to be used up quickly.

Many of these products come to the UK ‘from or through the EU’, with provisions being made to ensure ‘the supply is not disrupted’.

The letter came to light after extracts were posted on Twitter by ITV journalist Robert Peston. The post has since been liked 2,889 times and retweeted 3,300 times.

In response, a spokesperson for the Department of Health and Social Care said: ‘We are taking comprehensive action to ensure the NHS has continued access to products needed to deliver safe, effective care.

Britain’s main supplier of insulin said in September it would be stockpiling the medicine in case Brexit disrupts the international supply chain.

Around 4.6million people in the UK are thought to have diabetes and many of them rely on insulin to stay healthy.

Danish healthcare company Novo Nordisk supplies more than half of the UK’s insulin and revealed it would import enough of the vital medication to last four months.

The move came just weeks after medical experts warned millions of diabetics would be at risk if there was an insulin shortage after Brexit.

Novo Nordisk claimed it is committed to making sure its patients are not affected.

The company said at the time it planned to build up a 16-week reserve of insulin by this month.

‘If everyone does what they should do, we are confident the supply of medicines and other medical supplies will be uninterrupted in the event of exiting the EU without a deal.’

Every month, around 37million packs of medicines are imported into the UK from the EU, RT reported.

If Prime Minister Theresa May does not manage to make a deal with EU leaders in Brussels, temporary arrangements could be put in place to ensure the free flow of vital medication.

This is due to some items, such as bandages and pacemakers, receiving their EU safety certification in the UK.

A no-deal could cause these certifications to become void, meaning they would have been sourced from elsewhere.

This comes after the Netherlands’ health minister Bruno Bruins claimed there are 50 life-saving medicines that are supplied by the UK and have no suitable alternative on the Dutch market.

Hospitals in Holland have warned people’s lives could be put at risk if drug supplies across the Channel are interrupted.

Mr Bruins refused to reveal the names of the drugs out of fear other countries would hoard them.