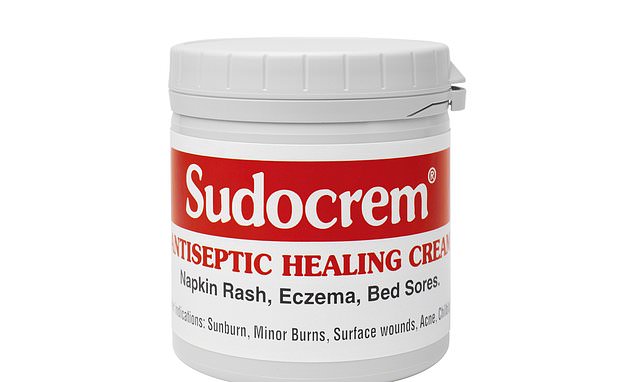 Doctors have today been urged to cut back on dishing out antibiotics for impetigo and give patients antiseptics instead.

Normally patients will be given antibiotics by their GP to halt the rapidly spreading and highly contagious bacterial infection.

But officials have now told doctors to stop doling out the drugs for most patients amid a ‘global threat’ of antibiotic-resistance.

Public Health England the National Institute for Health and Care Excellence (NICE) made the joint ruling in draft guidance.

They said GPs should give patients with the most common form of impetigo – non-bullous – antiseptic creams, which include Sudocrem. 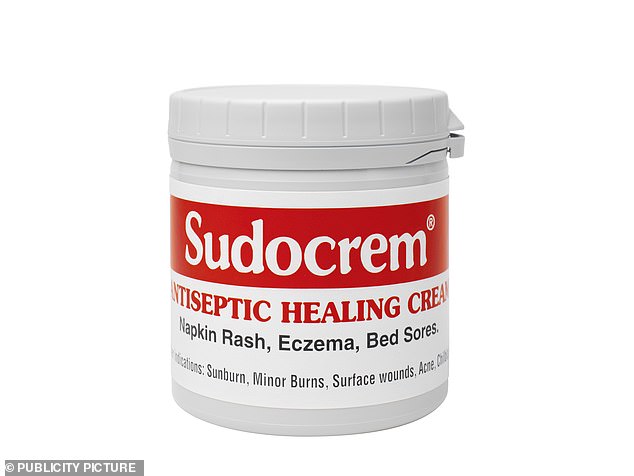 NICE said evidence suggests topical antiseptic creams with hydrogen peroxide – antiseptic in liquid form – are just as effective as antibiotics for treating non-bullous impetigo. But they also said other antiseptics could be used. A popular brand is Sudocrem (pictured)

The bodies said ones that contain hydrogen peroxide appear to work best for the treatment of the specific type of impetigo.

They found applying the creams for five to seven days improved symptoms and may have less side effects than antibiotics.

Crystacide one per cent cream, which is a prescription-only medicine, is the only available cream in this category.

Other antiseptics could be used, the bodies said, which could include over-the-counter brands such as Sudocrem, Germolene and Dettol.

Impetigo is the most common skin infection in young children, causing red sores, blisters and crusts, the NHS says.

It usually clears up on its own in three weeks. Antibiotics help reduce the spread of infection around school or work and speed up recovery.

Doctors should already advise on hygiene and the use of gentle antibacterial soaps and water to gently remove skin crusts.

If antiseptic does not work or the impetigo is widespread, an antibiotic cream should be given instead, such as fusidic acid or mupirocin.

The bodies said the last option for treating the infection should be an oral antibiotic, such as flucloxacillin.

Impetigo is a skin infection caused by a bacterium; the commonest ones are staphylococcus or streptococcus.

It usually starts as small blisters, anywhere on the body but often on the face, which join up forming bigger areas of pus under the skin. The skin often peels off leaving sore, red, raw patches which dry with bright yellow crusts.

These heal from the centre outwards and may leave red rings of skin around the edge as they do so.

Impetigo is very itchy and highly contagious. This is why it can whip through nurseries, playgroups and families.

To reduce the spread at school affected children have to stay at home. But this does not reduce the risk of spread within your own family and the infection can be prolonged.

Treatment nearly always requires antibiotic cream, such as fucidin, or in established or recurrent cases, antibiotics by mouth for up to ten days.

If the infection won’t go away, the GP usually needs to send swabs to be tested.

Sometimes one or more children in a family or another member of the family may continue to carry the bacterium in their nose.

Also referred to as a skin disinfectant, antiseptic is a substance used to kill bacteria on intact skin or in a wound.

‘We know that the more antibiotics are prescribed, the greater the risk of bacteria becoming resistant. So we want to try and reduce unnecessary prescriptions.’

Health officials are cracking down on the overuse of antibiotics, focusing on a variety of common bacterial infections often treated with the drugs.

NICE said: ‘The overuse of antimicrobials is contributing to a global threat of worldwide antimicrobial resistance.’

Antibiotics have routinely been given out for a range of problems in the past, but this has made them less effective.

It has also led to the emergence of ‘superbugs’ – the most challenging infections to treat because they fail to respond to so many drugs.

According to the British Skin Foundation, antibiotic creams are becoming less successful in treating impetigo.

They state: ‘For this reason, creams containing antiseptics such as povidone iodine or chlorhexidine may be recommended as an alternative.’

For patients with bullous impetigo, at risk of complications or who are showing signs of being unwell, oral antibiotic should still be given, NICE and PHE said.

The guidance also now says that combination treatment with a topical and oral antibiotic should not be used to treat impetigo.