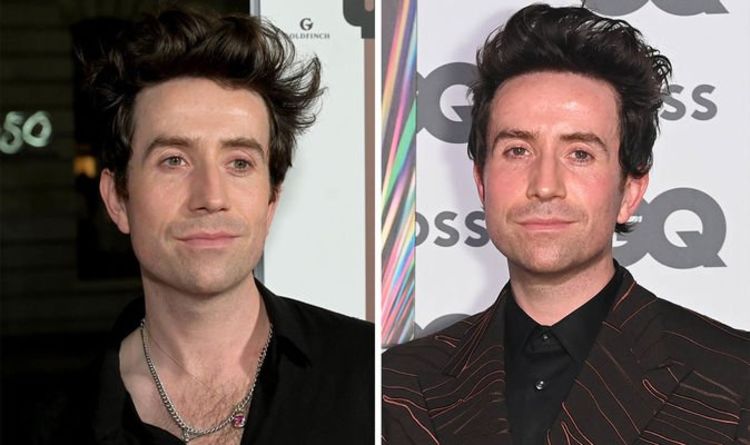 Swapping his hardcore party lifestyle for the picturesque scenery of Northumberland, Nick, or as he is known within the industry, Grimmy, filmed the latest show himself, each episode asccompanied with a different celebrity. After nearly 14 years at BBC Radio 1, the star said that he decided to take some time off to “consider his options”, but could never turn down the chance for a brisk countryside walk. More than a way to merely exercise, Nick also said that each episode was like a “therapy session” with himself, something which Nick personally values after suffering from severe anxiety.

In the past Nick has spoken publicly about his mental health. Last year he spoke about how he had tried to manage his anxiety for years, but a failure to do so had led to panic attacks.

Nick explained: “I’ve had horrible anxiety that won’t go, and have been feeling down, with really horrible panic attacks.

“I’m not here being like, ‘I’ve got severe anxiety.’ But I suffer with anxiety, and when it’s bad, it’s bad.”

The star continued to explain that he first experienced anxiety when at university, but it was big career moves, such as taking over from Chris Moyles on the Radio 1 breakfast show in 2012, that had made his anxiety return.

Then in a recent trek across the Namib desert all in aid for Sports Relief, the star suffered yet another panic attack. In fact, the 35-year-old was close to suffering organ failure whilst cycling in 44 degree heat.

“I’m gonna be one of those annoying people who does a trek and is like: ‘I was changed in Africa,’” he told The Guardian.

“When I got back to London, I wrote everything down – exactly how I was feeling – so I didn’t forget it. Because it felt really good, and I just want to feel like that forever.”

On returning from his “life-changing” trek in Africa, the whole world was thrown into a lockdown due to coronavirus, something which Nick said was “quite weird”.

Talking to the Metro when lockdown had begun, he said: “You’re on your own for a lot of that, or it’s just you and one team member for hours on your own. It’s quite weird coming back from that and then we had a few weeks of freedom and then straight into lockdown.

“I think structure is key for me. I like to think that I don’t like any structure or routine but actually I really do.

“So I’ve been trying to keep the week and the weekend separate. I’ve been doing a little plan of the things I want to do or have to do through the week, even if it’s as boring as ‘skipping rope arrives’.

“I’ve been putting that in my diary so I know that’s on Wednesday. It’s probably why they invented days of the week in the olden days otherwise everyone would go mad!

“I’ve also been doing exercise, even if it’s just a little bit. Like today I just went out for a run for half an hour. I think it’s good to do that even if you don’t want to. My trick for exercising is do it immediately, don’t think about it or you’ll talk yourself out of it.

“I think it’s also a great time for finding out what you like in these times.

One thing the star counts as a “privilege” is seeing a therapist. He is aware that some people “don’t have the luxury,” but counts it as pivotal in looking after his own mental health.

Experiencing frequent and persistent anxiety is often a sign that you or someone close to you has an anxiety disorder. Often, anxiety disorders involve repeated episodes of sudden feelings of intense anxiety and fear or terror that reach a peak within minutes – panic attacks.

Like Nick has experienced in the past, panic attacks can interfere with daily activities, and lead to you avoiding places or situations.

The Mayo Clinic explains that common symptoms of anxiety include:

Specific types of anxiety disorder include agoraphobia, which is where individuals fear places or situations that may cause them to panic, and generalised anxiety disorder, which includes persistent and excessive anxiety and worry about activities or events.

It is recommended to seek medical help if you are experiencing any of the above symptoms, or if:

Samaritans are available to contact on 116 123 or email on [email protected] If you need more support, you can get free psychological therapies like cognitive behavioural therapy (CBT) on the NHS.