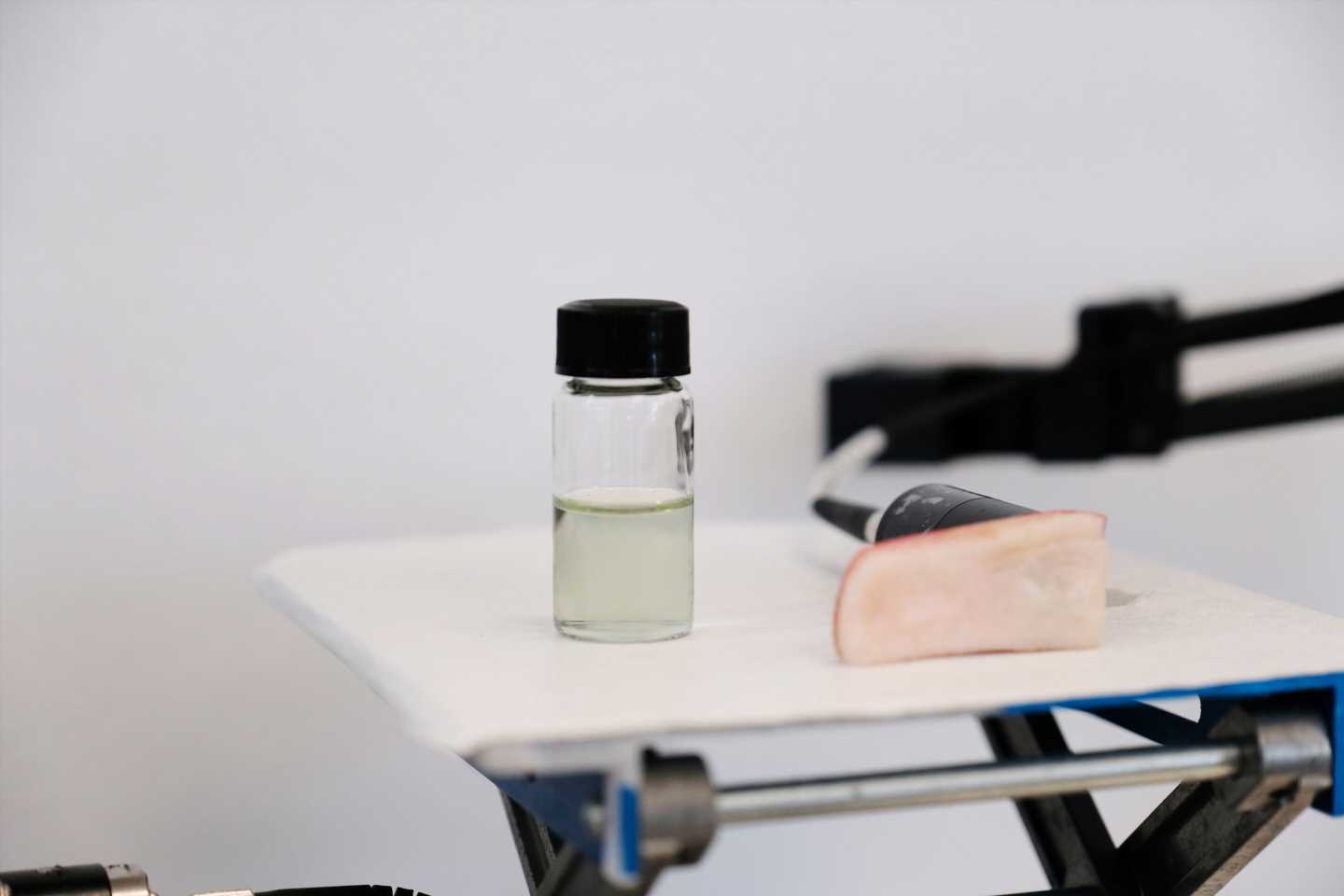 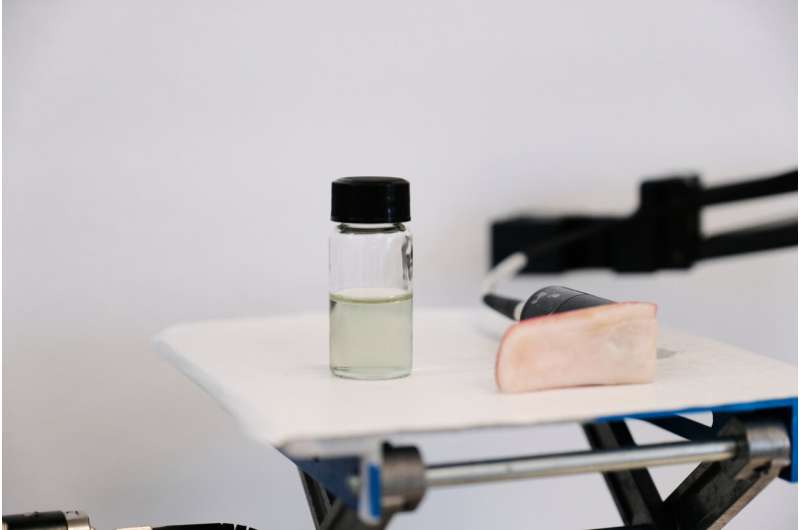 Scientists at Nanyang Technological University, Singapore (NTU Singapore) have developed a new therapeutic approach to obesity and related metabolic disorders that in laboratory experiments demonstrated a significant reduction in body fat, body weight, and improvement in the blood markers that accompany these disorders.

Developed by a team from NTU Singapore’s School of Chemical and Biomedical Engineering (SCBE), their method begins with an injection of a specially developed hydrogel using an insulin needle, into a fat deposit directly under the skin. A near infrared light is then shone on the site of the injection for five minutes a few times daily, over a few days, activating the hydrogel’s fat-burning ability.

Through laboratory experiments reported in ACS Nano in December 2021, the NTU scientists showed that mice on a high fat diet that went through this treatment were lighter in body mass after two weeks, as compared to obese mice in the group that did not receive the treatment.

The treated mice also had 40 percent less subcutaneous fat (directly under the skin) and 54 percent less visceral fat (wrapped around internal organs deep inside the body), and showed lower levels of cholesterol and insulin resistance, indicating the treatment’s potential to reduce the risk of metabolic disorders.

The scientists believe their innovation could one day become an alternative to costly fat reduction procedures that target only subcutaneous fat, and obesity drugs approved by the US Food and Drug Administration (FDA) that often come with side effects.

NTU SCBE Professor of Bioengineering Chen Peng, who led the study, explained: “All FDA-approved medications for obesity indirectly act on the brain to suppress appetite or on the digestive system to reduce fat absorption. Most of them have been withdrawn from the market due to their serious side effects. Procedures performed in clinics to remove fat in targeted areas have shown to be effective, but they come with risks and high cost, and do not improve body metabolism. In contrast, our therapeutic approach focuses on remodeling white fat tissue, which is the root of the evil.”

Prof Chen, who has a joint appointment at NTU’s Lee Kong Chian School of Medicine and is also affiliated with the Skin Research Institute of Singapore, added: “Through lab experiments, we found that this approach not only resulted in 40 to 54 percent fat reduction in obese mice, but also significantly improved their metabolism, which is key to reducing the risk of metabolic conditions such as heart disease, stroke and Type 2 diabetes. Though this method makes use of heat converted from near infrared light to burn subcutaneous fat, we found no thermal injury to the skin.”

Associate Professor Melvin Leow, Senior Consultant Endocrinologist at Tan Tock Seng Hospital,who was not involved in the study, said: “This paper describes very interesting advances in the armamentarium against obesity and insulin resistance, the precursor of diabetes. Importantly, though the work reported here was done on mice and on pig skin tissues, there is much optimism in terms of translation to human beings. Overall, I find this method holds great promise as the next generation of therapeutic agents to combat against obesity and type 2 diabetes.”

Based on these findings, the NTU team envisions that an obese patient at home could one day self-inject the therapeutics into belly fat at multiple sites using an insulin needle once a week. Subsequently, the patient can shine a hand-held laser at each injection site for five minutes one to three times daily for several days.

The NTU scientists have filed a patent for their innovation through NTUitive, the University’s innovation and enterprise company.

A three-pronged approach to burn fat

The key to this new therapeutic approach lies in its ability to activate TRPV1, a protein that detects heat and pain. When activated, this protein can trigger a process called browning: the conversion of white fat, which stores the extra calories we take in and leads to obesity in excess, to brown fat, a calorie-burning tissue that mitigates the harmful consequences of obesity but is scarce in adults.

At the same time, TRPV1 activation promotes lipolysis, in which fat droplets are broken down into fatty acids. Some of these fatty acids are used by the newly converted brown fat to burn calories; others enter the bloodstream and are broken down further in the liver and muscles.

TRPV1 activation also stimulates the secretion of adiponectin, a hormone that promotes glucose and lipid metabolism in the liver and muscles, and enhances insulin sensitivity, allowing the body to use glucose and fatty acids more efficiently.

The NTU scientists first developed a hydrogel that contains copper sulfide nanoparticles. When exposed to near infrared light, these nanoparticles convert light energy into heat to activate TRPV1. The NTU team showed in their study that the nanoparticles have negligible toxic effects on vital organs or tissues.

Also in the hydrogel is mirabegron, an FDA-approved drug for individuals with overactive bladders that the NTU scientists repurpose it to improve metabolic health by stimulating the browning of fat tissues.

To investigate the anti-obesity effects of their therapeutic approach, the NTU scientists put obese mice with signs of metabolic diseases through a two-week treatment regime. The hydrogel was first injected into subcutaneous fat, before near infrared light was shone on the injection site for five minutes for three days, followed by four days of rest. This was repeated for another week.

Over the two weeks, the body weight of obese mice without treatment went up by 9.5 percent. This is in contrast to the 5.5 percent dip in body weight of the mice that went through the treatment.

Prof Chen said: “Without the addition of the FDA-approved mirabegron in our injectable hydrogel, our therapeutic approach already showed outstanding fat reduction, with obese mice losing 27 percent subcutaneous fat and 44 percent visceral fat. But we found that adding the drug helped to suppress insulin resistance and bring down insulin to normal levels. This means that our approach could potentially also be used to treat other metabolic diseases associated with obesity, such as diabetes.”

The NTU team is now looking to collaborate with clinical partners to conduct clinical trials on human subjects to further test their therapeutic approach to tackle obesity.