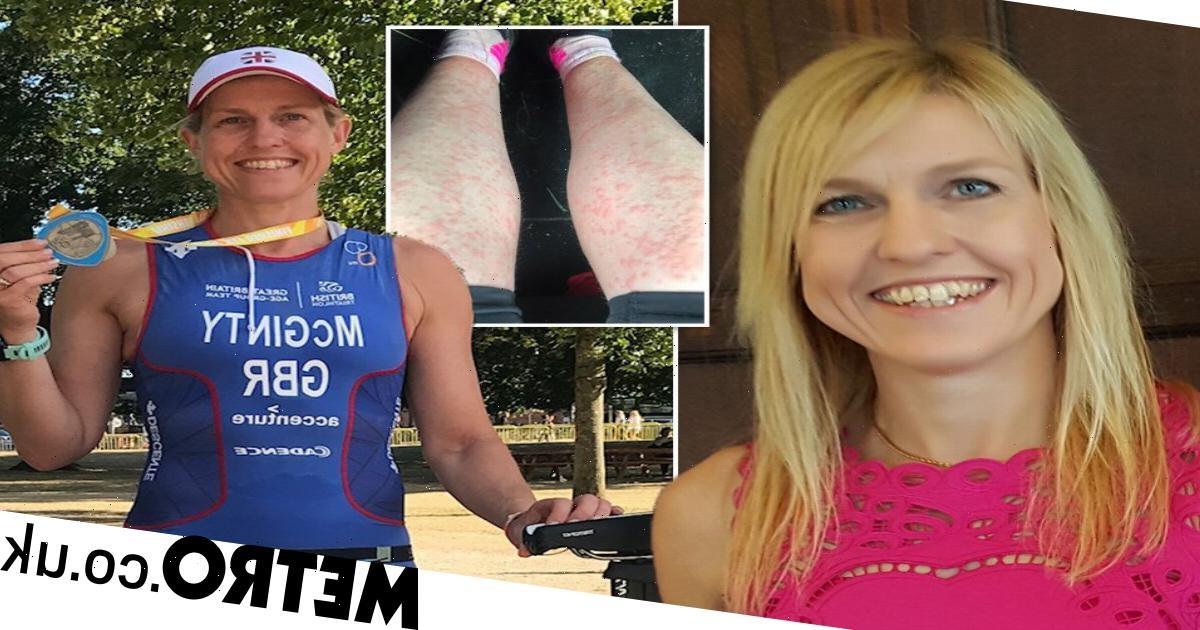 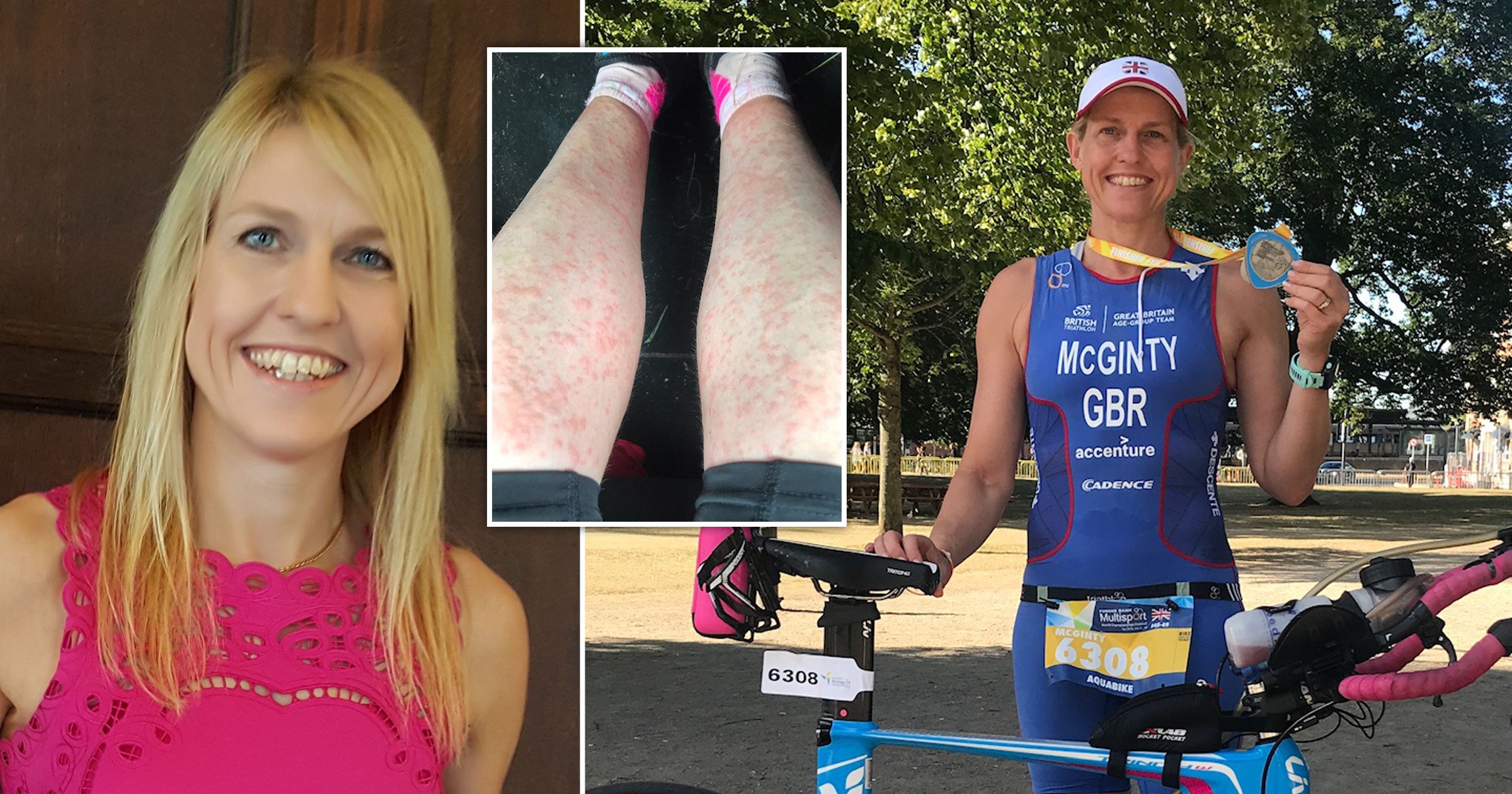 A nurse is gearing up to run 26.2 miles, cycle 112 miles and swim 2.4 miles in her 12th gruelling Ironman event – despite being allergic to exercise.

Roslyn ‘Roz’ McGinty discovered 12 years ago that she suffers from exercise-induced anaphylaxis (EIA).

Whenever the 50-year-old exercises, she suffers allergic reactions which include “extremely itchy and burning” rashes and facial swelling.

But the surgery nurse from Radlett, Hertfordshire loves triathlons too much to stop competing.

Roz says: ‘Every race is worrying, every exercise session is worrying, but the desire to do it outweighs the frightening thoughts.’

Luckily, Roz experiences early warning signs – known as prodromal signs – which indicate when a reaction might be about to happen.

She says: ‘I’m on high alert and take my antihistamines as my first course of action as soon as it happens and immediately stop exercising.’

She has also qualified for the Ironman World Championships which take place this October in Hawaii.

But the fitness fan has been forced to abort three races due to itchiness in her palms and groin – her allergy warning sign – and has used her EpiPen to stop an anaphylactic reaction.

Roz was diagnosed with EIA in July 2010, when she had an anaphylactic reaction while swimming in a lake during a training event.

Roz, who is married to 55-year-old radiographer Martin McGinty, remembers: ‘There was a lot of mucus pouring out of my nose, so that was really weird.

‘It wasn’t until I was out of the water and my adrenaline levels started to drop, that my lips felt swollen.

‘They were massive and my tongue was going wooden. I remember it getting worse and worse and I was worried my airways were going to swell too and make it hard to breathe.

‘It was pretty frightening.’

Luckily, Roz took some antihistamines she had in her car and, over half an hour later, her mouth swelling and dizziness abated.

Although Roz had previously noticed hives on her body after exercise, she had thought she might be reacting to something she had eaten, or that her skin was being irritated by sunscreen.

Roz says: ‘I never put it down to being allergic to exercise.

‘It wasn’t until that awful anaphylactic reaction, where I really thought that my airway was going to close, that I thought, “Wait a minute.”

‘The paramedics asked if it ever happened to me before and I said, “Actually I’ve had lots of reactions when I run.”

‘I jokingly said, “You can’t be allergic to exercise, can you?”‘

But the next day, Roz started Googling and figured out that an exercise allergy was exactly what she had.

The realisation was shocking as Roz loved to keep fit.

She had started running at the age of 29, quickly beginning to do half marathons, then running her first full marathon, the London Marathon, in 2008 when she was 36.

When running every day eventually took its toll and she suffered repeated tendon injuries, a physio suggested trying triathlons to mix up her daily sports schedule.

She was due to participate in her second Ironman event just two weeks after her anaphylactic shock in the lake.

She went to see an allergy specialist who told her she had the non-food dependent kind of EIA, which meant she couldn’t cut her chances of having a reaction by avoiding certain foods.

‘He basically told me, ‘I’m afraid your racing days are over’,” says Roz.

‘I wanted to cry. I had thought I could just take a tablet and be good to go.’

Roz was told antihistamines would mask the prodromal signs of an anaphylactic shock, making it dangerous because she might not know a reaction was coming.

But Roz was desperate to keep racing and, after discussing it with her husband, decided she would continue to race, but stop immediately if she had any warning signs.

Roz says: ‘I was issued with EpiPens and was advised on anaphylaxis and what to do if it happened.’

Over the years Roz became aware of the prodromal signs of a bad reaction.

She regularly comes home with a rash after exercise, but the danger signs that tell her to stop running, cycling or swimming immediately are itching in her groin and on the centre of her palms

Roz says, ‘When I feel that, I know I’ve got a few minutes to make sure to bring myself to safety.

‘I know that approximately ten minutes after stopping the reaction intensifies.’

To keep safe, Roz makes sure she exercises with other people, in a public park or on an indoor bike – so she is not isolated if she has an attack.

Roz’s husband worries about her racing but is supportive of her and trusts that she will stop as soon as the prodromal signs hit.

‘I live by the promise that I gave him and I’ve always stayed true to that,’ she says.

“We considered the risks and felt that it was a similar situation to someone who has anaphylaxis to bee and wasp stings.

‘Those people don’t avoid going outside, they are just vigilant and always prepared in case they are stung – my Epipens and antihistamines don’t leave my side when I am exercising.’

Two weeks after her first anaphylactic reaction, Roz took part as planned in an Ironman event in Copenhagen and made it to the end without any problems.

EIA does not strike every time Roz exercises, but she said the frequency of severe reactions is ‘unpredictable’.

“It can be as many as three to four a year, but I once went nearly a year without a severe one,” she added.

Before a race, she gives herself plenty of time to minimise stress and is wary of extreme heat, cold or humidity after being told those could be exacerbating factors.

‘There’s no time when I exercise when I don’t think about it… it’s on my mind constantly,’ she says

‘But I love what I do. I’ve achieved the goals I’d never have dreamt of.’

Roz is now preparing for the Ironman World Championships in Hawaii in four weeks’ time.

‘My dream was always to go to Hawaii to the World Championships.

‘I have nothing to prove to anybody. I just want to go and experience it.

‘If I get to that start line healthy and can go over the finish line healthy, I’m happy. Everything else is just a bonus.’