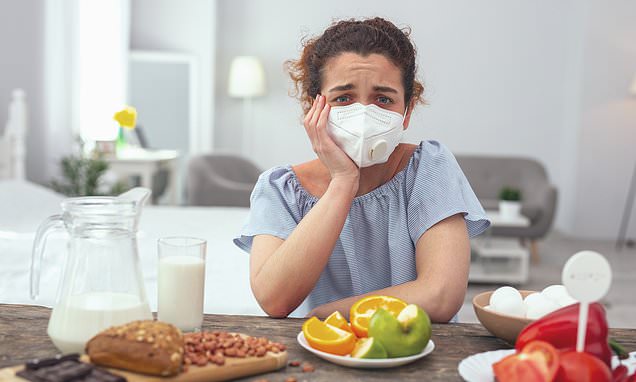 The great allergy myth: One in five say foods make them ill – but just one in ten suffer genuine reactions

Just over 10 percent of American adults have food allergies, but twice as many believe they do, a new study reveals.

True food allergies can be life-threatening and require sufferers to be very careful that their food has not come into contact with anything that might cause a reaction.

In recent years, the number of children with food allergies and intolerances has shot up, raising concerns that we raise kids in overly-sterile environments.

Researchers at the Ann & Robert H Lurie Children’s Hospital and Northwest University were surprised to find that more people are developing allergies in adulthood, too.

Yet, only half that claimed symptoms of food allergies had been diagnosed by a doctor and only a quarter carried a life-saving EpiPen. 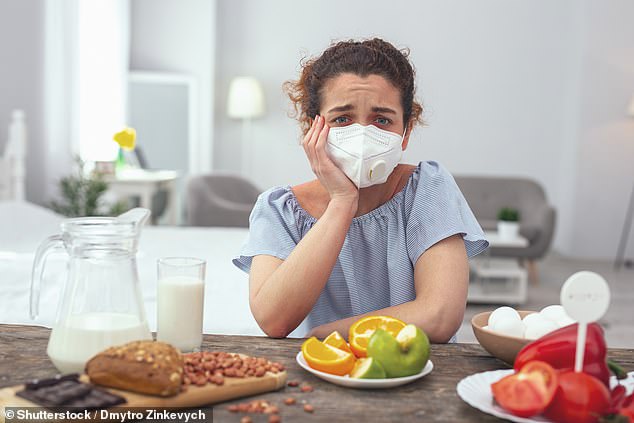 Twice as many American adults think they have food allergies as actually have them, new research reveals

Allergies are common, and often minor, yet about 200 people die from anaphylaxis after severe reactions to foods.

These sometimes violent reactions to foods are a form of disordered immune response that usually develops during childhood.

Essentially, the body misidentifies an unfamiliar food as a pathogen – such as foreign bacteria – and launches a misguided attack.

But the immune system’s attempts to flush a pathogen out take a toll on the body.

For some, the reaction involves unpleasant but relatively innocuous symptoms like a runny nose, coughing, sneezing or a rash.

However if multiple systems react severely to an allergen – often a food, pollen or materials like latex – this is called anaphylaxis, and sends the body into shock.

Most dangerously, blood pressure drops and airways can become constricted. epinephrine needs to be administered immediately in order to reverse this reaction.

However, the Northwestern University and Lurie Children’s Hospital researchers found that only about a quarter of people who actually had an allergy had a current epinephrine prescription.

‘An allergy can be life-threatening, so people need to know they have it and how to manage it,’ lead study author Dr Ruchi Gupta, a pediatrician at Lurie Children’s, told Daily Mail Online.

WHAT IS CELIAC DISEASE?

Celiac disease is a genetic autoimmune disorder in which gluten leads to damage in the small intestine.

Gluten provokes inflammation in the small intestine which affects the body’s ability to absorb nutrients from food.

The condition is estimated to affect one in 100 people worldwide.

One percent – or three million Americans – are living with celiac disease.

There are more than 200 symptoms of celiac disease but the more common ones are:

The only treatment for the disease and is a strict gluten-free diet.

Only foods and beverages with a gluten content less than 20 parts per million are allowed.

She and her team were surprised that so many adults had allergies. In fact, an even higher proportion of adults (10 percent) than children (eight percent) reported at least one food allergy.

And even more thought they had a food allergy.

‘So many adults are having some type of negative response to food and don’t know what to label or call it,’ Dr Gupta said.

But it’s important for these people to find out that they don’t in fact have an allergy, because ‘if their symptoms are consistent with an intolerance, that’s not necessarily life-threatening and some are treatable, whereas avoiding a food in your diet is so hard and challenging.’

In children and adults alike, both intolerances and allergies are on the rise – but scientists aren’t yet sure why.

About one in four of those that have a food allergy developed it in adulthood, the survey, published in JAMA Network Open found.

This pattern was more common among women, who are prone to developing allergies during pregnancy, but it seems to be on the rise among men, too.

‘We’ve been hearing about it, but we’re finally able to quantify it,’ said Dr Gupta.

The most common adult onset allergy was shellfish, which people tend to try later in life, and never become tolerant to.

The survey – answered by 40,000 people in the US – also asked participants what they thought might have triggered the adult onset of an allergy, though the responses have not yet been analyzed.

‘We ask if they got an infection that may have compromised their immune systems, hormonal changes, like pregnancy,’ among other possible triggers, said Dr Gupta.

‘But we need more mechanistic studies to see what causes this change.

‘Sometimes our research opens up more questions to look into and it’s important to understand what the triggers are to developing new allergies to foods you could once eat.’