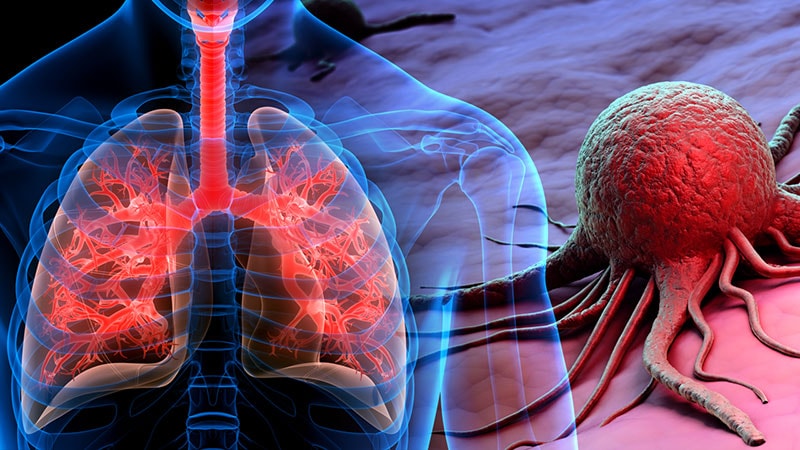 Nearly two thirds of patients with advanced non–small cell lung cancer (NSCLC) who are eligible for targeted therapy are not receiving these drugs because of gaps in clinical practice all along the cancer care spectrum, reveals a new analysis of data from US practices.

For some of these patients, it could mean missing the chance for long-term survival or even cure.

One lung cancer patient, Janet Freeman-Daily, recently tweeted that she entered a targeted therapy clinical trial 10 years ago and is still taking the same, now approved, oral drug, with “no evidence of disease.”

Patients who have lung cancer with mutations that can be targeted with drug therapies — but who do not receive them — are missing this opportunity.

The new study suggests that there are many such patients. The researchers analyzed data on more than 38,000 patients with actively managed advanced NSCLC. They found that about half did not receive biomarker test results for a variety of reasons. But even among the half who were successfully tested, 30% of these patients did not receive the appropriate targeted therapies.

Overall, around 64% of eligible patients with advanced NSCLC are not benefiting from the most appropriate therapies, the team concludes.

The research was published online on October 31 in JCO Precision Oncology.

“There’s various steps along the way that affect clinicians, laboratories, payers, the health providers [and] even patients,” he said. He added that product manufacturers also “have a role.”

“So it’s not an individual group that’s causing the problem. It’s a systemic awareness and systemic need to improve the delivery process.”

Pritchard underlined that the “the main goal of this analysis is to put everybody on alert that we need to do something about it.

“We need to ― and this is easy to say but hard to do ― evolve healthcare from a traditional one-size-fits-all mentality to a value-based strategy where you’re saying we want the best treatments” for patients, he said.

This means developing optimized and standardized laboratory processes, as well as clinical guidelines that set out the standard of care and optimized and integrated clinical decision support.

“We need to work as a community to demonstrate the value of this care and improve education and awareness to providers and payers,” Pritchard said. “That will encourage value-based practice coverage and reimbursement policies, and then also incentivize utilization in validated cases.”

Julie R. Brahmer, MD, who directs the thoracic oncology program at Sidney Kimmel Comprehensive Cancer Center at Johns Hopkins, Baltimore, Maryland, who was not involved with the study, said she was not sure whether she would say she was “surprised or disheartened” by the findings.

The study was focused on advanced NSCLC patients treated in 2019. Brahmer wondered whether the COVID-19 pandemic “might actually have made things worse.”

It will be important to “drill down” into some of the reasons why 30% of patients for whom biomarker testing results were available did not receive the appropriate treatment, she said.

Aside from cost-related problems, one factor at play could be whether the patient saw an oncologist, she said, while another could be that they went “straight to hospice” and were “not healthy enough to be able to tolerate” their targeted therapy.

Greater use of liquid biopsies, which identify biomarkers in the blood, are one way to improve access to biomarker testing, she suggested. It would help if these liquid biopsies were “consistently paid for by the payer, particularly for patients with advanced disease,” she added. Currently, payors often want patients to first undergo a tissue biopsy, which involves lung aspiration and may not be possible for some patients.

“If a Medicare patient is in the hospital when they have their biopsy or surgery, and then they have to wait 14 days in order for mutation tests to be ordered, and then if you add another 2 weeks for that test to come back, or even longer…. [These delays] are some of the reasons why patients didn’t end up receiving therapy,” she elaborated.

“Some of these patients just can’t last that long before starting treatment,” she said.

Sandip P. Patel, MD, an oncologist at the Precision Immunotherapy Clinic at the University of California, San Diego (UCSD), in La Jolla, wondered whether the issue is lack of education among physicians or whether there are potential financial problems. “Is there a financial risk to patients, for example, that is not being captured?” he mused.

It could also be a question of urban vs rural centers, language barriers in communicating to patients, or other social determinants of health, he added.

At his institution (UCSD), there are “multiple choices” of molecular tests, each with “little nuances that differ among the tests that folks sometimes will take a look at in term of picking the best.

“But the best test is the one that gets done, and here we’re seeing no testing at all” for many patients, he said.

“It’s really unfortunate, because for a lot of these patients, not only are they not getting the latest therapy, but they’re often getting something else that’s expensive and toxic instead,” Patel said.

Referring to the relatively high proportion of patients who didn’t receive targeted therapy even after being tested, he said, “For me, this study leaves more questions and answers.

“We’ve seen a lot of work in this space, showing us the problem,” Patel said. “What I haven’t yet seen is a very discrete analysis of the cause of that problem upstream.”

In their article, Pritchard and colleagues note that more than 90 targeted therapies have been approved by the US Food and Drug Administration for use in eligible cancer patients. An estimated 55% of recent oncology trials involved the use of biomarkers.

Predictive biomarker testing to identify patients who may benefit from targeted therapies “is a cornerstone of personalized medicine in cancer care, allowing for more rapid diagnosis while informing treatment decisions that could lead to better patient outcomes and systemic efficiencies,” they emphasize.

However, providers “face several challenges” when integrating biomarker testing and targeted therapeutics into cancer care, and the use of biomarker testing varies widely across tumor types, biomarkers, and practice settings.

For their study, the team examined the use of targeted therapy in advanced NSCLC using data from the Diaceutics Data Repository, which includes commercial and Medicare claims, as well as laboratory data.

The team examined the impact of seven clinical practice gaps on the timeline from ordering a biopsy to delivering targeted treatment. They then normalized the results to a standard patient population of 1000.

In 6.6% of cases, an initial tissue or liquid biopsy was never performed, meaning that 66 of the 1000 patients could not progress toward targeted therapy.

For the third clinical practice gap, the tumor cell content was overestimated in 1.7% of patients. As a result, their biopsy specimen could not be tested because it did not meet the threshold requirements. This resulted in the loss of a further 14 patients.

Moreover, for a further 17.5% of patients, biomarker testing was not ordered at all, owing to cost concerns, a lack of access to testing, a lack of awareness of testing options, and low confidence in the results, among other reasons. An additional 0.6% began treatment before any testing was ordered; together, that accounted for 142 patients being lost.

Even among patients who underwent biomarker testing, 14.5% had uninformative or inconclusive results, and 3.9% had false negative results, meaning that a further 118 patients were lost.

In another 4.0% of cases, the results of biomarker testing did not arrive within the treatment decision window, owing to delays in reporting the results, and so for these patients, treatment began without the results being taken into consideration. A further 21 patients were lost.

The final clinical practice gap was not choosing the appropriate targeted treatment on the basis of test results. The researchers found that of 27,186 patients who underwent biomarker testing and received a timely result, 29.2% were not given the corresponding therapy. This resulted in the loss of a further 147 of the original 1000 patients.

Overall, the team calculated that 64.4% of patients newly diagnosed with advanced NSCLC “are not benefiting from precision oncology care options appropriate for their diseases and will likely have suboptimal outcomes.”