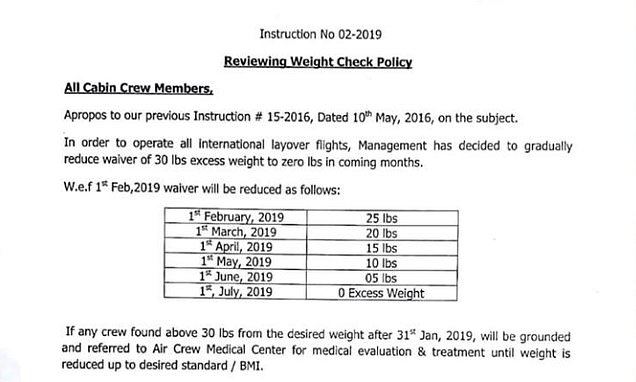 Lose weight, or lose your job: Pakistan International Airlines ‘tells overweight cabin crew they need to shed up to 30lbs by July or face being grounded’

A Pakistan airline has allegedly told their obese cabin crew to lose weight or risk losing their jobs.

A memo was sent out to 1,800 employees by managers warning that their weight would be measured in upcoming months.

The flight attendants will be given ‘ground’ duties if they do not hit targets within one month, the letter said. 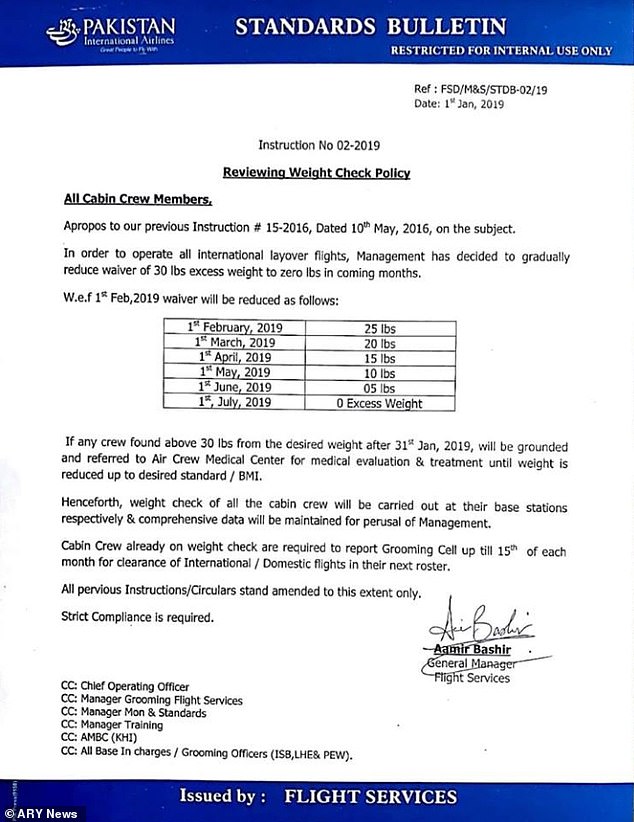 Pakistan International Airlines has told its cabin crew to lose weight or lose their jobs, a leaked memo has revealed

The leaked memo, obtained by ARY News, revealed bosses said they have decided to ‘gradually reduce waiver of 30 lbs excess weight to zero lbs in upcoming months for the cabin crew’.

It reads: ‘If any crew found above 30lbs from the desired weight after January 31, 2019, will be grounded and referred to Aircrew Medical Centre for medical evaluation and treatment until weight is reduced up to desired standard/BMI.’

The staff then have until July 1 to shift the full weight, the memo said.

It is not clear what the ‘desired weight’ is, but a spokesperson said the memo was to remind staff they need to be ‘slim’, as well as ‘smart and fit’.

Body mass index (BMI) is a measure of body fat based on your weight in relation to your height.

The NHS guidelines are as follows:

Mashhood Tajwar, a spokesperson for PIA, confirmed that the memo was real, and furthermore, that is was a ‘regular, routine matter’, according to CNN.

He said that the initiative was to improve both the appearance and health of the staff, and insisted that PIA was not the only airline to be making such demands.

‘No one would like to have shabby crew in the aircraft,’ he said.

According to him, the airline had received complaints about ‘obese’ flight attendants.

The letter would require around 100 people, or five per cent, of the total employers to drop the pounds, according to Mr Tajwar.

Crew working for PIA are issued a suggested weight chart. It tells employees that women who are 5ft 7in tall they should weigh between 133-147lbs (60-67kg).

In 2015, a similar scenario occurred in neighbouring country, India, when a shocking 130 cabin crew were taken off flights.

Air India told 600 of its 3,500 cabin crew to lose weight within six months in 2014, or risk being taken off flights and given a job on the ground.

Following this, 130 cabin crew were removed from duty because their body mass index (BMI) was too high.

But by the airlines standard, a women’s ‘obese’ value was above 27. An obese BMI is usually defined as 30 or more.

‘People who are fitter can respond quicker and more efficiently in case of any untoward situation’, a spokesperson told The Telegraph in Calcutta in 2015.

In a 2014 BBC documentary ‘A Very British Airline’, it was revealed that the British Airways cabin crew are ‘required to look immaculate at all times’.

If lipstick is not applied at all times, or a hair out of place, staff could face detrimental consequences.