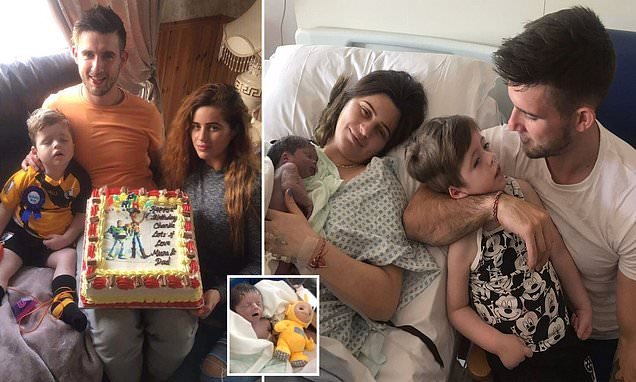 ‘Noah broke our heart into bits, and Charlie took away whatever was left’: Parents’ heartbreak after their two sons die within the space of a month because of the crippling brain condition they were both born with

Two brothers born with the same brain disorder died within a month of one another – one aged three and the other just six hours old.

Charlie and Sharon Corcoran, a couple in their 20s from Neasden in London, lost both their sons just 24 days apart last summer.

Charlie, three, and Noah, a newborn, both had polymicrogyria, a condition in which the brain does not develop properly in the womb.

Mr Corcoran said he feels like he’s ‘staggering through life’ after the devastating loss and the couple don’t know if any future children would have the same condition. 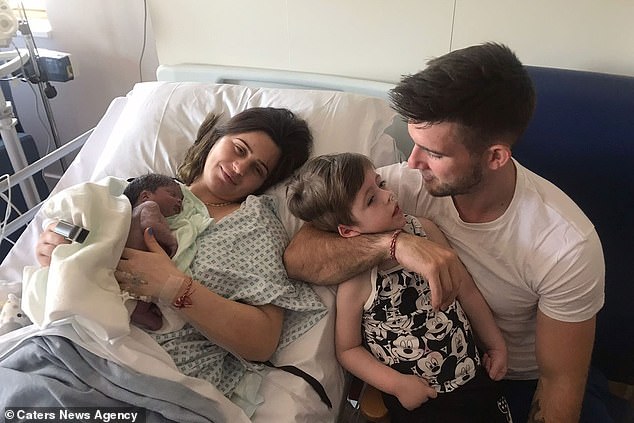 Sharon and Charlie Corcoran lost both their sons – Noah, a newborn, and Charlie, three – within a month of each other in June and July last year. Pictured, the family together during the hours before Noah died

Noah died hours after he was born by caesarean section on June 11 last year, after doctors discovered her had both polymicrogyria and an underdeveloped heart.

And the couple’s sorrow deepened just three weeks later when, on July 4, their other son, Charlie, also died after living with the brain condition.

‘Noah broke our heart into bits and Charlie took away whatever was left,’ said Mr Corcoran, a 29-year-old lorry driver originally from County Tyrone in Northern Ireland.

‘Ever since, we have been existing rather than living, we’re empty and feel like different people, we’re just trying to get through each day.

‘I feel like I’m staggering through life. The hardest thing is not having our boys and having to try to live without them.’

Both Charlie and Noah were born with polymicrogyria, a genetic condition in which the folded structure of the brain forms incorrectly.

The condition can be caused by a number of genetic defects, but Mr and Mrs Corcoran haven’t been told which of them carries the gene which triggered it.

Mrs Corcoran, 23, said: ‘We’ll never be the same again. Whenever I think “I don’t’ want to be here” I think I need to fight for them.

‘It’s very lonely, there are reminders of the boys everywhere. Having kids again is a difficult prospect to think of.’ 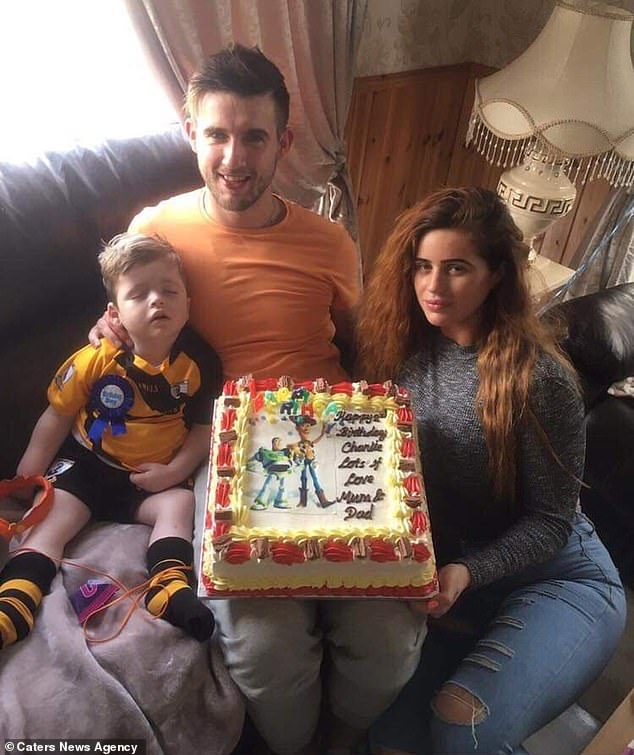 Mr and Mrs Corcoran have been tested to find out which of them carries a gene which may have triggered their sons’ brain condition, but haven’t been given useful results 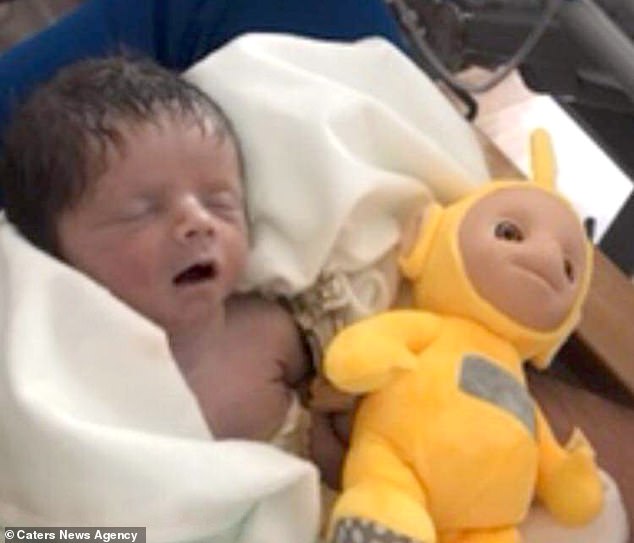 Noah, who died when he was six hours old (pictured as a newborn), had the brain condition polymicrogyria and an underdeveloped heart

Polymicrogyria is a genetic disorder which causes the brain to develop incorrectly.

It makes the brain develop an abnormally high number of folds and they grow closer together than usual.

This can interrupt nerve signals and cause various problems with the mind and body.

In milder cases the condition can lead to controllable seizures, whereas more serious cases can trigger dangerous seizures, epilepsy, intellectual disability, and weakness or paralysis.

Polymicrogyria can kill patients by triggering fatal seizures or causing muscle problems which lead to lung infections and breathing difficulties.

Experts don’t know how common the condition is because it has so many potential causes which may be recorded differently.

The condition is thought to be triggered by various genetic disorders including Adams-Oliver syndrome and Aicardi syndrome.

Source: US National Library of Medicine

The structural changes polymicrogyria causes in the brain interfere with nerves abilities to communicate and transmit signals properly.

More severe cases of the incurable condition can cause epilepsy, delayed development, speech and swallowing problems, and weakness or paralysis.

Polymicrogyria can kill patients by triggering fatal seizures or causing muscle problems which lead to lung infections and breathing difficulties.

Doctors told the couple Noah would most likely not survive the birth and, despite making it through that, he died six hours after he was born.

The devastated couple returned home to be with Charlie but he, too, died two days after his third birthday a few weeks later.

Mr Corcoran said: ‘Sharon had to give birth knowing that Noah wouldn’t make it.

‘Our family brought Charlie in and for six hours we were able to be a family together.

‘It was really difficult, as the hours went on we got more and hopeful he’d survive. I’ve never cried so much before, it was difficult to keep it up.

‘When Noah passed away I held him and he cried out in the final moments before he died.

‘Right before he passed away I put him on Sharon’s chest and he opened his eyes and looked at Sharon. There wasn’t a dry eye in the room. 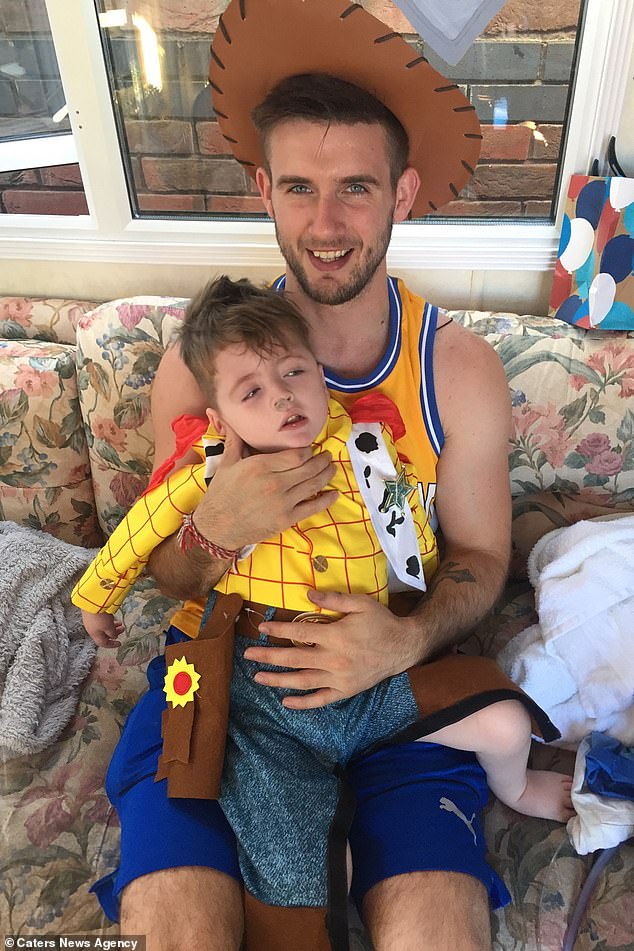 Charlie, who was three when he died, was also born with polymicrogyria – a condition in which the folds of the brain do not develop properly 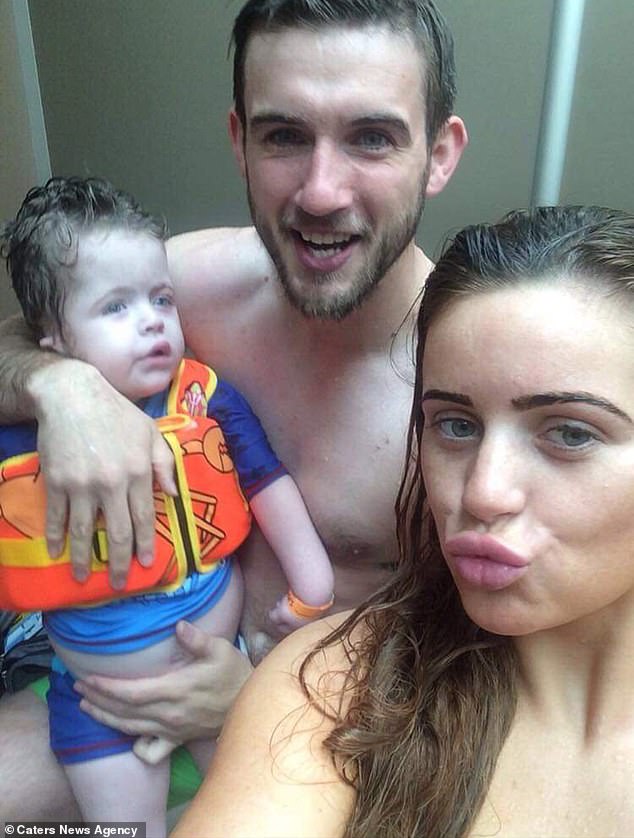 Charlie, pictured with his parents, needed round-the-clock care and medication for his entire life as a result of his condition, and had regular seizures

‘Every time I tried to walk away I couldn’t – it was just too heartbreaking.’

Mr and Mrs Corcoran have since been tested in a bid to find out which one of them carries the gene which caused their son’s genetic disorders.

The condition could be caused by a gene carried by one or both of them – but the tests haven’t given them any conclusive results.

This means they don’t know if they will ever be able to have children without passing on the disease.

Charlie had frequent seizures and required full-time care and medication throughout his short life, and had seven stays in intensive care.

‘We were always told Charlie wouldn’t be able to live a normal life or walk or talk,’ said Mr Corcoran.

‘But he brought so much to our life, he had so much character about him and had a spark that could light up a room.

‘Two days after his birthday we went back into the hospital because his breathing had become a struggle.

‘We knew deep down it was going to be his final time. We spent two days in hospital holding him and playing music to him. 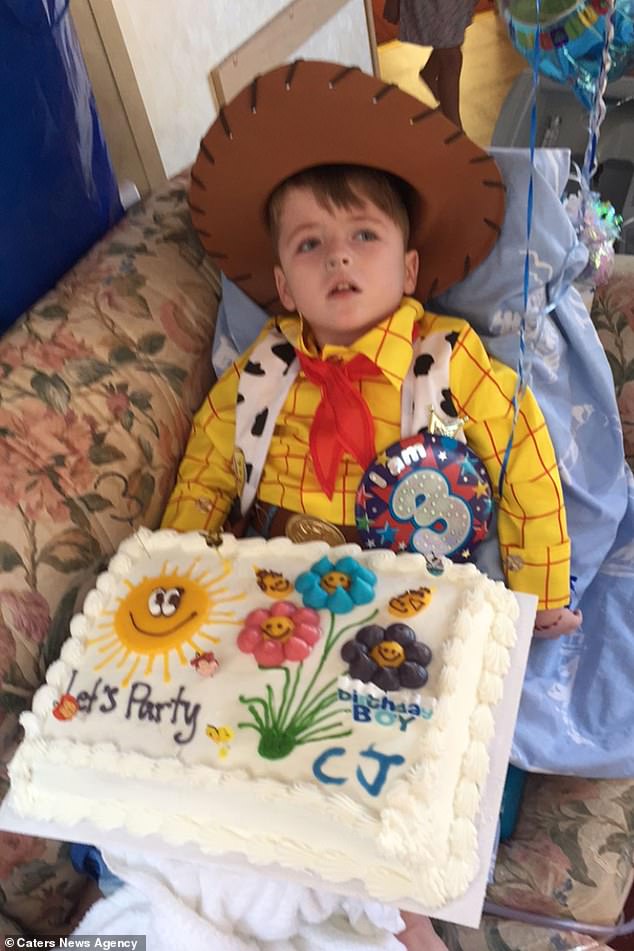 Charlie died just two days after his third birthday. His parents took him to hospital when they noticed he was having breathing problems and his father, Charlie, said: ‘We knew deep down it was going to be his final time’ 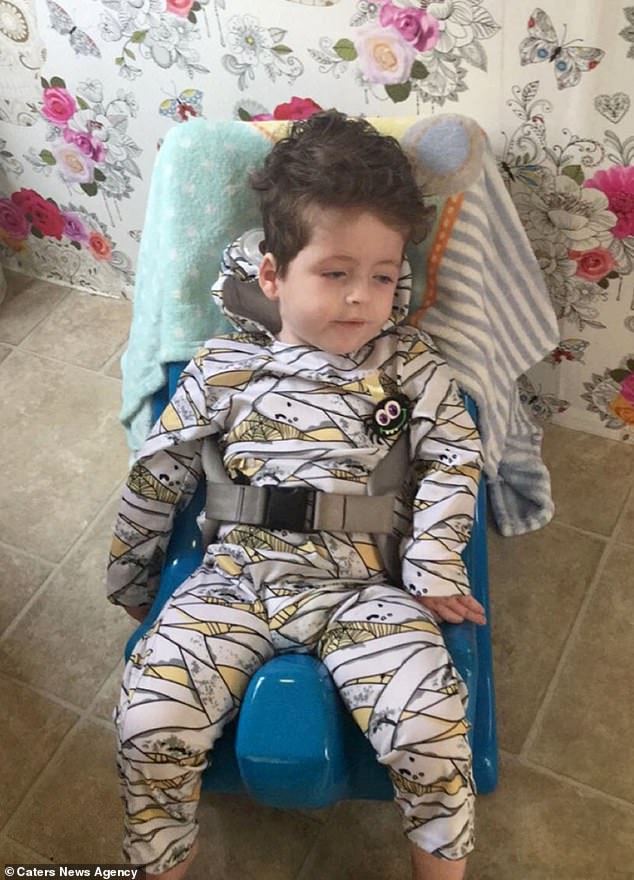 Charlie, who was diagnosed when he was a few weeks old, was never expected to learn to walk or talk. But Mr Corcoran said: ‘He brought so much to our life, he had so much character about him and had a spark that could light up a room’ 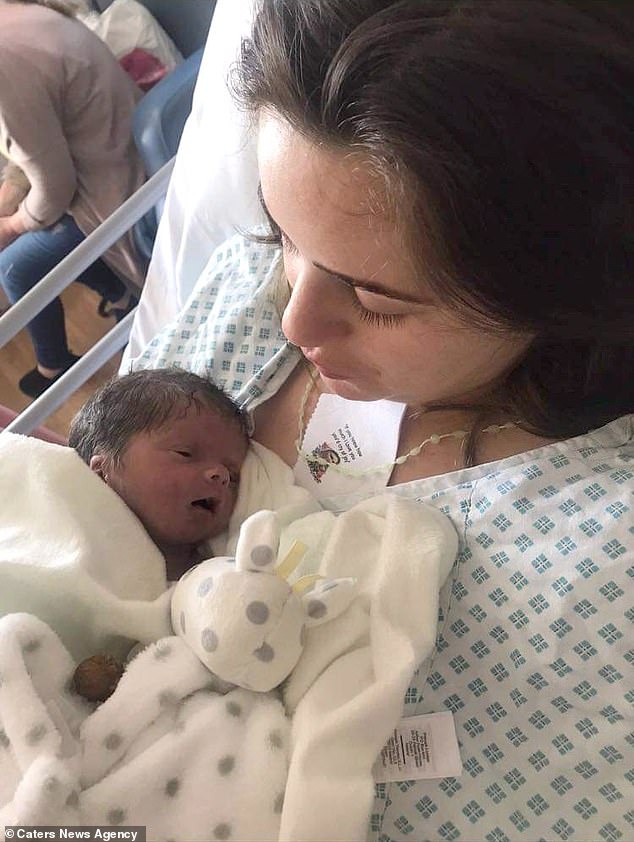 Noah was delivered by caesarean section on June 11 2018. Doctors didn’t expect him to survive the birth – he did but he died just six hours later 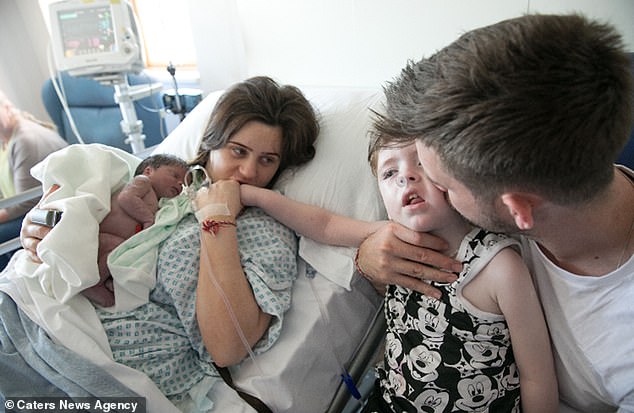 The Corcoran family were able to be together for the first and last time for a few hours after Noah was born. Mr Corcoran said: ‘It was a fleeting moment but it’s always something we can look back on’

‘On July 4 we knew how bad he was getting and we rang all our family and friends and told them we weren’t sure if he had much longer left.’

The couple are now trying to raise money for the Northwick Park Hospital in London, which Charlie had to visit regularly.

They already have more than £2,300 out of a £3,000 target which they hope to contribute towards specialist machines to help sick children breathe normally.

Mr Corcoran added: ‘I was holding Charlie in those final moments. I was telling him it was OK to go, we didn’t want him to suffer anymore and that he could go and be with Noah.

‘Right before he passed away he made two sounds like he was trying to say something, and then he took his final breath.

‘We knew he was gone, we were in bits. The final photos of us in the hospital room show us together as a real and proper family.

‘It was a fleeting moment but it’s always something we can look back on.’

To donate to their fundraiser visit the GoFundMe page.