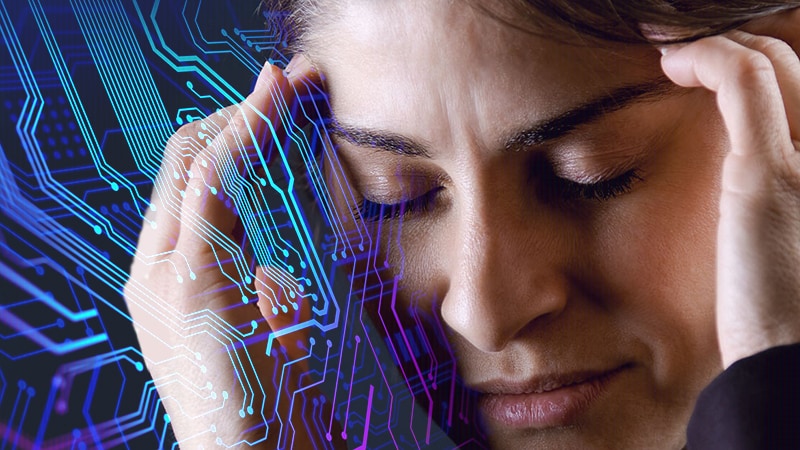 Most people avoid smartphones when they have a migraine headache, but a non-invasive treatment for episodic migraines may change that.

A smartphone-enabled device, cleared by the US Food and Drug Administration in early 2021, uses technology to trick the brain into releasing the neurotransmitters serotonin and noradrenaline that can help ease migraine pain.

Tina Montgomery, 58, has suffered migraines since childhood and spent years looking for something to help manage them. Doctors consider her a “chronic” sufferer in that she has more than 14 migraines a month (fewer than 14 is considered “episodic”). Prescription antidepressants, anticonvulsants, and Botox shots as preventive treatments helped a little but not enough.

A few years ago, she found some relief using a new preventive injectable medication that targets a peptide known as CGRP, combined with an oral CGRP rescue medication, ubrogepant (Ubrelvy). However, by early 2021 Montgomery’s chronic migraines were back as she faced stress from the pandemic and her role as a caregiver for her aging parents.

“I was going through so much medication. I just didn’t feel good taking so much,” she said.

Looking for relief, she read about Nerivio, a wearable migraine treatment device that uses remote electrical neuromodulation (REN). She mentioned the device to her neurologist, and he agreed she might benefit from trying it out. Today, she uses the device whenever she feels a migraine may be imminent, she says.

“It really helps me stave off migraines I feel coming on and the milder ones where I would normally hesitate to use prescription medication because [insurance] limits the number of pills they give you in a month,” she says. “I follow through with the Nerivio treatment and usually find that my migraine doesn’t fully develop or is completely gone, and I don’t get a migraine at all.”

Taking It on the Arm

The device works by stimulating nerves at the back of the arm right around the triceps. “Those nerve fibers relay information to the brain stem [so it can] work its magic and use the brain’s own natural mechanisms for reducing pain,” says Brian M. Grosberg, MD, director of the Hartford Healthcare Ayer Neuroscience Institute Headache Center, West Hartford, Connecticut.

These mechanisms are like a bait-and-switch for the brain, says Britany Klenofsky, MD, assistant professor of neurology, Icahn School of Medicine at Mount Sinai, New York City. “You’re trying to stimulate pain somewhere else [on the body] to tell the brain to protect itself and release [the neurotransmitter] serotonin,” she says. “You do this by putting the device on your arm, an area that’s away from the head where the pain is actively occurring, turning the device on, and increasing the stimulation to a nearly painful stimulus.”

This pseudo pain prompts the brain to release serotonin, the feel-good hormone along with norepinephrine and noradrenaline. The device works best when it’s used as soon as a migraine starts, so patients should hook up Nerivio within the first 20 to 30 minutes of onset of pain, says Grosberg, who was an investigator on the double-blind treatment study that led to FDA clearance. If patients wait too long, the device may not work.

This is why, as soon as Montgomery feels a migraine aura (there are six types of migraine auras, including visual changes and muscle weakness) that occurs right before a migraine strikes, she puts the device armband on her upper arm and launches its smartphone app. Then she turns on the device for a 45-minute treatment, which begins with what she characterizes as tingling and vibration sensations on her arm. She turns up the intensity of the sensations, which are mild electric currents, until they are well-felt but not painful.

Montgomery said she can use the device and multitask since there’s no need for her to lie down or sit in a darkened room. And since it is worn on the arm, she can wear it under a shirtsleeve while working or out in public without anyone noticing. She also uses the app’s migraine diary and guided meditation to help reduce the anxiety that often accompanies her migraines.

The device is currently approved for adolescents and adults and can be used for both episodic and chronic migraines. From an efficacy standpoint, the device provides relief about as well as a commonly used pharmaceutical class of drugs, triptans. About 37% of people with episodic migraine achieved complete freedom from pain 2 hours after their treatment. In addition, about two thirds of people reported pain relief after 2 hours, which is better success than people find with many prescription and nonprescription drugs.

A separate study also looked at acute treatment for chronic migraine sufferers and found nearly 60% of people using the device found relief and 21% said they were pain-free after 2 hours. Almost two thirds of those who experienced pain relief were pain-free 24 hours after the treatment.

There are other FDA-cleared non-invasive devices to treat migraines. One device, CEFALY, is an external trigeminal nerve stimulation device that sits on the forehead. Another device, SpringTMS, uses transcranial magnetic stimulation on the back of the head. A third option, the gammaCore Sapphire, is placed on the neck to stimulate the vagus nerve. All three have been cleared by the FDA to work as preventive and acute treatments for migraine.

Theranica, the company that developed Nerivio, is trying to boost use of the device by allowing patients to get a prescription via telehealth visits with a physician.

The company, as well as the companies behind the other neuromodulation devices, are marketing their treatments to children ages 12 and up since nonpharmacologic options are often preferable for parents, said Thomas Berk, MD, a clinical associate professor in the Division of Headache at NYU Langone Health in New York City.

Berk also says the devices could be appealing for those people who don’t want or can’t take medication, such as pregnant women or those who don’t respond well to drugs. “[They] could also be used by somebody who needs something in addition to a medication,” he says.

For now, people like Montgomery say they are happy to have another tool in their migraine arsenal. “Overall, I’m taking less medication because I haven’t had to have my Ubrelvy refilled as often as I used to,” she says. “It’s really helped me manage changes and stresses in my life.”

Karen J. Bannan is a freelance writer and editor who lives in New York. Her work has appeared in a variety of publications including The New York Times, Parents, Science News, Redbook, AARP, Reuters, and The Wall Street Journal.