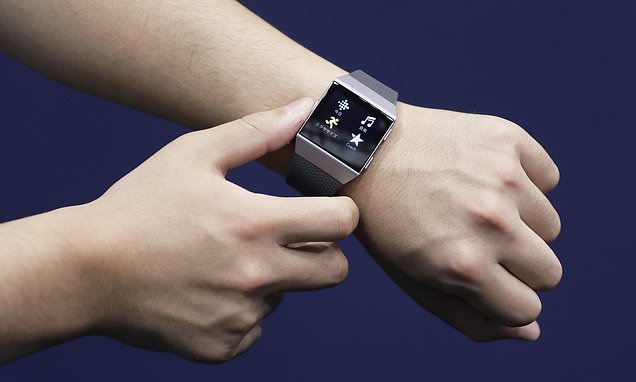 Cancer patients could one day be given Fitbits to boost their chances of surviving, according to scientists.

Using devices to track how much exercise patients are doing may be the future of treating the disease, which research has shown is less deadly for fitter people.

Exercising more may even be better at treating cancer than some drugs and one day replace prescriptions, researchers claim.

And they added patients with high step counts – which can be easier to achieve if tracked and measured against a goal – may be a third less likely to die early than those who don’t walk much. 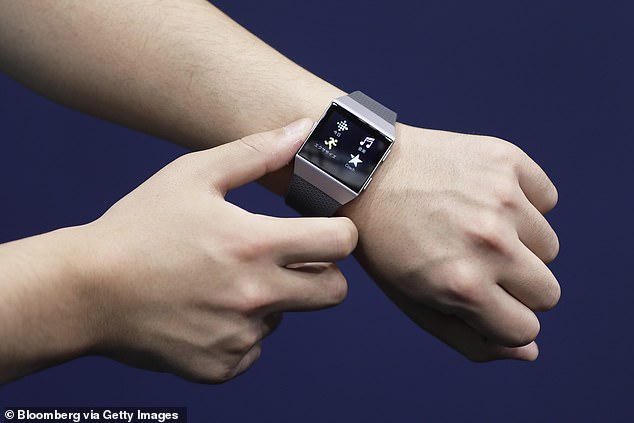 Fitbits, which use electronic sensors to track how many steps someone does and what their heart rate is throughout the day, could be used by doctors to create an accurate and reliable picture of how much exercise patients are doing, scientists say (Pictured: The Fitbit Ionic)

Scientists revealed the promising research at the annual conference of the American Society of Clinical Oncology in Chicago.

‘We have data showing that a higher number of steps is associated with better outcomes in cancer,’ said Dr Andrew Hendifar, from Cedars-Sinai Medical Center i Los Angeles, according to The Sun.

‘But there are very few cancer interventions aimed at improving patient activity levels. Now we have a tool.’

Fitbits are electronic devices worn like a watch which use sensors to track a person’s movement and count their steps, and measure their pulse.

Researchers said exercise is already known to improve cancer patients’ survival odds, but it’s difficult to get an accurate picture of how active they are.

People often cannot be relied on to be truthful about how much exercise they do, so having a gadget collecting concrete data could overcome this problem.

And patients may be more likely to do more exercise if they can track their progress against a target.

There are at least 70 clinical trials happening now to examine how wearable electronics may affect cancer outcomes, the scientists said.

One study by the Institute of Cancer Research in London found an extra 1,000 steps per day was linked to a one-third lower chance of an early death.

And another by US researchers found that, among cancer patients with an average daily step count of 3,700, an extra 1,000 per day could make them twice as likely to be alive after six months.

Dr Hendifar added: ‘I think what we will end up with is physicians being able to say to patients, so here is a Fitbit, and the first thing you could do to improve your chances is to increase your step count.

‘It may be that we are able to say to patients – getting your step count from an average of 4,000 steps a day to say 6,000 or 8,000 steps could be more useful than being prescribed medication.’

Professor Johann de Bono, from the Institute of Cancer Research, also named Fitbit as a device which could help treat cancer patients.

He said: ‘This can help doctors know how well they will be able to cope with treatments,’ The Telegraph reported.

‘It can also give us an idea how long they have to live. Simply put, if you are less fit you are less likely to do well and die quickly.

‘But it also encourages patients to look at their step count and be more fit and active, which can help them get better.’

Exercise has been shown by research to be useful in both preventing cancer and improving survival if it does develop.

Working out can reduce the levels of hormones which contribute to the growth of breast cancer, according to Cancer Research UK.

Oestrogen and insulin can both increase how much cells divide – uncontrolled division is what causes tumours to grow.

Exercise can reduce the amounts of both oestrogen and insulin in the body, reducing the risk of uncontrolled growth beginning.

Being active can also speed up digestion and the movement of food in the body, which reduces the amount of time potentially harmful chemicals are left in the digestive system, reducing the risk of bowel cancer.

Research has also shown people who exercise more are more likely to survive.

A study on 5,807 patients at Roswell Park Comprehensive Cancer Center found people with cancer who exercised regularly before and during their illness were up to 40 per cent more likely to pull through.

And people who were inactive before but started exercising after their diagnosis saw a 25 to 28 per cent improvement in survival, the researchers said.