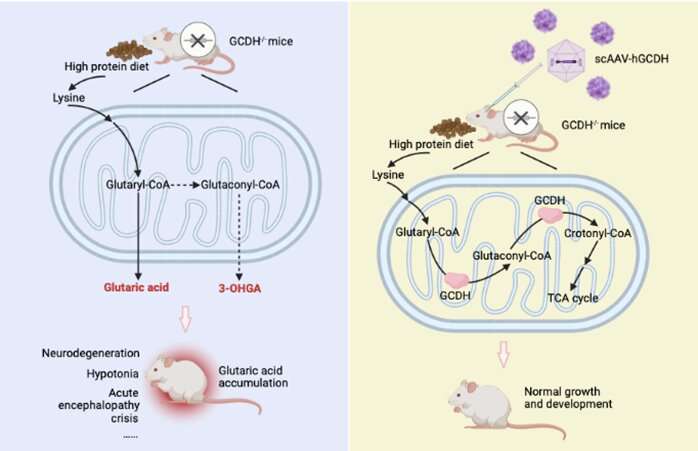 Glutaric aciduria type I (GA-I) is an inherited disease caused by a mutation of the glutaryl-CoA dehydrogenase (GCDH) gene. The global incidence of GA-I is estimated to be 1/100,000, with around 75,000 cases worldwide.

Patients suffering from this condition struggle to digest protein. This results in an accumulation of excess glutaric acid, which damages the central nervous system (CNS). Symptoms usually appear when patients are still babies and include an unusually large head, decreased muscle tone and acute malfunction of the brain. There is no available cure, and, without proper treatment, life expectancy is just 2-3 years. With treatment, such as diet control, carnitine supplements and medical care for acute attacks, some disease progression can be managed.

Lu Guo, a Ph.D. candidate at the Institute of Zoology, Chinese Academy of Sciences, embarked on a study with her co-authors to explore the potential of adeno-associated virus (AAV) to treat GA-I patients. Their results have now been published in Fundamental Research.

The research team chose to go the AAV route as it has proven to be an effective treatment for a variety of genetic disorders. Guo says, “The benefit of AAV is that it can be delivered to a specific tissue or organ. While the GCDH gene is highly expressed in GA-I patients’ livers and kidneys, the main area of the body affected by the disease is the CNS. That meant we had to decide where to deliver the AAV.”

For that aspect of the project, the team turned to the Egyptian Fruit Bat for inspiration, as Guo explains. “The bat is specifically deficient in GCDH in its liver and kidneys. But while it presents high levels of glutaric acid in its peripheral organs, the levels in its central nervous system are normal and the bat lives a healthy life. This led us to believe that delivering AAV to the CNS should be our priority.”

Corresponding author, Wei Li, adds, “The next step is to move this forward to become a marketed drug and an investigator-initiated clinical trial is already underway. Meanwhile, we are so pleased that this project has received a Rare Pediatric Disease Designation (RPDD) from the Food and Drug Administration (FDA).”