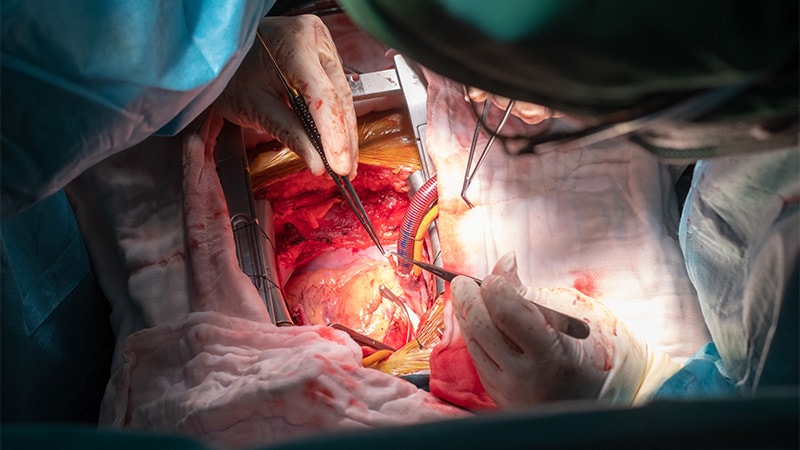 Randomized comparisons of percutaneous coronary intervention (PCI) and coronary bypass surgery (CABG) for left-main coronary disease, including those that have sparked very public debate, naturally enrolled patients suitable for either procedure. But that takes a toll on their relevance to clinical practice, where patients are not so narrowly defined.

It also highlights the role of patient registries in guiding real-world decisions, despite their own limitations. So, when researchers from a respected national patient registry recently reported a significant 59% jump in all-cause mortality for PCI compared with CABG in left-main disease, it probably more reflected the complexities of the overwhelming majority of patients who are treated outside of clinical trials than relative efficacy of either treatment.

The group’s analysis, based on more than 10,000 patients in the Swedish Coronary Angiography and Angioplasty Registry (SCAAR) who underwent revascularization for left-main disease over the last 7 years, also identified a subgroup for which PCI appeared better for survival.

“The benefit of CABG was highest in younger patients with longer life expectancy, and PCI was associated with lower mortality in patients over [age] 80 years,” who made up about 30% of the cohort, said Elmir Omerovic, MD, PhD, Sahlgrenska University Hospital, Gothenburg, Sweden, when presenting the analysis September 19 at Transcatheter Cardiovascular Therapeutics (TCT) 2022, held in Boston.

The SCAAR investigators had knowingly thrown themselves into an ongoing and sometimes fiery debate on the relative merits of PCI and CABG for left-main disease and, more dramatically, on alleged improprieties in how one of the issue’s key trials, EXCEL, was analyzed and reported.

There were no surgeons among the moderators or panelists attending Omerovic’s presentation.

He acknowledged the analysis was almost, by definition, purely observational and had potential for selection bias and residual confounding. Although it controlled for some differences between the 5391 patients treated with PCI and the 4863 who underwent CABG, the groups had sharp baseline differences.

Those getting PCI in some ways were sicker; they had significantly more renal dysfunction, higher Killip class, and greater history of prior myocardial infarction, PCI, and CABG. But they were less likely to have multivessel disease. Still, the study’s multivariate analysis adjusted for such differences.

“Real-world studies have a role, and randomized, tightly controlled clinical trials have a role,” Eric A. Cohen, MD, Sunnybrook Health Sciences Center, Toronto, Canada, observed for theheart.org | Medscape Cardiology. The SCAAR analysis should carry some weight in the left-main revascularization debate, he said, but it’s currently hard to say how much.

For many in the field, “all things being equal, surgery may be the preferred default for people with highly complex disease, with left-main disease, certainly those with diabetes. But there are many things that will alter that default strategy,” said Cohen, an interventional cardiologist not connected with the SCAAR registry.

For example, “In a real-world, all-comers registry, one thing that’s not controlled for is the goal of therapy. You could have an elderly patient with comorbidities and severe multivessel disease and severe symptoms,” in which case PCI might well be preferred. “The goal may not be to treat all the disease and extend life, [rather] it may be to get short-term symptom relief.”

In contrast, Cohen said, patients in randomized trials “are much more homogeneous coming into it, and the goal of therapy is presumably both symptoms and prognosis.”

“Registry data is hypothesis-generating,” noted Ben-Yehuda, an interventional cardiologist. “I don’t think it can or should inform our decisions to a large extent, except for some things that also make biological sense. For example, the higher risk identified in the SCAAR registry for CABG in those greater than age 80, I think is something we need to look at.” However, “I would advocate for registry-based randomized trials, especially where there is equipoise.”

The results aren’t surprising “given what we know about observational data,” and differences between the CABG cohort and “patients who were selected for PCI, not randomized to PCI,” Kirtane said as a panelist following Omerovic’s presentation.

“We know that these patients are inherently going to be different than the patients who are selected for surgery,” he said. “That’s the reason why we do randomized trials. And so a priori going into an analysis like this, if you had found something different — such as PCI associated with better outcomes — that would be surprising to me.”

Omerovic and Ben-Yehuda report no relevant financial relationships. Cohen discloses receiving grant support from and holding research contracts with Abbott Vascular; and receiving fees for consulting, honoraria, or serving on a speaker’s bureau for Abbott Vascular, Medtronic, and Baylis.