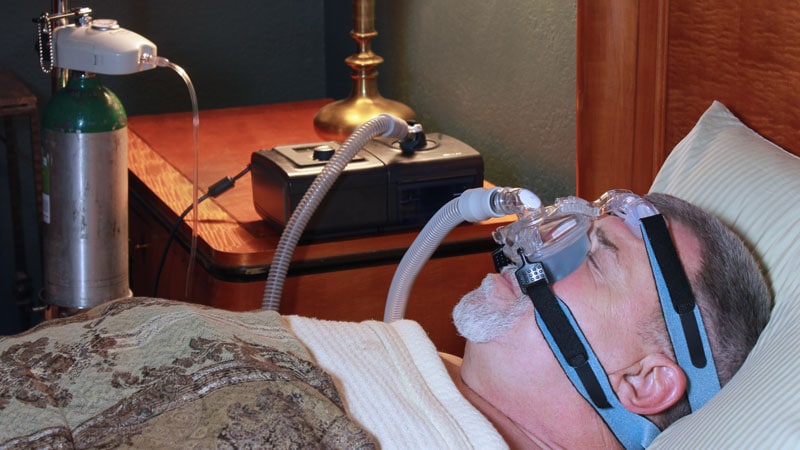 Patients with obstructive sleep apnea hypopnea syndrome (OSAHS) have evidence of pulmonary gas exchange abnormalities during exercise as well as resting systemic vascular dysfunction, which may explain why they have a reduced exercise capacity and increased exertional dyspnea while exercising, a cross-sectional observation study suggests.

“So, the question was how much these abnormalities could contribute to reduced exercise tolerance in untreated OSA,” she added.

“[We found that] patients with moderate-severe OSAHS had evidence of pulmonary gas exchange abnormalities during exercise in the form of increased wasted ventilation (ie, reduced ventilatory efficiency) and increased peripheral arterial stiffness at rest compared with age-and BMI-matched control subjects. These abnormalities solely, or in combination, may explain the reduced exercise capacity and increased exertional dyspnea observed during incremental CPET (cycle cardiopulmonary exercise test) in these patients,” the authors conclude.

The study was published online September 29 in the journal CHEST.

Patients had a mean age of 50 years, a mean BMI of 30.5 kg/m2 and a smoking history of only 2.4 pack-years (57% of the cohort were never smokers). Their FEV1 to forced vital capacity (FVC) was 0.78%, their FEV1 was 85% of predicted and the mean apnea hypopnea index was 43 per hour. Patients had not started treatment at the time of the study enrollment.

Results indicated that patients had greater activity-related dyspnea and a greater Epworth sleepiness scale scores and STOP-BANG scores than controls (P < .05). The STOP-BANG questionnaire is a measure of OSA.

“Furthermore, the intensity of leg discomfort was greater during exercise in patients with OSA compared with controls and patients had higher systolic and mean pulmonary arterial pressure (both P < .001),” the authors add. As Elbehairy explained, increased ventilatory requirements in their patient sample likely were the result of reduced ventilatory efficiency and the existence of areas with high ventilation or perfusion or both.

“Areas of high ventilation/perfusion may indicate a reduction in pulmonary blood perfusion density,” she elaborated. “And this will affect exercise performance and contribute to exertional dyspnea.”

Similarly, OSA was associated with increased peripheral arterial stiffness as well as greater pulmonary arterial pressure than controls. At least in theory, increased peripheral arterial stiffness could lead to impairment in the normal increase in cardiac output in response to exercise, although this was not measured in the current study, Elbehairy pointed out.

Increased pulmonary pressures can also reduce ventilatory efficiency and pressures may further increase during exercise, thus contributing to reduced exercise capacity.  “This is the first study to use CPET along with arterial blood gas sampling and resting echocardiography to systematically investigate the mechanisms of reduced exercise capacity in OSAHS,” the authors stated.

“Our results confirmed the finding of reduced exercise capacity in patients with moderate-severe OSAHS compared with control subjects regardless of their body weight,” the authors reaffirm. Elbehairy added that continuous positive airway pressure (CPAP) remains the gold standard treatment of OSA; given this, future studies are likely required to evaluate the long-term effect of OSA-specific treatments in reversing these abnormalities and, most importantly, in their ability to improve exertional symptoms.

Asked to comment on the findings, Nicolle Domnik, PhD, assistant professor of biomedical and molecular sciences, Queens University, Kingston, Canada, noted that numerous studies have demonstrated the presence and negative impact of gas exchange and ventilatory efficiency abnormalities in conditions like COPD. However, this work uniquely highlights how a condition that is perceived as an upper airway condition can impair cardiopulmonary function right down to the alveolar-capillary unit.

“The findings of this study not only illustrate the physiologic impairments that can occur in OSAHS, but notably illustrate the perceptual or sensory consequences of these cardiopulmonary limitations: patients with OSAHS experienced significantly higher perceived dyspnea — that is, subjective discomfort experienced with breathing ­— for a given level of exercise when compared with healthy controls,” she told Medscape Medical News in an email.

This breathing discomfort was associated with their impaired ventilatory function during exercise, she added: “In other words, the inability of [patients’] respiratory system to respond to the demands of exercise was a direct contributor to the unpleasant respiratory symptoms they experienced that led them to stop exercising,” Domnik explained. She also noted that importantly, it was the physiologic stress of exercise that unveiled many of the observed deficits in ventilatory and cardiovascular function — deficits that were not apparent at rest.

“Not only did these patients feel worse during exercise, their bodies responded worse to the demands of exercise,” she stressed. She also observed that this study adds to the mounting body of evidence that OSAHS directly contributes to the development of cardiovascular conditions like hypertension. In addition, “it also provides novel mechanistic evidence for how untreated OSAHS can additionally lead to marked respiratory system impairments and symptoms that persist into the daytime, particularly when taxed by the demands of exercise.

“And it opens the door to future investigations on whether treating OSAHS, especially during its earliest stages, might slow or stop the progression of this physiologic dysfunction and symptomatic burden in affected patients,” Domnik added.