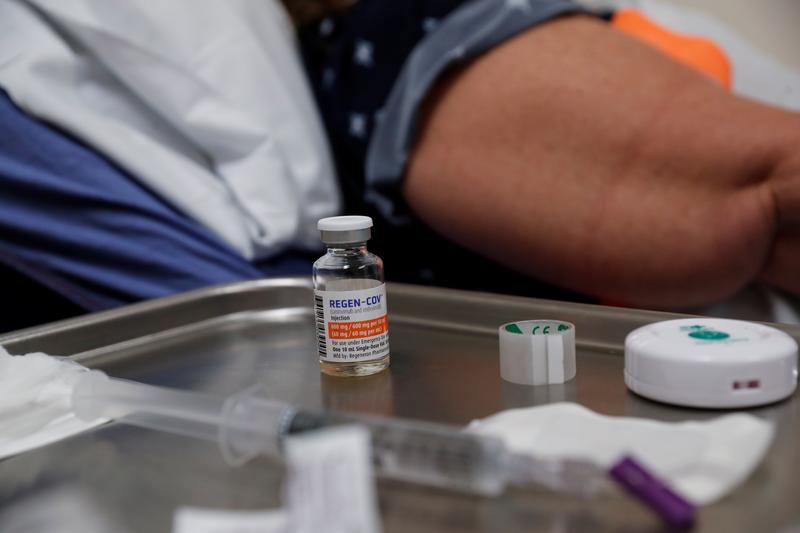 (Reuters) -Regeneron Pharmaceuticals reported better-than-expected revenue aided by sales from its COVID-19 antibody outside the United States and strong demand for its blockbuster drugs Dupixent and Eylea.

A vial of Regeneron monoclonal antibody sits on a medical table as registered nurse Jessica Krumwiede attempts to find a vein to administer it to Cathy Hardin, who was vaccinated prior to testing positive for the coronavirus disease (COVID-19), at the Sarasota Memorial Urgent Care Center in Sarasota, Florida, U.S., September 23, 2021. REUTERS/Shannon Stapleton/File Photo

About $216 million in first-quarter sales from the COVID pill through a partnership with Roche, which sells the drug outside the United States under brand name Ronapreve, helped Regeneron limit the setback from no sales in the United States– its biggest market.

Regeneron in February warned it will record zero sales from the pill in the United States for the first quarter after the U.S. Food and Drug Administration limited its use due to lack of effectiveness against the Omicron coronavirus variant.

The drugmaker is now working on experimental “next generation” antibodies that are tailored against variants including those of Omicron-lineage.

It was the revenue from Roche collaboration that helped in the topline beat, Wells Fargo analyst Mohit Bansal said in a note.

Shares of Regeneron were marginally up at $668 in premarket trade, after the company said its overall sales grew 17% to $2.97 billion in the first quarter, which was higher than the average analyst estimate of $2.72 billion, as per Refinitiv IBES data.

They have been key drivers for the company’s earnings growth, and the company and analysts are both optimistic about further growth for the two drugs.

Regeneron’s net profit in the quarter ended March 31 fell 13% to $974 million from a year earlier.