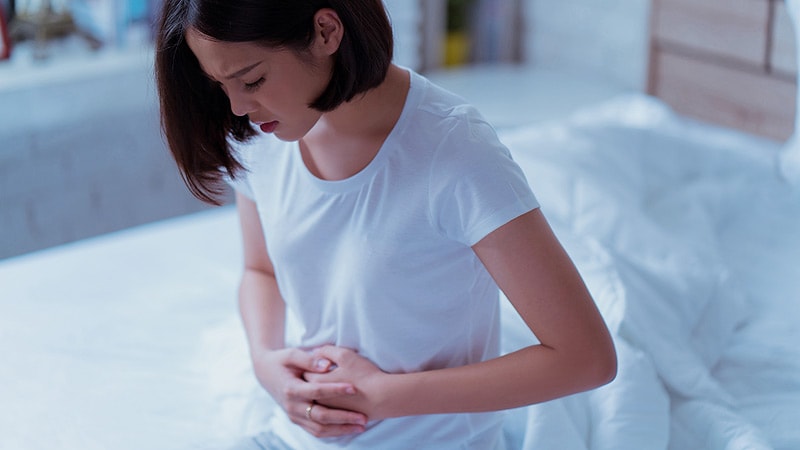 Combination therapy with relugolix (Orgovyx, Relumina), a gonadotropin-releasing hormone antagonist, significantly reduced the pain of uterine fibroids, an undertreated aspect of this disease.

In pooled results from the multicenter randomized placebo-controlled LIBERTY 1 and 2 trials, relugolix combination therapy (CT) with the progestin norethindrone (Aygestin, Camila) markedly decreased both menstrual and nonmenstrual fibroid pain, as well as heavy bleeding and other symptoms of leiomyomas. This hormone-dependent condition occurs in 70%-80% of premenopausal women.

“Historically, studies of uterine fibroids have not asked about pain, so one of strengths of these studies is that they asked women to rate their pain and found a substantial proportion listed pain as a symptom,” lead author Elizabeth A. Stewart, MD, director of reproductive endocrinology at the Mayo Clinic in Rochester, Minn., said in an interview.

The combination was effective against all categories of leiomyoma symptoms, she said, and adverse events were few.

Bleeding has been the main focus of studies of leiomyoma therapies, while chronic pain has been largely neglected, said James H. Segars Jr., MD, director of the division of reproductive science and women’s health research at Johns Hopkins Medicine in Baltimore, who was not involved in the studies. Across both of the LIBERTY trials, involving 509 women randomized during the period April 2017 to December 2018, more than half overall (54.4%) met their pain reduction goals in a subpopulation analysis. Pain reduction was a secondary outcome of the trials, with bleeding reduction the primary endpoint. Other fibroid symptoms are abdominal bloating and pressure.

“The consistent and significant reduction in measures of pain with relugolix-CT observed in the LIBERTY program is clinically meaningful, patient-relevant, and together with an improvement of heavy menstrual bleeding and other uterine leiomyoma–associated symptoms, is likely to have a substantial effect on the life of women with symptomatic uterine leiomyomas,” Stewart and colleagues wrote. Their report was published online in Obstetrics & Gynecology.

Segars concurred. “This study is important because sometimes the only fibroid symptom women have is pain. If we ignore that, we miss a lot of women who have pain but no bleeding.”

The premenopausal participants had a mean age of just over 42 years (range, 18-50) and were enrolled from North and South America, Europe, and Africa. All reported leiomyoma-associated heavy menstrual bleeding of 80 mL or greater per cycle for two cycles, or 160 mL or greater during one cycle.

Pain was a frequent symptom, with approximately 70% in the intervention group and 74% in the placebo group reporting fibroid pain at baseline.

Women were randomized 1:1:1 to receive:

The therapy was well tolerated and adverse events were low.

Studies of relugolix monotherapy  in Japanese women with uterine leiomyomas have demonstrated reductions in pain.

“Significantly, this combination therapy allows women to be treated over 2 years and to take the oral tablet themselves, unlike Lupron [leuprolide], which is injected and can only be taken for a couple of months because of bone loss,” Segars said. And the add-back component of combination therapy prevents the adverse symptoms of a hypoestrogenic state.

“The pain of fibroids is chronic, and the longer treatment allows time for the pain fibers to revert to a normal state,” he explained. “The pain pathways get etched into the nerves and it takes time to revert.”

He noted that the LIBERTY trials showed a slight downward trend in pain continuing after 24 weeks of treatment. Other studies of similar hormonal treatments have shown a reduction in the size of fibroids, which can be as large as a tennis ball.

As in endometriosis, leiomyomas are associated with elevated circulating cytokines and a systemic proinflammatory state. In endometriosis, this milieu is linked to the risk of inflammatory arthritis, fibromyalgia, lupus, and cardiovascular disease, Segars said. “If we did a deeper dive, we might find the same associations for fibroids.” Apart from chronic depression and fatigue, fibroids are linked to downstream pregnancy complications and poor outcomes such as miscarriage and preterm birth, he said.

“There remains a high unmet need for effective treatments, especially nonsurgical interventions, for women with uterine leiomyomas,” the authors wrote. Stewart added that “it would be helpful to learn more about how relugolix and other drugs in its class work in fibroids. No category of symptoms has been unresponsive to these medications – they are powerful drugs to help women with uterine fibroids.” She noted that relugolix-CT has already been approved outside the United States for symptoms beyond heavy menstrual bleeding.

Future research should focus on developing a therapy that does not interfere with fertility, Segars said. “We need a treatment that will allow women to get pregnant on it.”

Myovant Sciences GmbH sponsored LIBERTY 1 and 2 and oversaw all aspects of the studies. Stewart has provided consulting services to Myovant, Bayer, AbbVie, and ObsEva. She has received royalties from UpToDate and fees from Med Learning Group, Med-IQ, Medscape, Peer View, and PER, as well as honoraria from the American College of Obstetricians and Gynecologists and Massachusetts Medical Society. She holds a patent for methods and compounds for treatment of abnormal uterine bleeding. Segars has consulted for Bayer and Organon. Several coauthors reported similar financial relationships with private-sector entities and two coauthors are employees of Myovant.