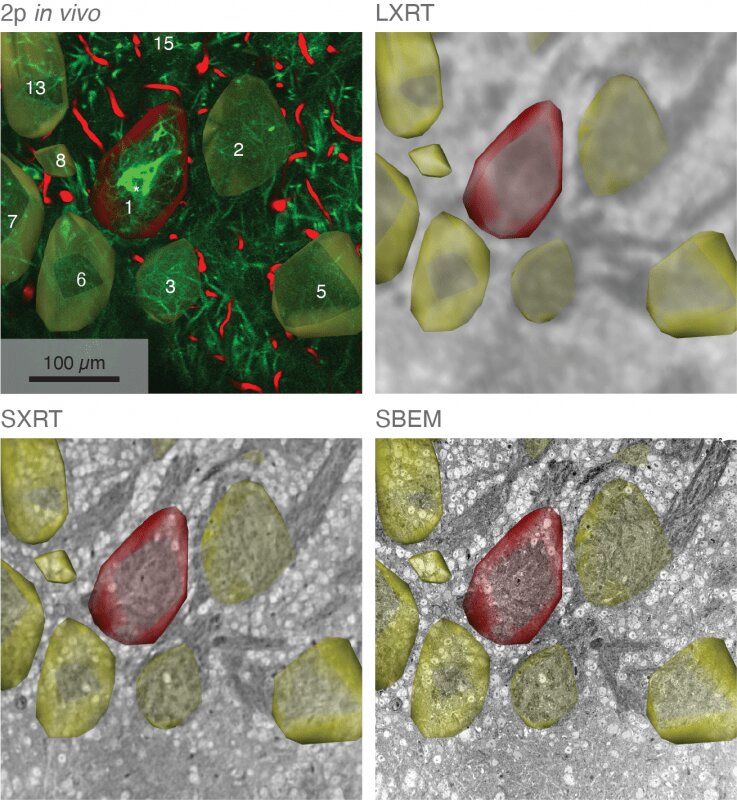 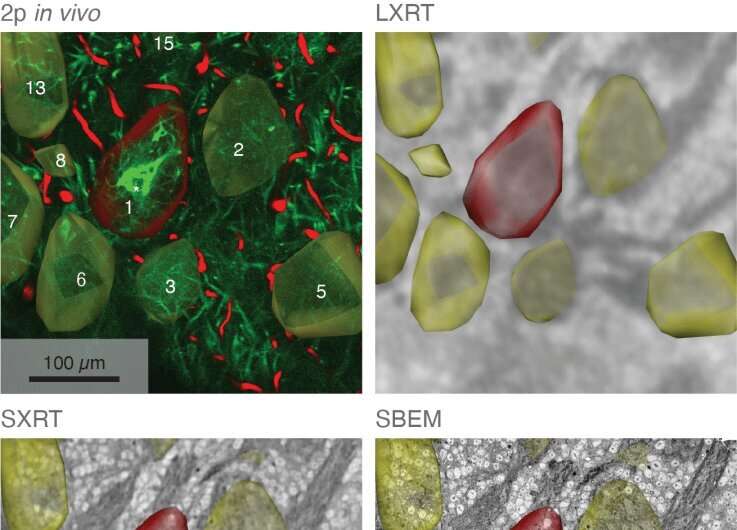 The unique approach detailed in Nature Communications today (25 May), overcomes the challenges of imaging tissues at different scales, allowing scientists to see the surrounding cells and how they function, so they can build a complete picture of neural networks in the brain.

In their study, the scientists developed an approach which combines seven imaging methods, including in vivo imaging, synchrotron X-ray, and volume electron microscopy. They demonstrated their approach by imaging two different areas of the brain in mice—the olfactory bulb and the hippocampus.

Importantly, the technique could be applied to other areas of the brain or parts of the body, providing scientists with a more detailed understanding of many different biological structures and tissues.

Each step of the imaging process provides different information. Firstly, the researchers used in vivo calcium imaging to visualize neurons in specific regions of the brain and see which neurons were active when the mice were exposed to odors.

After the mice were euthanized, brain tissue samples were imaged using various methods including synchrotron X-ray tomography, which captures samples up to several millimeters in length. This scale is sufficient for scientists to see whole neural networks and also where particular cells or other structures sit within the wider context of the sample. Importantly, this method does not damage the sample so it can be imaged again using another technique.

The researchers then selected areas of particular interest to be imaged with electron microscopy, capturing intricate detail at a high resolution. At some target areas this could map details as small as 10 nanometers, allowing researchers to see tiny structures like the individual synapses that connect neurons.

Using computer algorithms, they combined the results to create a complete map of the structure and function of the section of the brain they were studying, up to a few cubic millimeters.

Carles Bosch, first author and Principal Laboratory Research Scientist in the Sensory Circuits and Neurotechnology Laboratory at the Crick says: “Our approach provides a reliable way to overcome the challenge of imaging structures at vastly different scales. We believe it will be a powerful tool to investigate neuronal circuits in the brains of mammals as well as the structure and function of other tissues.”

Andreas Schaefer, senior author and head of the Sensory Circuits and Neurotechnology Laboratory at the Crick says: “We’re interested in applying this approach to the brain, where it is important to gather information about whole neural networks which are several millimeters in length alongside information about specific neurons and synapses.