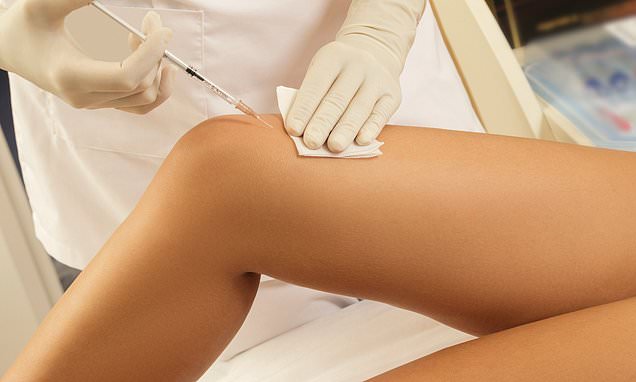 Hope is on the horizon for millions of arthritis patients after scientists have found a vaccine could treat their daily agony.

Osteoarthritis sufferers currently have to rely on painkillers to combat their excruciating pain.

But Oxford University researchers have developed a vaccine which blocks the cause of the agony – nerve growth factor (NGF).

The vaccine triggered the immune system to work against the naturally occurring NGF in mice, numbing their pain.

Figures estimate nearly nine million people suffer with osteoarthritis in the UK and 30million in the US.

There is currently no cure for the condition but the latest findings could pave the way for more effective treatment. 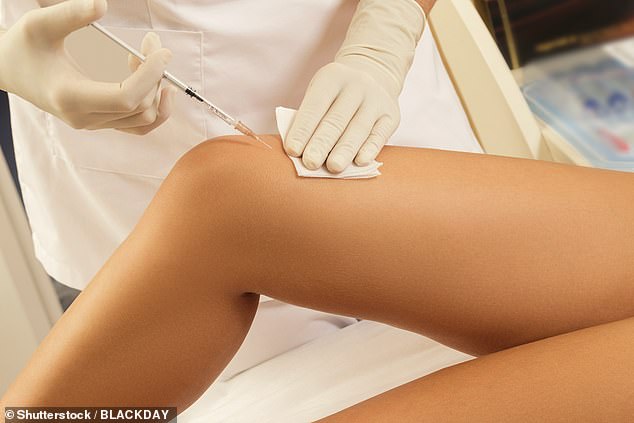 Professor Tonia Vincent, co-author of the study published in Annals of Rheumatic Disease, said: ‘This is the first successful vaccination to target pain in osteoarthritis, one of the biggest healthcare challenges of our generation.’

The vaccine triggers the immune system to produce antibodies that would work against the NGF.

It was tested in mice that had uneven distribution of weight across the hind legs – which the scientists said was a sign of painful osteoarthritis.

The vaccine, which has been described as ‘very promising’ by a charity, was shown to visibly reverse their pain.

Instead of leaning to one side due to the pain in their leg, the mice stood with their weight more evenly distributed.

The mice who had been given the vaccine also had higher levels of antibodies, which was ‘appeared to be associated with an analgesic response’.

And the vaccine, named CuMVttNGF, helped relieve pain in the mice when it was given both before and after pain had taken hold.

Osteoarthritis – sometimes called ‘wear and tear’ – is a condition that occurs when the surfaces within joints become damaged.

Cartilage covering the ends of bones gradually thin over time, and the bone thickens, according to Arthritis Research UK.

Around a third of people aged 45 years and over in the UK suffer from the condition. This equates to roughly 8.75 million people. At least 20 million are known to suffer in the US.

It is different to rheumatoid arthritis, a long-term illness in which the immune system causes the body to attack itself, causing painful, swollen and stiff joints.

Replacement joints are often necessary for osteoarthritis patients, because the joint has been worn down and causes agonising pain.

The authors said the total cost of osteoarthritis, the most common joint disease, to the economy of developed countries is estimated between 1-2.5 per cent of the GDP.

Arthritis UK predicts that working days lost due to arthritis will reach 25.9million by 2030, equating to an annual £3.43billion productivity hit to the economy. By 2050 these figures will increase to 27.2million working days and an annual cost of £4.74billion.

X-ray studies show at least 50 per cent of people older than 65 have evidence of osteoarthritis, according to NICE – a UK health watchdog, but there are limited treatment options.

Fewer than 25 per cent of patients currently have adequate pain control for their condition, and long-term use of painkillers are well known to pose significant risks.

The team at Oxford believe a vaccine could be more effective for pain and cost of treatment.

Professor Vincent said: ‘Whilst there are still safety issues that need to be considered before these types of approaches can be used in patients, we are reassured that this vaccine design allows us to control antibody levels and thus tailor treatment to individual cases according to need’.

Dr Stephen Simpson, from charity Versus Arthritis, which funded the research said: ‘We know that for the ten million people with arthritis, persistent pain is life changing.

‘Too many people living with pain do not get effective relief from the treatments that are currently available.

‘And that is why the development of more effective pain killers, with fewer side-effects, is vital for people living with arthritis.

‘Although at an early stage, this is highly innovative research and these results are very promising.

‘We are proud to support research such as this, which aims to tackle this urgent problem and discover new ways to help people overcome pain.’