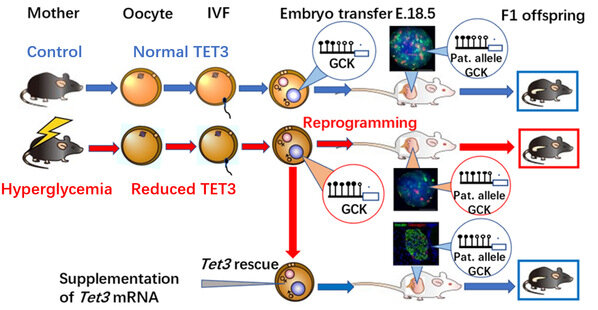 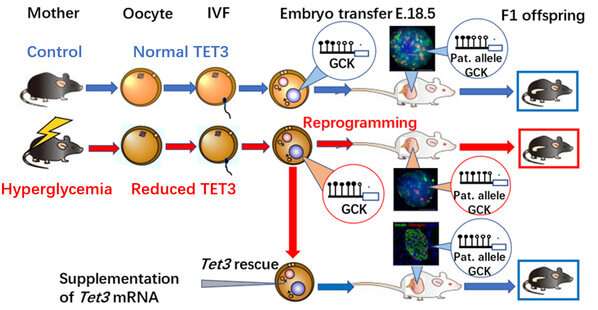 Symptomatic treatment has been a common approach to chronic diseases in the past. For example, diabetes is treated by controlling the increase of glucose and alleviating various diabetes-induced complications with insulin. How to prevent diabetes has remained elusive in the scientific and medical community however, and it has become a global research hotspot to discover the origin of the disease to allow early intervention.

Recently, the team led by Prof. Huang Hefeng from Women’s Hospital at the Zhejiang University School of Medicine and the team led by Prof. Xu Guoliang from the Center for Excellence in Molecular Cell Science at the Chinese Academy of Sciences discovered a new mechanism for the intergenerational transmission of diabetes. Their research indicated an environment-sensitive window in oocyte development that confers predisposition to glucose intolerance in the next generation. These research findings were published in the May 18 issue of Nature.

Prof. Huang Hefeng, a reputable obstetrician and gynecologist, was intrigued by the potential impact of a mother on her offspring. To this end, she led her team to conduct research on the diseases of adult offspring caused by adverse maternal environmental factors. The team found that exposure to high glucose/androgen could trigger the inter-generational or trans-generational inheritance of chronic diseases by altering the DNA methylation profile of in utero embryos/fetuses or by affecting the epigenetic modifications of sperms/eggs. Prof. Huang concluded from clinical investigations and animal models that such chronic diseases as diabetes and hypertension could be of developmental origin and therefore pioneered in reporting the hypothesis of “epigenetic inheritance via gametes.” Nonetheless, this hypothesis remained unverified.

To confirm this hypothesis, Prof. Huang’s team began to focus on the following questions: Do pregestational maternal environmental factors affect the health of offspring? Does maternal hyperglycemia increase the risk of chronic diseases via oocytes?

To address these questions, the team built a female hyperglycemic mouse model. To rule out the ongoing effects of hyperglycemia on embryological and fetal development, they ingeniously removed affected oocytes for in vitro fertilization and embryo transfer to healthy foster mice to produce offspring. Metabolic measurements showed that their offspring exhibited impaired glucose tolerance, indicating that the oocytes, where were affected by the adverse hyperglycemic environment, increased the susceptibility to chronic diseases. Thus the finding supported Prof. Huang’s hypothesis.

In face of this significant discovery, the team started to wonder about the very “culprit” that increases the susceptibility to diabetes in offspring. After a series of complex experiments, they found the key—TET methylcytosine dioxygenase 3 (TET3)—and proposed the regulatory pathways to chronic diseases in offspring through TET3 insufficiency.

The joint research by Prof. Huang Hefeng and Prof. Xu Guoliang confirmed that the high glucose environment in hyperglycemic female mice resulted in the insufficient dose of TET3 protein in oocytes, thus contributing to TET3’s poor capability of reprogramming in the zygote and eventually “insufficient demethylation” or “hypermethylation.”

How does TET3 increase the susceptibility to diabetes in offspring? The glucokinase gene (GCK) is one of the most important proteins regulating insulin secretion. During the replication and division process of a fertilized egg, the hypermethylation of relevant genes related to insulin secretion, including GCK, triggers the poorly-tapped potential of TET3. This TET3 insufficiency lasts into adulthood in offspring. Hypermethylation and low expressions of such genes as GCK lead to inadequate insulin secretion, decrease in lowering blood glucose, and increase in vulnerability to diabetes as they grow older.

This study was also confirmed in clinically diabetic pregnant women. Immature oocytes and discarded balstocysts from clinically diabetic patients received in several hospitals in Hangzhou and Shanghai also exhibited reduced TET3 expressions and hypermethylation in the GCK promoter region, respectively. This further suggested the clinical significance of this study.