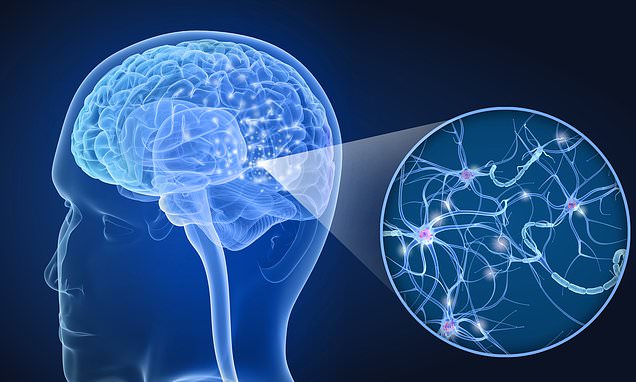 Scientists have uncovered more evidence that Parkinson’s could start in the gut.

Researchers injected a protein thought to cause the crippling condition into the intestines of rats.

They witnessed it spread to the brain at a ‘striking speed’, within the space of just two months.

The experts believe the findings could apply to humans, adding to a plethora of similar studies over the past decade. 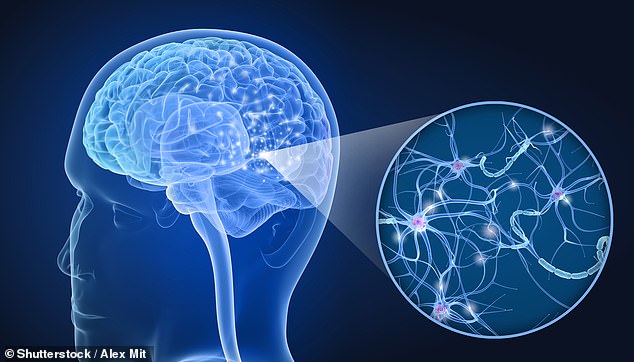 Parkinson’s is caused by alpha-synuclein molecules clumping together and then damaging neurons in the brain. Scientists have uncovered more evidence that Parkinson’s actually starts in the gut, and travels to the brain

Academics based at Aarhus University, Denmark, conducted the study, publishing their findings in the journal Acta Neuropathologica.

‘The suspicion that the disease begins in the gut of some patients has gained considerable support.

‘With this new study, we’ve uncovered exactly how the disease is likely to spread from the intestines of people.

‘We probably cannot develop effective medical treatments that halts the disease without knowing where it starts and how it spreads – so this is an important step in our research.’

Parkinson’s takes hold in the brain years before patients notice symptoms, which include tremors and slow movement.

Identifying the incurable disorder earlier could improve outcomes for millions of patients and halt the progression.

Parkinson’s is thought to be caused by alpha-synuclein molecules clumping together and then damaging neurons in the brain.

The researchers at Aarhus injected alpha-synuclein into the small intestines of the laboratory rats.

Professor Borghammer and study lead Nathalie Van Den Berge predicted the protein would spread to the brain but intended to discover how.

Professor Borghammer said: ‘After two months, we saw that the alpha-synuclein had travelled to the brain via the peripheral nerves.’

He said it involved the same structures ‘known to be affected in connection with Parkinson’s disease in humans’.

‘After four months, the magnitude of the pathology was even greater,’ he added. ‘It was actually pretty striking to see how quickly it happened.’

The study also found harmful alpha-synuclein also travelled to the heart, which they believe has not been found in research before.

When Parkinson’s is diagnosed, there is already significant damage to the brain and nervous system.

But scientists are starting to find that it may be possible to detect alpha-synuclein in the gut up to twenty years before diagnosis.

Professor Borghammer said: ‘For many years, we have known that Parkinson patients have extensive damage to the nervous system of the heart, and that the damage occurs early on. We’ve just never been able to understand why.

‘The present study shows that the heart is damaged very fast, even though the pathology started in the intestine.’

Parkinson’s affects a million Americans and 127,000 Britons, according to figures.

Scientists first began reporting that patients who had alpha-synuclein in their brains also had it in their gut in 2003.

German neuroanatomist Heiko Braak hypothesized the proteins travelled up the nerves into the brain like a ladder – where they clump up and cause nerve tissues to die.

Since, a plethora of evidence has added weight to his theory, and Professor Borghammer noted their findings come just weeks after a similar study in the US.

In June, experts at the Johns Hopkins University School of Medicine, Maryland, showed proteins travel from the stomach into the base of the brain via the vagus nerve in mice.

And in July, scientists at Montreal University in Canada revealed how damage in the gut affects the brain through the hormone dopamine.

Researchers injected mice with a mild intestinal bug, which sent their immune systems into overdrive.

This reduced the release of dopamine from the brain and ultimately led to Parkinson’s, according to the findings published in the journal Neuron.

Other work has found people with Parkinson’s often report digestive problems up to 20 years before they notice tremors.

There’s also evidence that those with Parkinson’s have different gut bacteria to other healthy adults.

WHAT IS PARKINSON’S? THE INCURABLE DISEASE THAT STRUCK BOXER MUHAMMAD ALI

Parkinson’s disease affects one in 500 people, and around 127,000 people in the UK live with the condition.

It causes muscle stiffness, slowness of movement, tremors, sleep disturbance, chronic fatigue, an impaired quality of life and can lead to severe disability.

It is a progressive neurological condition that destroys cells in the part of the brain that controls movement.

Sufferers are known to have diminished supplies of dopamine because nerve cells that make it have died.

The disease claimed the life of boxing legend Muhammad Ali in 2016.