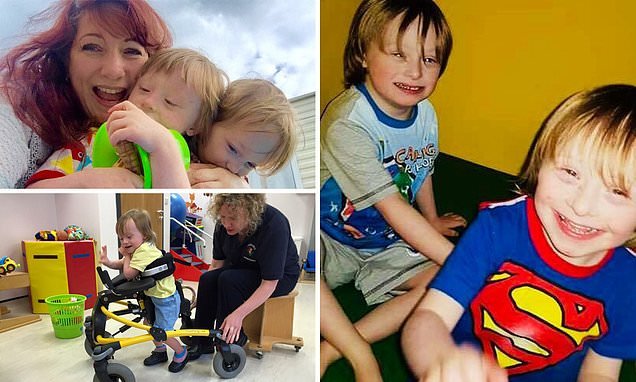 A single mother has revealed the heartbreak of raising one-in-a-million twins with Down’s syndrome and wishes she could make their disabilities disappear.

Emma Mullard, 36, found out she was pregnant with her twins just weeks after turning off life support for her baby girl who also had Down’s syndrome.

The devoted mother-of-five is a full-time carer for her boys, Alfie and Arthur, who are now six years old.

The boys are one of only 29 sets worldwide, and can’t communicate, have autism, weak muscle tone, and use walkers or wheelchairs to move around.

Despite saying she adores them, Miss Mullard has revealed that she understands why mothers want terminations when they find out their child will have Down’s syndrome. 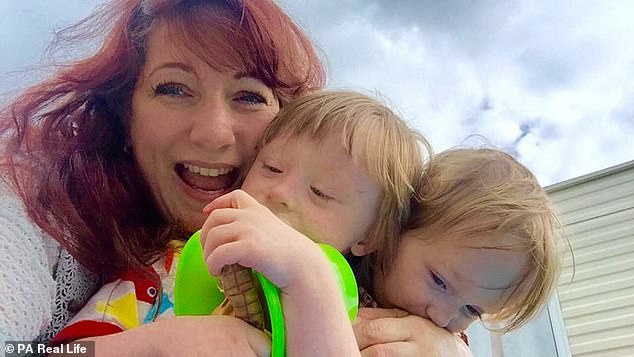 Emma Mullard, 36, has revealed the heartbreak of raising one-in-a-million twins with Down’s syndrome and wishes she could make their disabilities disappear 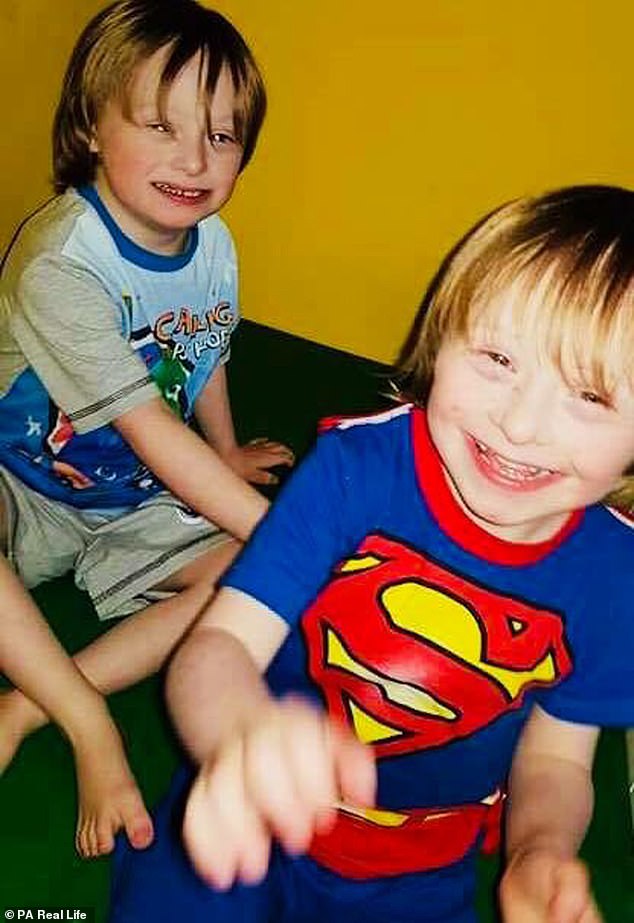 Alfie and Arthur, who are now six years old, are cared for by their mother, from Lancashire 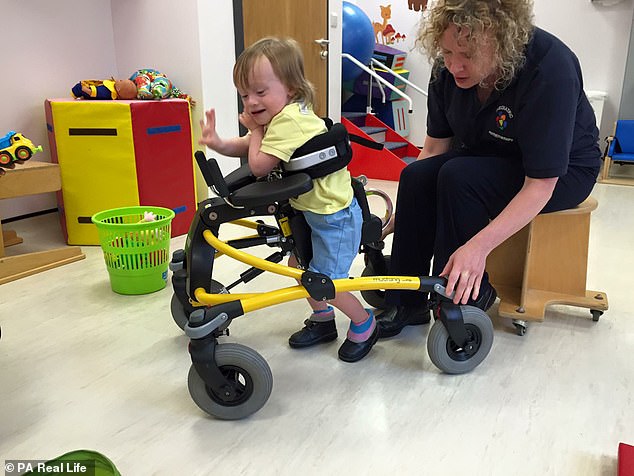 The boys can’t communicate, have autism, weak muscle tone, and use walkers or wheelchairs to move around. Pictured, one of the boys having physical therapy

Miss Mullard said: ‘People say to me, “Don’t you love them as they are?” And I absolutely do, but anyone who has a child with a disability would whip it away from them if they could.

‘The oldest man in the world with Down’s syndrome is around 70 and I see adults who have died at 40 or 50, and that’s not old.

‘It’s frightening to know that they could go that young. I don’t want to get old and have to bury my boys.’

When Miss Mullard, of Preston, Lancashire, fell pregnant again, she had no idea the twins she was carrying also had the condition, but felt sure it would not strike twice.

Miss Mullard had said goodbye to her five-month-old baby, Molly, in August 2011, just weeks before discovering she was pregnant again.

Molly had a multitude of Down’s syndrome related problems – including a heart murmur and under-developed lungs – and a machine was keeping her alive.

Miss Mullard said: ‘When I found out I was having them I thought to myself, “They’re not going to have Down’s syndrome, which is caused by an extra chromosome, because it’s too unlikely”.’

When Alfie and Arthur were delivered by C-section at 36 weeks on July 4 2012 at Royal Preston Hospital, weighing 6lbs and 6lb 12oz, Miss Mullard saw their unmistakable features and knew they had Down’s syndrome. 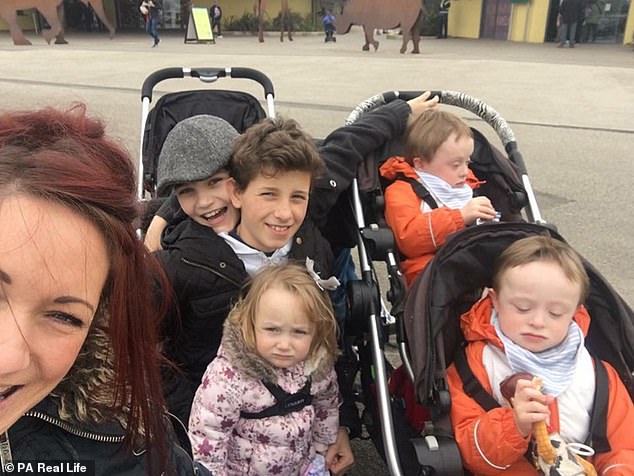 Miss Mullard, who is also mother to Harry, 14, Ben, 13, and Elsie, three, had just finished teacher training when her twins were born, but quit her job to care for them 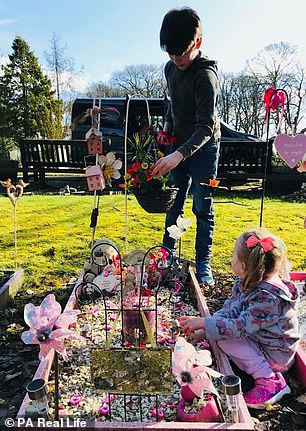 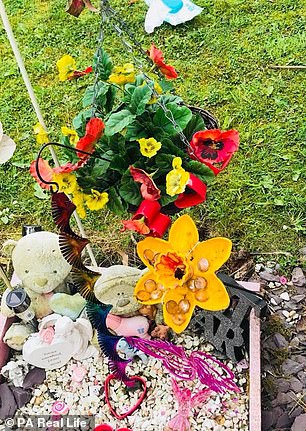 Miss Mullard had said goodbye to her five-month-old baby, Molly, in August 2011, just weeks before discovering she was pregnant again. Pictured, Molly’s grave 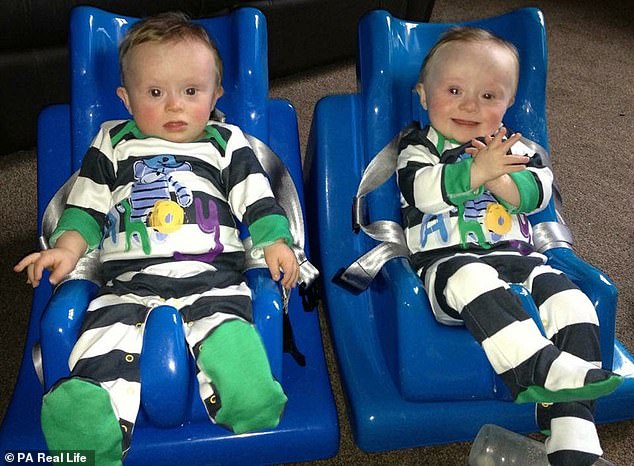 Doctors were unable to diagnose Down’s syndrome before the birth, but had discovered that the twins were showing signs of a developmental problem at the 11 week scan.

Miss Mullard said:  ‘I remember the midwife holding Alfie up and I saw the same features that Molly had. I knew as soon as they were born that they had Down’s syndrome.

‘The medics swooped them away and my initial thought was that was the last time I was going to see them alive.

‘I thought I was going to lose another child all over again, it was so scary.

‘Even now I panic when the kids have a cold or anything. When you’ve lost a child, you know how quickly they can be taken away from you.’

Describing the moment she lost Molly, Miss Mullard said: ‘She didn’t even come home. I knew she had Down’s syndrome when I was pregnant, but she was born with everything possible connected to it wrong with her.

‘If she was still alive, she would have been coming up to eight and living off a machine, but I didn’t want that for her.

‘The hospital did everything possible to keep her alive, but it just wasn’t enough, so we removed life support and said goodbye.’

When Miss Mullard took her babies home, she said she ‘scooped them both up and looked at them, vowing to look after them’.

‘I knew it was a long hard road ahead, but that I would do everything possible for them,’ she said.

Miss Mullard, who is also mother to Harry, 14, Ben, 13, and Elsie, three, had just finished teacher training when her twins were born.

But she quit work in December 2012 to become the twins’ full-time carer.

Sadly, Miss Mullard and their father split up shortly after their birth, as he found it ‘very difficult’ and their relationship changed. 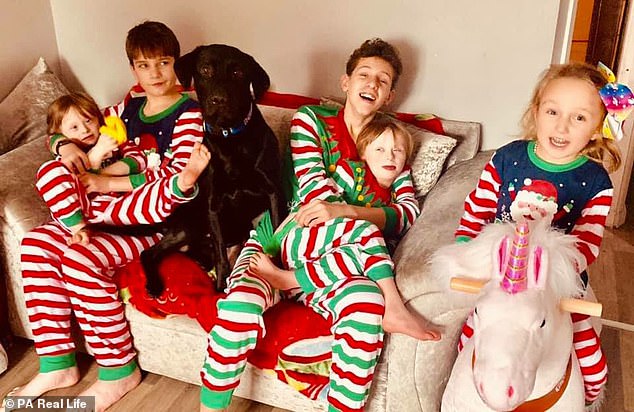 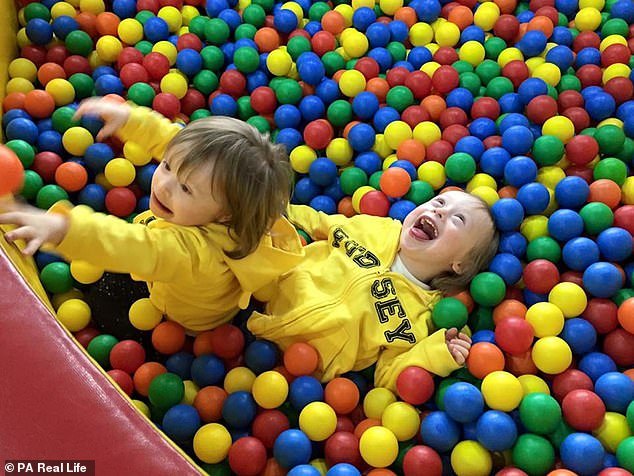 Alfie and Arthur understand Makaton, a simplified version of British sign language, but, sadly, are unable to communicate themselves using it 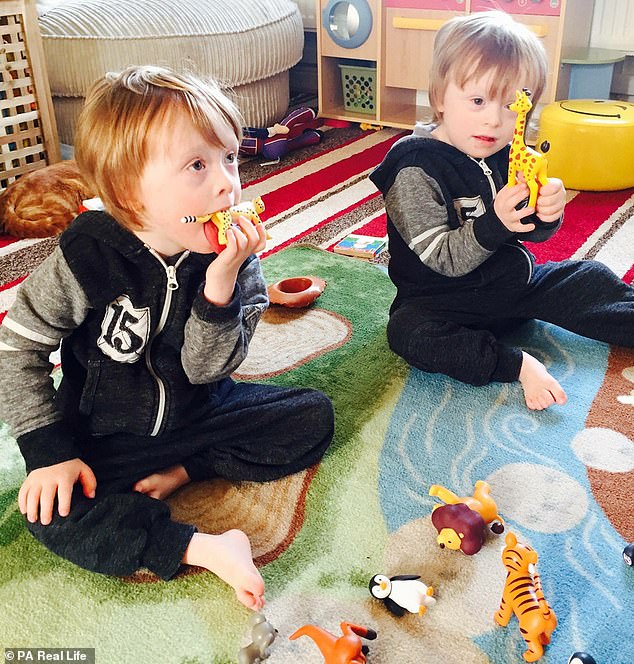 Alfie and Arthur, pictured recently, go to a specialist school in Preston

Miss Mullard said: ‘I do love my boys, but there are a lot of medical appointments and being a single parent is draining.

‘But the twins are so worth it and I don’t regret having them in any way, shape or form. I absolutely adore them.’

Understanding Makaton, a simplified version of British sign language, but, sadly, unable to communicate themselves using it, Arthur and Alfie are thriving at a Preston specialist school.

Despite her love for them, Miss Mullard admits, however, that if she could wave a magic wand and make their disabilities disappear, she would.

She explained: ‘When they turn 18, they should be out clubbing, and I should be at home worrying about them, but that’s never going to happen.’

Knowing the effort required by parents of children with Down’s syndrome, Miss Mullard understands when some mothers terminate – especially as a new 99 per cent accurate test, which can detect the syndrome, has been available on the NHS since May 2018.

With government data showing that the number of terminated pregnancies in this category are up from 427 in 2007 to 655 in 2017, Miss Mullard said: ‘I don’t believe the new test will necessarily change anything. 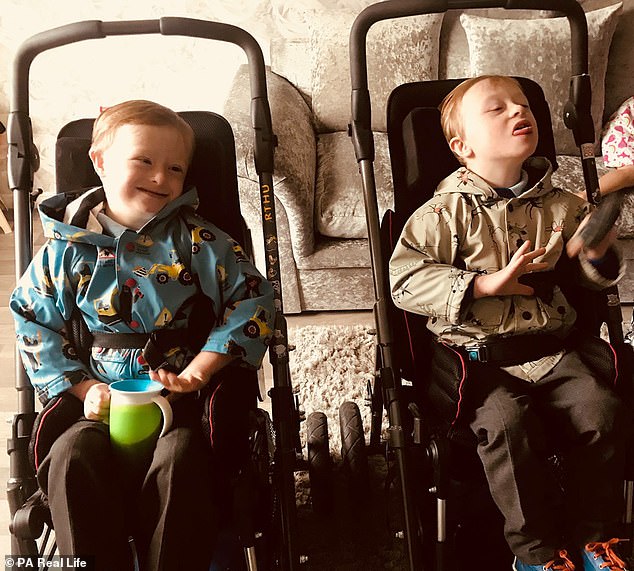 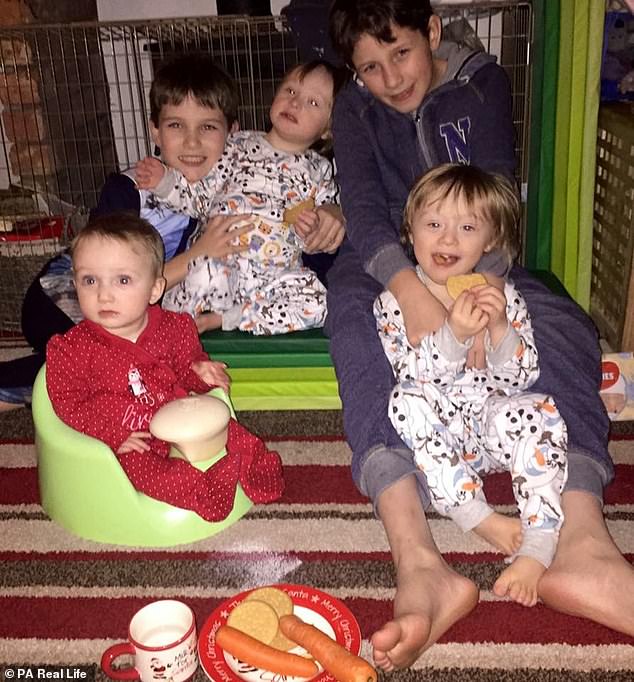 The Down’s Syndrome Library state that twins with Down’s syndrome occurs in only one or two in a million twin births. Pictured, the children together at Christmas

‘Even if I fell pregnant with another baby with Down’s syndrome now, I wouldn’t have an abortion, as I know I can cope, but some people can’t.

‘What type of life will that child have if the parents can’t cope with it? It’s why we have so many children put up for fostering and adoption with disabilities, so it needs to be each person’s decision. There is no one right way.’

Fortunately, for Miss Mullard, who has adjusted her entire life to her boys’ needs, even changing dentist, as it was not wheelchair accessible, bringing up Down’s syndrome twins remains a joy.

She said: ‘Your social life does tend to flicker out and I can’t do anything on a whim anymore. I used to go camping every weekend, but I’ve bought a caravan and adapted it to their needs instead.

‘Still, I adore my boys and I love being their mum.’

WHAT IS DOWN’S SYNDROME?

Down’s syndrome is a genetic condition that typically causes some degree of learning disability and certain physical characteristics.

Screening tests can uncover Down’s syndrome during pregnancy but are not completely accurate.

It is caused by an extra chromosome in a baby’s cell due to a genetic change in the sperm or egg.

The risk increases according to the age of the mother.

A 20-year-old woman has around a one in 1,500 chance of having a baby with Down’s syndrome.

There is no evidence women can reduce their risk.

Down’s syndrome does not have a cure.

People with Down’s syndrome are more at risk of health complications such as heart disorders, hearing problems, thyroid issues and recurrent infections.