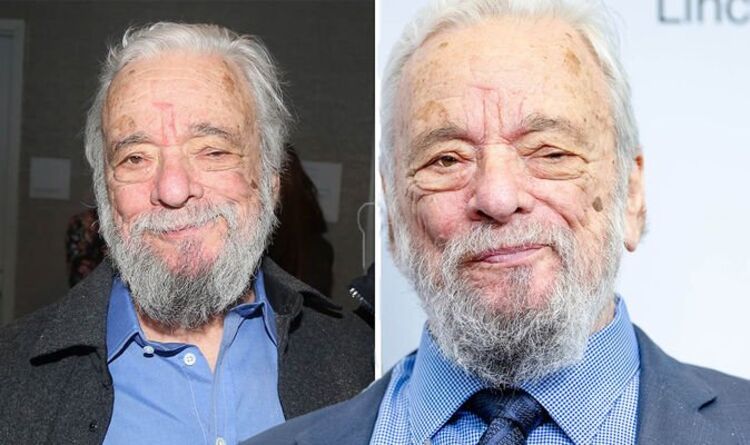 The legendary composer, who devoted his life to writing both music and lyrics was awarded eight Tony Awards during his lifetime, in addition to an Academy Award, eight Grammy Awards and an Olivier Award. But towards the end of his life, concerns for Sondheim’s health started to increase, especially after the star fell at his USA home, leaving him with a torn ligament. Despite this injury, when Sondheim sadly passed away, many close to him expressed that he had no previous illnesses, and that his death came unexpectedly.

Shortly after his fall, Sondheim released a statement, in light of a London theatre being renamed in his honour. The star said: “As I recover from my tumble, I’m impatient to throw away my cane, grab my hat and head across the pond as soon as I can to see on which cherub Cameron [Mackintosh] has tattooed my initials.

“I am, to put it mildly, chuffed to have my name on a theatre in the West End I have loved visiting ever since my first trip to London almost seventy years ago.”

Due to his fall, Sondheim’s “mobility” was compromised, something that became more worrying due to his old age.

Johns Hopkins Medicine explains that ligaments are bands of tough, elastic connective tissue that surround a joint to give support and limit the joints movement. When damaged, joints can become unstable and severely limit movement.

A torn ligament can also be known as a sprain, and can cause swelling, bruising, cramping and weakness. However, in the days following injury, the NHS recommends following four steps in order to reduce swelling and support the injury:

Although it is unknown if this injury and subsequent strain on his mobility contributed to his cardiovascular disease (CVD), there is evidence to suggest that being physically inactive can increase an individual’s risk of the group of conditions.

Due to the nature of diseases that the term covers, CVD is the leading cause of death globally, with an estimated 17.9 million individuals passing away from the conditions back in 2019, according to the World Health Organisation.

Although symptoms may vary depending on the specific condition an individual has, some common symptoms of CVD include:

There are four main types of CVD, which tend to affect individuals the most. These are: Coronary heart disease, strokes and TIAs, peripheral arterial disease and aortic disease.

The first, coronary heart disease occurs when the flow of oxygen-rich blood to the heart is either blocked or reduced. Due to this, strain on the heart increases putting individuals at risk of the following:

Differing slightly, a stroke is caused by a blocked blood supply to the brain, putting individuals at risk of permanent brain damage. A transient ischaemic attack (TIA or “mini-stroke”) is similar, but the blood flow to the brain is only temporarily disrupted.

Due to the severity of the condition, individuals can spot the main symptoms of a stroke or TIA by remembering the following:

Peripheral arterial disease occurs when there’s a blockage in the arteries to the limbs. Usually the condition affects the legs, and can cause dull or cramping leg pain, hair loss on the legs and feet, numbness in the legs or persistent ulcers.

Finally, aortic diseases are a group of conditions affecting the aorta – the largest blood vessel in the body, which carries blood from the heart to the rest of the body. One of these conditions is known as an aortic aneurysm, where the aorta becomes weakened and bulges outwards.

Although this doesn’t usually cause any symptoms, there is a chance the bulge could burst and cause life-threatening bleeding.

Therefore, leading a healthy lifestyle can dramatically reduce an individual’s risk of CVD. The NHS recommends adults do at least 150 minutes of moderate activity a week, such as cycling or brisk walking, as well as keep their body mass index (BMI) below 25.

Maintaining a healthy weight is also helped by eating a balanced diet, one which includes:

In addition to preventing CVD, lifestyle changes such as the above are a main treatment used for those already diagnosed with a health condition, as well as medication and surgery.