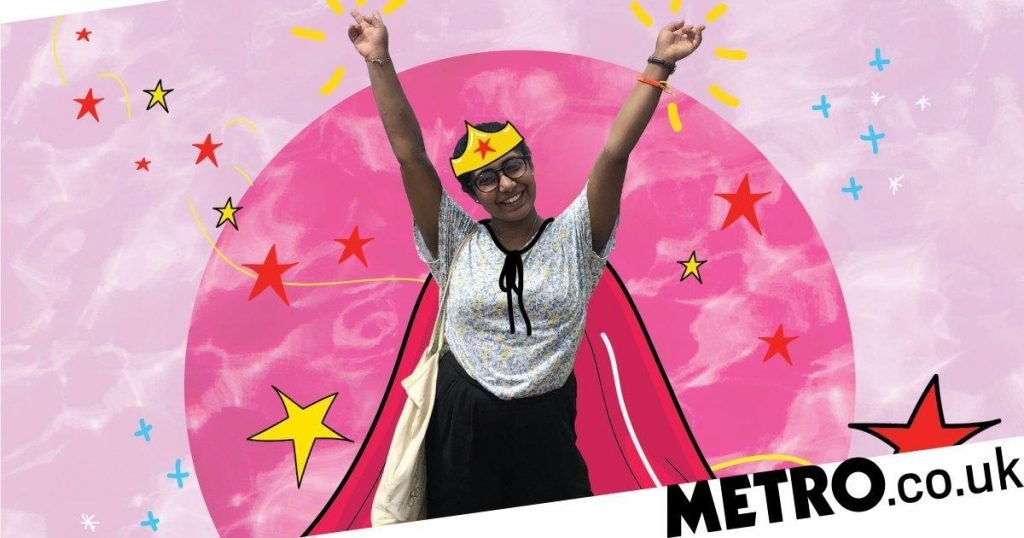 Welcome to Strong Women – a weekly series that aims to redefine what it means to be both strong and female.

In the media and in advertising we are overwhelmed with images of a singular kind of woman; young, slim, white, able-bodied – but the reality is that you can be any age, size or race to be fit, healthy and love your body.

It’s so important for women to see a diverse picture of strong women – particularly when 75% of women say that fear of judgement puts them off being active.

We want to change perspectives, challenge the social norms and remind women that you can strong and active regardless of your appearance.

Sharlene Gandhi takes a holistic approach to fitness that includes her body and mind. She loves yoga but says the world of mainstream fitness is whitewashing the traditional practice.

With time, you automatically find that your body becomes a bit looser, a bit more supple, a bit more flexible and can reach around to the nooks and crannies you thought were impossible. The process takes time, a different amount of time for everybody, and there is no rush to get there.

I have so far only been to one yoga class that was taught by someone of South-Asian origin, and she was probably the best teacher I had ever come across. She chanted in Sanskrit throughout the class, which in itself was enchanting and relaxing.

Having grown up doing an Indian classical dance form that often also includes Sanskrit singing and chanting, I feel quite emotionally attached to practices like yoga and traditional meditation.

Yoga is also supposed to be hands-on and your guru is supposed to help you become more comfortable in your postures. I often find that with ‘quick-fix’ yoga classes, teachers are detached from their students and studios often overfilled to the point of discomfort.

The difficulty for me stems from the fact that yoga has been turned into something it is not – what I like to call the LA-fication of yoga has changed it into a gym-goer’s dream, when it’s actually a holistic exercise that stimulates the mind just as much as the body.

In some of the classes I attend though, the mindfulness has been sucked right out in favour of squeezing in just one more stretch or back-bend or posture.

I don’t necessarily find it difficult being the only brown woman in classes, but I do find it saddening that people of colour are increasingly seeing yoga as something that isn’t for them anymore, largely because of the wider fitness culture that has swallowed yoga under its wing.

I like being the only brown woman in class – I’ll often say my ‘Om’, ‘Namaste’ and other mantras a little bit too loudly to make sure everyone around me knows that I’m pronouncing it correctly.

Why do you think of yourself as a strong woman?

Strength comes in a lot of different forms, I think. I’m still working mine out and to be honest, I think I will be for a long time.

Part of my strength comes from being headstrong, which means doing what I want to do and not doing what I don’t want to do. An easy example is refusing an alcoholic drink, especially if I’ve got some form of physical activity planned the next day.

People often underestimate how difficult it is to say no when everybody around you is saying yes, or vice versa, but I’ve found real power in knowing what I want to do and saying it out loud.

I wouldn’t be a strong woman without so many other strong women in my life who I look up to: my mother, my sister, my two grandmothers, my aunts, my female cousins, all of whom have carved out incredible careers in difficult circumstances. My female friends, for continuing to challenge me but knowing me better than myself. And of course, all of the inspirational women I meet along the way who continue to spur me on.

Aly Raisman, captain of the US women’s gymnastics team at the London 2012 Olympics, will forever be the one woman that I fell head-over-heels in love with from the moment I saw her in her element.

Raisman was an incredibly supportive captain to her younger peers, always smiling and cheering them on.

My favourite moment of the Olympics – and perhaps ever – was when she performed her near-perfect floor routine and cried before she’d even landed her final jump, knowing full-well that she had smashed it out the ballpark.

Seeing young, sporting women achieving their dreams on a global stage brought 16-year-old me to tears – I can’t say I then began to pursue any of my sports on a world championship level, but I certainly was, and still am, endlessly inspired by Raisman’s hard work.

Why do we need to change perceptions about what it means to be a strong woman?

Being a strong woman rarely comes without the add-ons: bossy, aggressive, stubborn, rude.

It seems that women can’t just be ‘strong’, they have to be strong with a caveat. Personally, I’m the stubborn kind of strong – and I’ve grown to like it a little bit.

This is why the perception of strength needs to change. Our strength doesn’t need to be masculine, assertive, or self-centred.

Our strength can simply be in inspiring other women, and bringing those around us up with us.

Our strength can be talking to or smiling at somebody when they’re having a bad day.

Our strength can be our ability to overcome obstacles.

Our strength can be emotional.

Our strength can be whatever we want it to be, and we should learn to celebrate this diversity in strength.

MORE: Strong Women: ‘People with scars suffer in silence and are forced to hide away’

MORE: Strong Women: ‘I used cycling as an escape from grief – but it brought me back to life’

MORE: Strong Women: ‘We lost everything, I was suicidal. Signing up for an Ironman saved me’