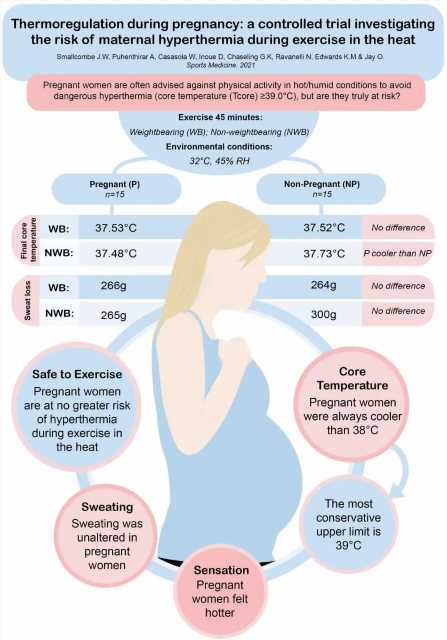 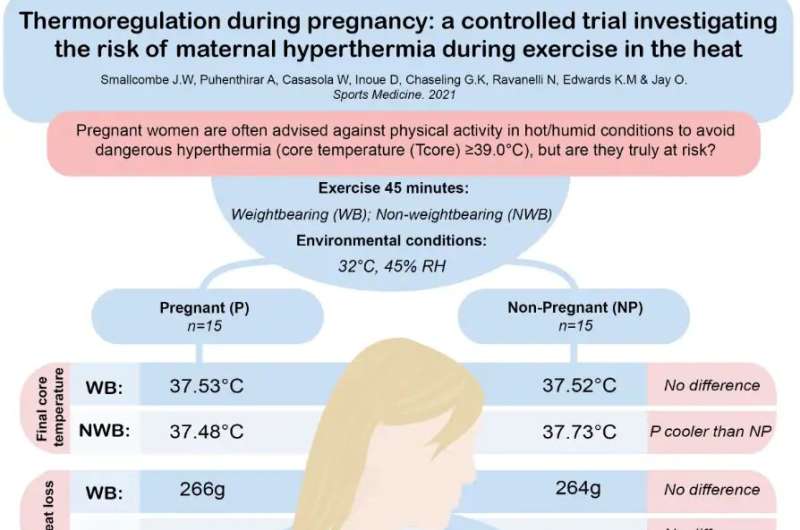 Pregnant women are at no greater risk of dangerous ‘overheating’ when exercising in hot weather compared to non-pregnant women, according to a world-first Australian study.

The findings question recommendations discouraging exercise in hot weather due to the potential risk to the unborn child associated with ‘overheating’ or maternal hyperthermia, defined as a rise in core body temperature above 39 degrees Celsius or 102 degrees Fahrenheit.

The research is led by the University of Sydney’s Thermal Ergonomics Laboratory and was recently published in Sports Medicine.

“This is the first study to show that pregnant women can safely engage in moderate-intensity exercise for up to 45 minutes at up to 32 degrees Celsius (90 degrees Fahrenheit) and 45 percent relative humidity with minimal risk of overheating,” said senior author Professor Ollie Jay of the University of Sydney’s Faculty of Medicine and Health and Charles Perkins Centre.

“This is important information, given the increasing temperatures globally and the well-known downstream benefits of regular physical activity throughout pregnancy to both mother and child.”

How was the study conducted?

Whilst there was a small sample size, the robust design of the study (conducted under carefully controlled laboratory conditions so that other contributors of thermoregulatory “noise” were minimized) enabled the researchers to soundly determine with a high level of confidence whether any thermoregulatory differences existed between pregnant and non-pregnant participants. The study found the relatively low core temperatures in exercising pregnant women were consistent across participants irrespective of gestational age above 23 weeks.

What did they find?

The study did not involve pregnant women in their first trimester, with the youngest gestational age of a participant being 23 weeks. However, based on the evidence gathered, the researchers do not foresee any reason why the thermoregulatory responses would differ during the very early stages of pregnancy.

“Prior to this research, experimental studies have only examined the thermoregulatory responses of pregnant women at temperatures as high as 25 degrees Celsius, which is far from representative of the hotter temperatures that are common during summers globally,” said Dr. Smallcombe, postdoctoral researcher at the Thermal Ergonomics Laboratory.