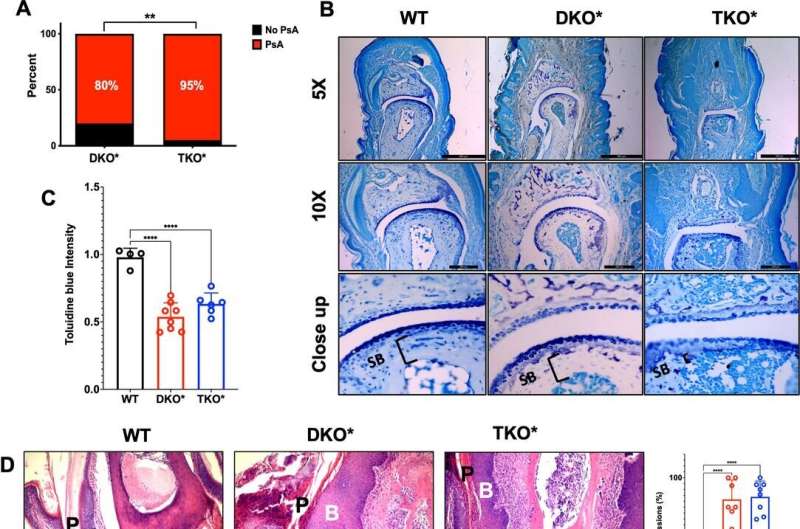 About 250,000 people in Austria suffer from psoriasis. One third of them develop inflammation in their joints (psoriatic arthritis) as a result of the chronic skin condition. As part of a study, a MedUni Vienna research team has now discovered a key starting point for inhibiting inflammation in both psoriasis and psoriatic arthritis. The researchers’ findings may form the basis for developing new treatment, diagnostic and prevention strategies. The study has now been published in the journal Annals of the Rheumatic Diseases.

The study conducted by the research group led by Erwin Wagner (Department of Dermatology and Department of Laboratory Medicine, MedUni Vienna) focused on the S100A9 gene, which has long been at the center of its internationally acclaimed scientific research into psoriasis. The team has discovered that the severity of psoriasis (Ps) and psoriatic arthritis (PsA) can be reduced by inhibiting S100A9 systemically throughout the whole body rather than locally on the skin.

With this finding, the MedUni Vienna researchers are laying the foundation for a paradigm shift in the treatment of Ps and PsA: “Our study is an important step towards the development of targeted therapeutic options in the form of drugs that act systemically rather than locally on the skin,” affirms Erwin Wagner. New diagnostic and prevention strategies can also build on the study.

Psoriasis is one of the most common chronic inflammatory skin conditions that can also spread to the joints. Triggers for the disease, which usually first appears in adulthood, include stress and UV radiation. However, individuals can also be genetically predisposed to developing Ps. S100A9 activation in skin and immune cells has been identified as a risk factor for the development of Ps and/or PsA.