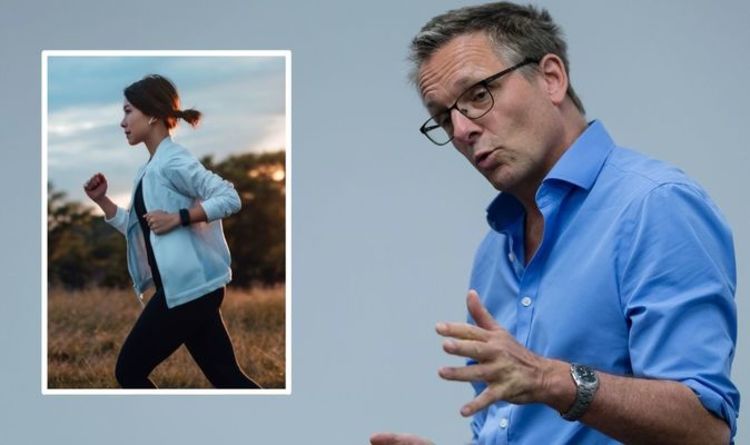 Dr Michael Mosley on the benefits of exercise

The simple movement that can help burn calories is standing up, Dr Michael Mosley revealed. He also explained why you should start standing up more on his BBC Radio 4 podcast. Prolonged sitting can be “incredibly bad” as it leads to “some pretty nasty” health problems.

“I’ve been sitting at my desk now for an hour or so trying to get some work done,” Dr Mosley started the podcast.

He added: “I’m about to do something that really could have a long-term impact on my health by lowering my blood sugars and burning a surprising amount of calories.

“It’s as simple as that, I’m standing up. I’m not about to go for a walk with the dog or do my beloved squats.

Even though standing up is a simple practice that can be done from the comfort of your home, it can still burn a “surprising” amount of calories.

In fact, the Just One Thing host said it can burn the equivalent of running 10 marathons.

Dr Mosley explained: “A few years ago, I was involved with a study, where we asked office workers to stand for an extra three hours a day for a week.

“We found that simply standing up raised their heart rates so much so that one of the researchers calculated that if you added it up over a year, you would burn the same calories as if you ran about 10 marathons.”

This simple movement isn’t only beneficial for burning calories, but it can also boost your health, help your metabolism and bones.

The reason why standing up is important is not only the benefits, but also because prolonged, uninterrupted sitting is “incredibly bad for us”, the podcast doctor said.

“In the UK, many of us spend 10 hours a day or more on our backsides and sadly that is linked to some pretty nasty health outcomes, including an increased risk of heart disease, type 2 diabetes and even death from all causes,” Dr Mosley added.

This is also proved by studies the doctor mentioned in his podcast.

For example, research from 1950 found that bus drivers were twice as likely to have heart attacks as bus conductors due to the sedentary nature of their work.

The Just One Thing doctor also warned that exercising might not be enough to reverse the outcomes of prolonged sitting down.

“Now, you might think it’s okay to spend lots of time sitting on your bottom as long as you lead an active life outside work hours.

“But that’s not the case. Emerging evidence suggests that unless you’re doing at least 40 minutes of moderately vigorous exercise daily, you cannot undo the damage that prolonged sitting causes.

“Even worse if you sit for long periods, this actually decreases the benefits of exercise.

“You just have to break up the time spent sitting down,” he added.

How much do I need to be standing up?

Dr Mosley recommends standing up for a few minutes every hour.

The “Stand Up” episode’s guest, John Buckley, a Professor of Applied Exercise Science at University Centre Shrewsbury, added: “At work [stand up] at least two or three times in an hour for a couple of minutes. Just get up on your feet.

“Remind yourself to just move and stand up as frequently as you can.”

The professor also encourages taking telephone calls whilst standing as people tend to walk about whilst phoning, which creates an added benefit.