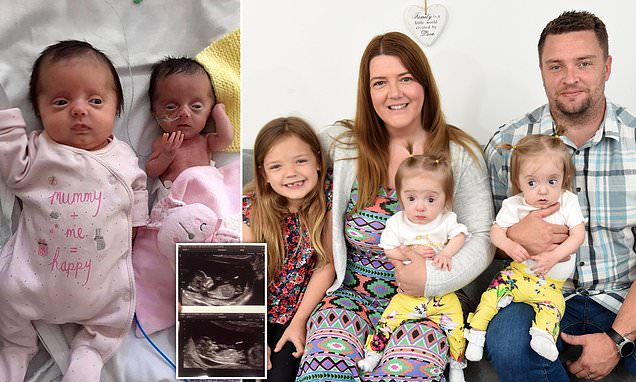 The twins ‘made of glass’: 17-month-old sisters defy the odds after doctors gave them a ‘zero per cent chance of survival’ because of a rare disease that caused them to endure fractures in the WOMB

A mother has revealed how her seventeen-month-old twins have defied the odds after doctors gave them a zero per cent chance of surviving.

Claire Mowforth, 34, was told her babies had osteogenesis imperfecta, or brittle born disease, while she was still pregnant.

Scans showed the youngsters endured broken bones in the womb, with doctors warning the mother-of-three and her husband Phil, 35, the twins would not make it.

Against all odds, Amelia-Grace and Hope-Elizabeth Mowforth were born on April 4 last year – but had 15 broken bones each.

With Amelia having five fractured ribs and Hope weighing just 2lb (0.9kg), doctors maintained their chances of survival were ‘slim’.

The twins, from Hull, pulled through yet again and were home with their parents and sister Grace, seven, within four months.

However, life is still ‘hard’, with the girls being at risk of fractures every time they sneeze, roll over or have their clothes changed. 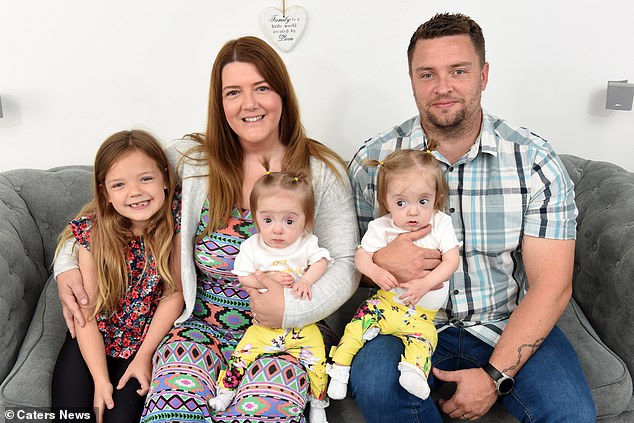 Mother Claire Mowforth has revealed how her seventeen-month-old twins Amelia-Grace and Hope-Elizabeth Mowforth defied the odds to survive despite being ‘made of glass’. Mrs Mowforth is pictured recently with the twins, her eldest daughter Grace and husband Phil 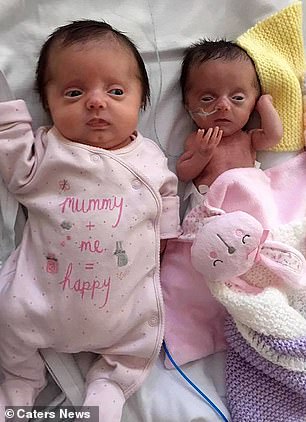 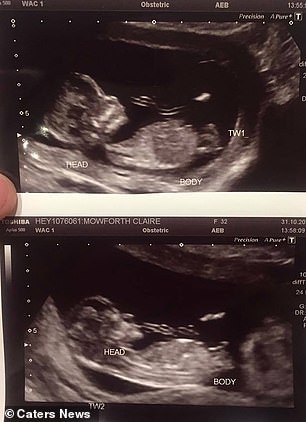 The twins (pictured left as newborns) were delivered with 15 broken bones each on April 4 last year. Amelia weighed 5lb (2.2kg) and had five fractured ribs. Hope weighed just 2lb (0.9kg) and stopped breathing shortly after the birth. Scans (right) revealed they broke bones in the womb

Speaking of her daughters’ condition, Mrs Mowforth said: ‘It’s as though they are made of glass.

‘In the early days we were constantly questioning every cry, working out whether it was a normal baby cry or if they were in pain due to new fracture.

‘We were almost scared to touch them because even the slightest movement can result in a broken bone.

‘Anything from a sneeze or cough, to an awkward role or fall can cause fractures’.

Mrs Mowforth and her husband, a network operation manager, were thrilled when she became pregnant with twins.

The couple, who are also parents to seven-year-old Grace, had tried for years to conceive again via IVF.

However, their joy was short-lived when a 13 week scan showed the babies shared a placenta. This is unusual and can result in complications.

Doctors decided to keep an eye on the twins with extra scans. These showed one of the girls had a soft skull and both had endured fractures in the womb.

The medics reportedly gave the girls a ‘zero chance of survival’.

It is unclear what type of OI the pair have – but most babies with type two will not survive, according to Kids Health.

Mrs Mowforth, a former support worker, said: ‘We tried to remain positive but we were told the condition they had could be lethal.

‘Thoughts of funerals crossed our mind which was unbearable.’ 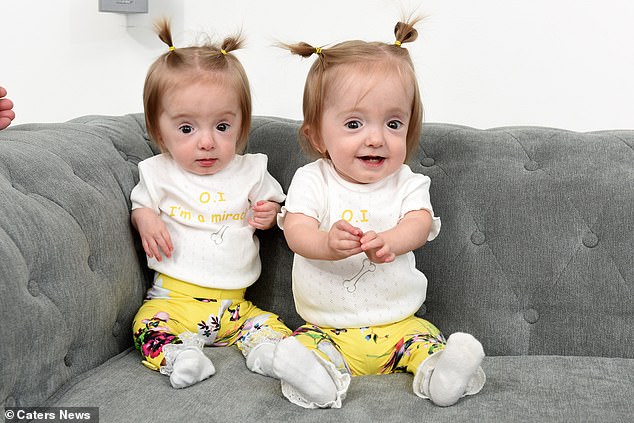 The girls defied the odds to survive, however, life is still ‘hard’. The youngsters (pictured recently) are at risk of fractures every time they sneeze, roll over or have their clothes changed 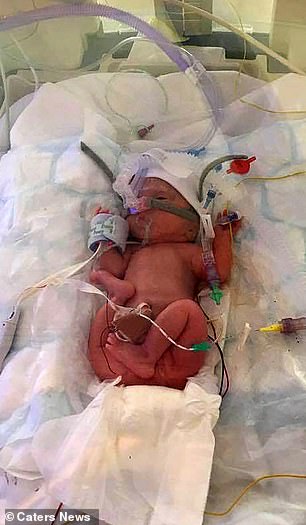 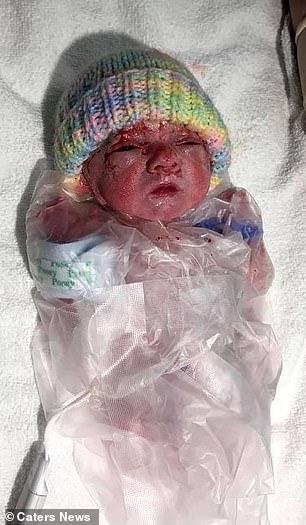 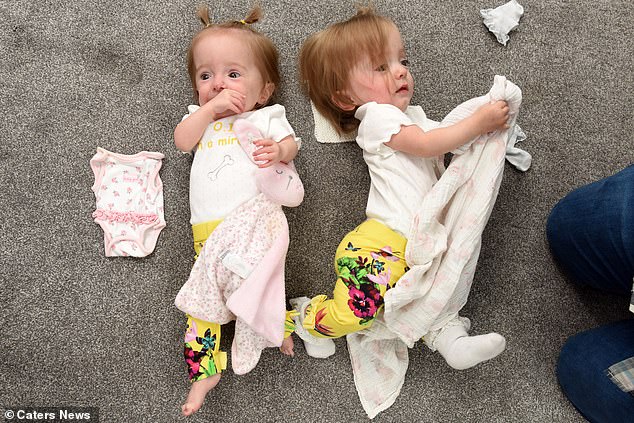 Despite all they have endured, the twins ‘amaze their parents every day’. Amelia (right) could roll over at six months and was sitting up by month 10. Hope (left) ‘struggled more’

WHAT IS OSTEOGENESIS IMPERFECTA?

Osteogenesis imperfecta (OI) is a genetic condition that causes a sufferer to break bones with ‘minimal impact’.

It is caused by missing, reduced or low quality collagen.

Collagen is a protein that is responsible for bone structure.

Defects cause bones to be weak and fracture easily.

OI is present at birth and can be mild or severe. It is thought to strike around one in 15,000 people.

Most OI patients are treated via physiotherapy and symptom management.

With Mrs Mowforth’s due date approaching, the couple were referred to Hull Royal Infirmary.

Doctors explained that due to the twins’ condition, their bones were likely to break during the birth and they would need to be taken to the neonatal intensive care unit immediately.

‘They were such tiny little things and so fragile,’ Mrs Mowforth said. ‘They were taken straight to NICU and placed on breathing devices.’

Amelia was born with five fractured ribs, which is thought to have been caused by labour.

Although she recovered and was home two weeks later, her sister was less lucky.

‘Amelia came home first, we really struggled to juggle our time between home and hospital – at times it really tested our relationship,’ Mrs Mowforth said.

After being treated with ‘heart medication’ and drugs to reduce her blood pressure, Hope finally went home at four months old.

‘We had to learn different methods for handling but even just placing limbs in clothing caused a fracture on Hope.

‘Another fracture happened whilst carrying out normal blood pressure check.

‘Seeing the girls suffering fractures is heartbreaking, we’re constantly on edge with every movement.

‘We still have family members today who are too afraid to hold them, which is very upsetting.’

Despite all they have endured, the girls are doing well. ‘Every day they amaze us,’ Mrs Mowforth said.

‘They’ve overcome so much, and really are our little miracles.’

The twins will have rods placed in their legs to help strengthen and straighten their limbs when they are around three years old.

They will also undergo infusions of the drug pamidronate every three months to prevent bone mass loss.

The family have been provided with medical and sensory equipment by the charity Nice 2b Nice. Find out more here. 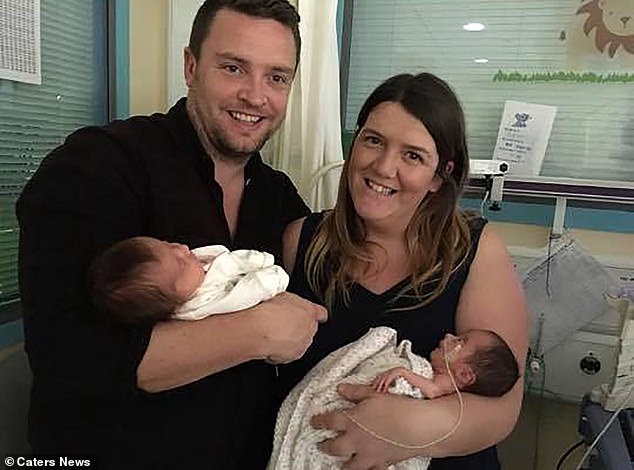 The parents ‘had to learn different ways of handling’ their newborns (pictured) given their condition. Some family members are still ‘too afraid to hold them’ 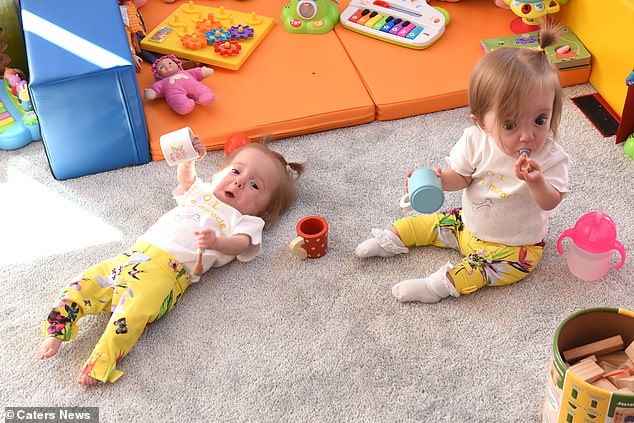 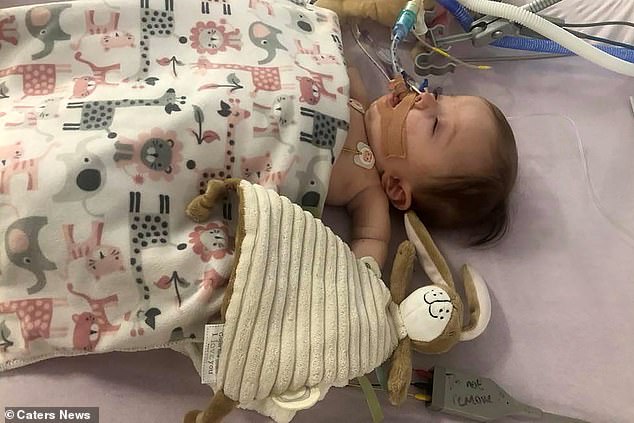 Hope (in hospital) was home later than her sister, which ‘tested her parents’ relationship’