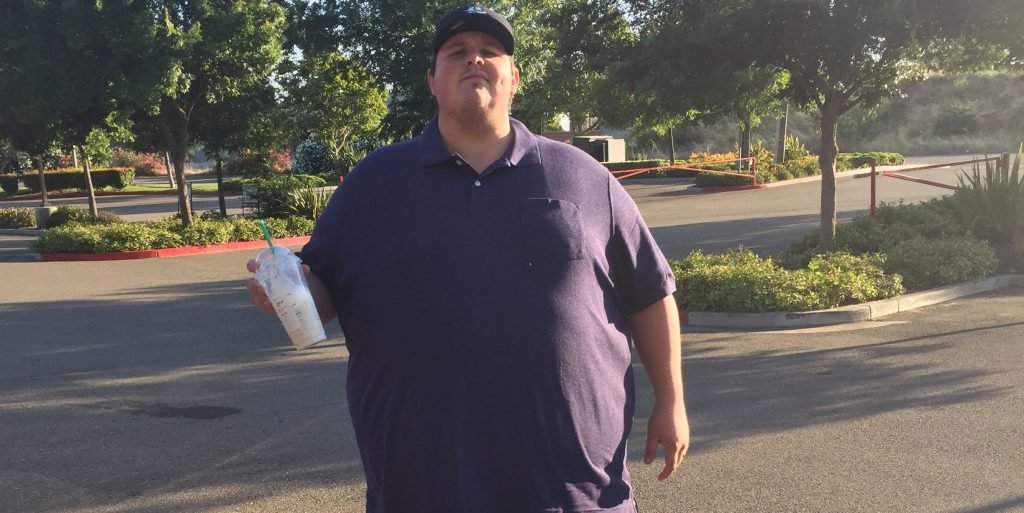 Dustin Hall had always been a big guy. For most of his adult life, he’d hovered around 400 pounds. Even as a baby, he was much larger than the average man, weighing nearly 12 pounds at birth. But in his early thirties, a combination of stress, inactivity, and unhealthy eating habits all combined to make his weight climb to the heaviest he’d ever been, topping out at an alarming 534 pounds.

“I’d started to replace the hardships of my life with food, and I got lazy and passive with my health,” says Hall, now 35, who works as an auto damage advisor for a California insurance company.

Looking back, Hall recalls how much his weight left him feeling restricted. “I remember not being able to tie my shoes. I wouldn’t be able to cross my legs, and I would sweat doing basic things like bending down.” He felt trapped and confined, and his mood darkened. “I wasn’t living anymore,” he says. “I was working to breathe and just get by.”

One afternoon, Hall remembers, he was on his way to the beach to relax. He’d parked a few hundred feet away and, halfway along the walk to the ocean, he was so tired and out of breath that he had to sit down. “I was sitting on a rock trying to catch my breath,” he says. “My weight had robbed me of seeing something I loved—the ocean. I knew I needed to make a change.”

After consulting with his doctor in July 2016, Hall underwent gastric bypass surgery. “I knew it wasn’t a quick fix—plenty of people had done it and not been successful,” he says. Days before his surgery, however, Hall made a commitment to his wife: He was going to take it seriously, he wasn’t going to cheat, and he was going to get his life back on track. “I started by grabbing a Fitbit and just walking,” he says. His goal: 10,000 steps per day, no exceptions. For six days a week, he walked as much as he could.

Once he felt acclimated to walking, he joined a gym, trying to get in 60 minutes of cardio a day. As his strength and stamina grew, he started circuit training, which led to strength training. “Now I enjoy going to the gym six days a week, and working both strength and cardio into my workouts.” Typically, Hall says, he incorporates a mix of core and balance movements, and tries to focus on at least one muscle group each day, while working his legs twice a week.

Around the same time he started exercising, he also began to work on his diet, tracking his calories and cooking mostly high protein, low carb meals. “I committed to not cheating until I reached my goal weight,” he says. The result was a dramatic 317-pound weight loss over a two year period. Losing that much weight that quickly led to some extra skin, which Hall wants to get surgery to remove. First, he’s trying to get as lean as possible.

“I’m currently at 12 percent bodyfat with about 7 to 10 pounds of skin,” he says. He keeps himself motivated with regular posts on his Instagram account, and regularly receives messages from people who are just beginning to lose weight. “A young girl messaged me recently and said her father is at a similar starting weight and having health issues,” he says. “She said my pictures and my story motivated her to get her family healthy.”

People on social media frequently ask Hall for advice, and he prefers to keep his tips simple: “Start slow—everyone is different. Incorporate things you’re willing to do the rest of your life. If you need to just start with walking and build on it, then do it. If it’s cutting out a small thing from your diet, do it. Don’t let life just happen to you. Take control.”

In the meantime, Hall has had to reintroduce himself to people who didn’t see the progress he made over the past two years. “I remember the faces people would give me when the light bulb went of that I was the same person, and that was quite rewarding. Even my wife would gasp at times and say, ‘I can’t believe how far you’ve come.’”

As a result, his confidence has soared, and he no longer worries that people think of him mainly as the “big guy.” One of the most satisfying rewards, however, came during a recent trip to Disneyland with his family. “I had spent many years waiting in line for the roller coasters—only to be denied because of my size,” he says. “It was a huge accomplishment being able to get in line this time and ride.”