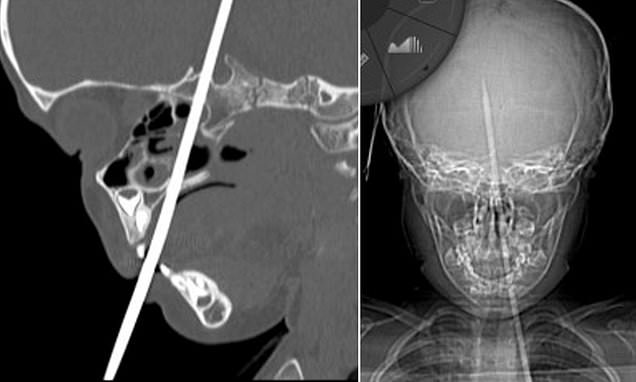 A three-year-old girl has escaped death after a knitting needle pierced through her brain.

The youngster had been pretending the giant needle was a wand while playing at her neighbour’s house.

She fell off the bed while jumping around, at which point the needle shot through her mouth and penetrated the base of her skull.

The girl, from Utah, was rushed to hospital with the needle lodged in her brain. The other end was coming out of her mouth.

Scans showed the needle had reached the centre of her brain, through the pituitary gland, which controls hormones in the body, and the thalamus, which sends signals around the brain for movement.

Despite there being ‘severe’ damage including bleeding, the unidentified girl didn’t suffer any major injuries.

She was discharged after two weeks in hospital and made a full recovery. Doctors told her tale in a medical journal, describing her as the ‘luckiest girl in the world’. 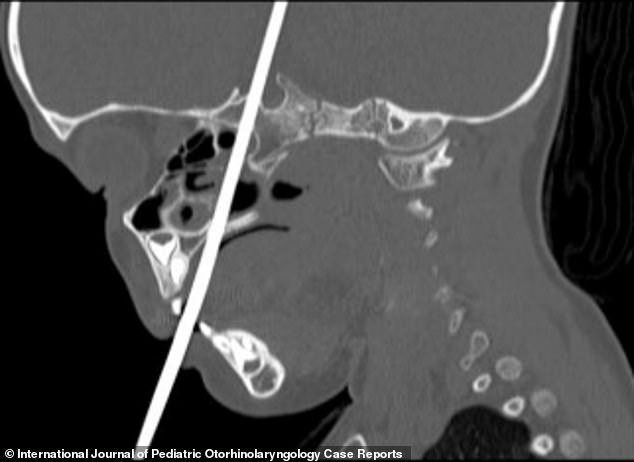 A three-year-old has been described as the ‘luckiest girl in the world’ after escaping death when a knitting needle pierced through her brain. CT image shows its path 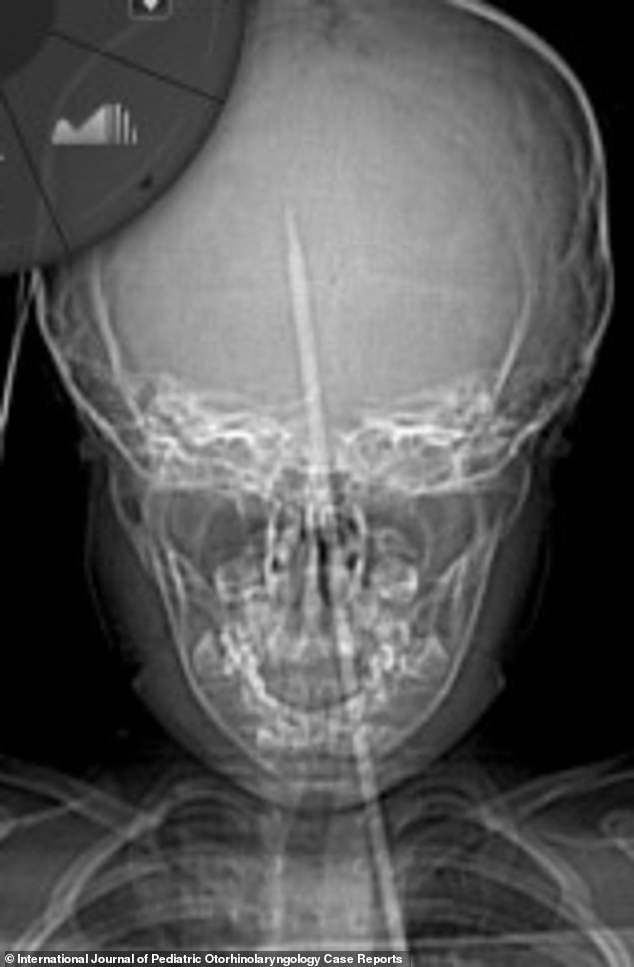 Doctors in Utah said the needle went through the bone at the back of the throat, through bone just behind the eye and into the right side of the thalamus potion of the brain (pictured)

The extremely rare case was reported by Dr Matthew Miller, of University of Utah Health, and colleagues.

Not only is a sewing needle an obscure object to cause brain injury, the path of the needle into the brain – thorough the mouth – is relatively unheard of.

A penetrating brain injury accounts for less than one per cent of all head injuries, and can be extremely difficult to manage.

Approximately 70-90 per cent of victims die before arriving at the hospital, figures from Duke University Medical Center show.

And half of those who survive to reach the hospital die there later, medics wrote in the International Journal of Pediatric Otorhinolaryngology Case Reports.

Dr Miller said: ‘Despite the severe damage caused by the knitting needle, the injury did not injure vital structures.

‘The patient was able to fully recover with proper management and an interdisciplinary approach.

‘Several other cases of penetrating injury have been documented and had positive long-term outcomes.’ 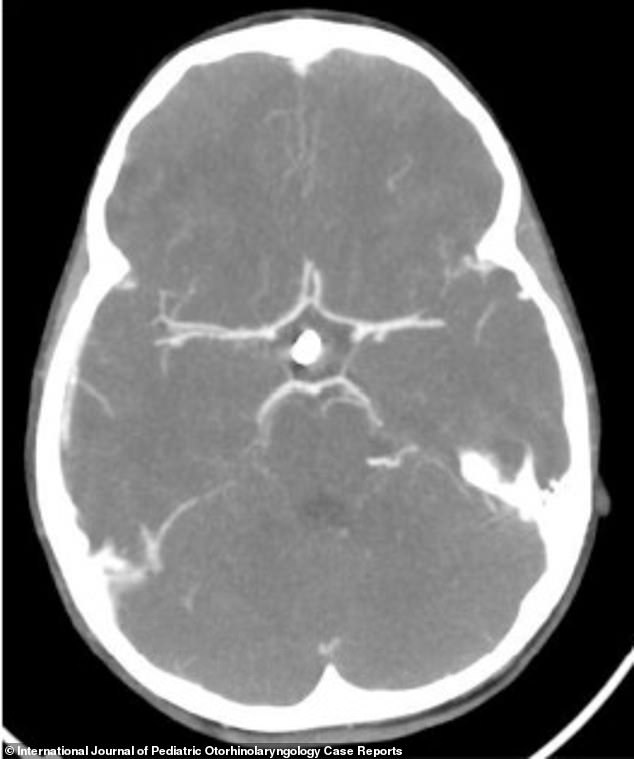 A brain scan shows how the ‘circle of willis’ – the vessels that supply blood in the brain, were not damaged

WHAT ARE THE DANGERS OF A PENETRATING BRAIN INJURY?

A penetrating brain injury is when an object enters the skull and harms the brain. It can hurt a small or large part of the brain.

The injury is a threat to life that needs emergency medical care.

Approximately 70-90 per cent of victims die before arriving at the hospital, and half of those who survive to reach the hospital die later, according to a review by Duke University Medical Center, North Carolina.

The injury could be caused by a fall, a car accident, a stab wound, a gunshot, abuse or a sports injury.

Initially treatment will be to stop  potential bleeding and a breathing tube may be placed down the throat into the lungs.

Post-traumatic epilepsy is a common manifestations either immediately or later on.

Vascular complications are among the most common and also the most devastating, doctors wrote in The Journal of Neurology & Neurophysiology.

Doctors said the needle cut through the hard bone at the back of the throat – called the palate.

It traveled through bone just behind the eyes, through the pituitary gland and the bone that protects it, and ended up in the right side of the thalamus.

A CT scan showed her brain’s tiny blood vessels were intact, at which point the girl was transferred to the paediatric department.

The needle – doctors did not specify how big it was – was removed from the girl’s mouth and the puncture wound was temporarily stuffed with gauze.

Further scans revealed haemorrhaging around the needle site. It is unclear how this was treated.

Protective brain and spinal fluid was escaping into her nose and sinuses through lacerations, which can cause side effects like a runny nose.

A drain was fitted to collect the fluid for eight days. By this time, the girl was let out of hospital and her parents were told she would need to be extra careful with her head.

During her stay in hospital, she had suffered life-threatening bacterial meningitis – but this was just a ‘minor complication’, according to the doctors.

‘Patients with severe penetrating skull base injury have a high risk of morbidity and mortality that may result from vascular damage, infection, seizure, or CSF leakage.’

One in four patients with this girl’s pituitary injury suffer with dysnatremia – an unusually high amount of sodium in the blood which can be fatal without monitoring.

Only one known case of brain injury caused by a knitting needle has been medically reported by doctors previously.