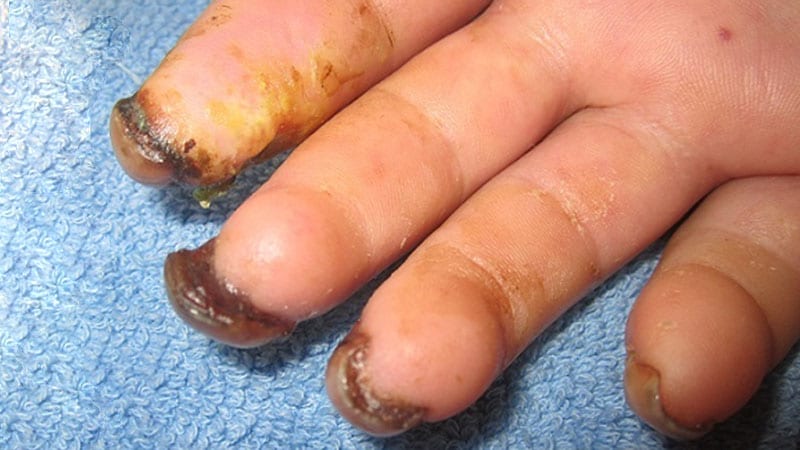 The study, published in Advances in Skin & Wound Care, is far from definitive since it’s retrospective and tracked only 45 patients. But the findings add to other research suggesting dermatologic benefits from the topical use of CBD, an ingredient in cannabis that’s widely available and doesn’t cause people to become high or become addicted.

“This is a good first step in trying to address scleroderma digital ulcer pain and healing,” University of Colorado rheumatologist Melissa Griffith, MD, said in an interview. “Digital ulcers cause great impact on quality of life, daily activities of living, and pain, so we are always looking for new, effective tools.”

Current treatments include removal of causative drugs/toxins and warmth, rest, and pain control, although “no trials exist to compare the scleroderma digital ulcer or digital ischemia treatments to each other,” Dr. Griffith said.

Therapy for vasospasm begins with calcium channel blockers such as amlodipine and nifedipine, she said, followed by phosphodiesterase type 5 inhibitors such as sildenafil or endothelin receptor antagonist medications such as bosentan. “If these fail, we use an IV option – epoprostenol. Other options are sympathectomy surgery, Botox, digital nerve blocks, biofeedback, and SSRIs,” she said. “These treatments work fairly well in most patients, but there are patients who break through these therapies and have ongoing digital ischemia, leading to digital ulcers, pain, infections, acro-osteolysis, and auto-amputation. There is definitely room to improve on our current treatment paradigm.”

For the new study, researchers in Italy led by Amelia Spinella, MD, PhD, of University Hospital of Modena, retrospectively tracked 45 patients with systemic sclerosis and at least one digital ulcer (40 women; average age, 53 years) who were treated in 2019. All patients’ ulcers were resistant to opioid therapy at the maximum tolerated dose, and all had undergone periodic iloprost infusion every 30-40 days. Based on each patient’s clinical situation, they had received calcium-channel blockers, phosphodiesterase type 5 inhibitors (sildenafil), and/or endothelin receptor antagonists (bosentan or macitentan). The researchers noted that all patients underwent surgical debridement regularly following wound bed preparation procedures and received advanced dressings (alginate, hydrocolloid, hydrofiber, hydrogel, and polyurethane foam or film). Of the 45 patients, 25 treated their wounds daily over the course of a month by administering four drops of a preparation of 10% CBD oil in acidic form and 90% hemp oil over the wound bed and perilesional skin and then covering it with a nonadhesive cloth.

No significant adverse effects were reported, although 28% of those in the CBD oil group said they had mild effects such as itch and perilesional erythema.

The authors of the new study called for larger, randomized controlled, multicenter trials to confirm the benefit of CBD topical treatment.

In recent years, researchers have devoted more attention to topical CBD as a treatment for skin conditions. While limited, the evidence suggests they “may be effective for the treatment of various inflammatory skin disorders,” researchers wrote in a 2022 report. “Although promising, additional research is necessary to evaluate efficacy and to determine dosing, safety, and long-term treatment guidelines.”

Dr. Griffith, who did not take part in the new study but is familiar with its findings, said she was especially surprised by the hint that topical CBD improves healing in addition to relieving symptoms. “I thought only pain would be affected. This is a great outcome if it can be replicated.”

As for future research, she said “there are difficulties with reproducing this at a big scale in the U.S. given CBD commercial variability. The big issue is the standardization of CBD extraction and production. It is really hard for us as physicians to know what patients are getting. Some online CBD orders contain THC [the major psychoactive ingredient of cannabis] > 0.3% or no CBD at all.”

Still, she said, “physicians and patients may consider this when standard therapies are not working or causing too many adverse effects,” especially since “the downsides here seem fairly minimal – at worst itchiness and redness that did not prevent patients from continuing in the study.”

No details about study funding were provided. The authors and Dr. Griffith report no disclosures.