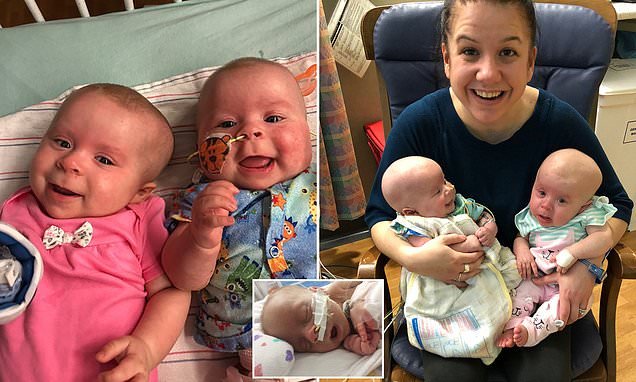 Twin baby girls, one, who were diagnosed with a rare eye cancer just DAYS after being born have battled septic shock, multiple hospital infections and A YEAR’s worth of chemo between them

A mother has revealed how her twin babies were diagnosed with a rare form of eye cancer just days after they were born.

Maryann Oakley, 39, of Pennsylvania, developed retinoblastoma herself at just six months old, which forced her to have one of her eyes removed.

When Mrs Oakley became pregnant in 2017, she underwent an amniocentesis – tests amniotic fluid for genetic or chromosomal diseases – at 16 weeks. The results revealed both twins had inherited the gene for the cancer.

After the twins Ella and Eve were born in December 2017, Ella quickly developed the classic squint and cat-eye pupil, and was diagnosed with bilateral retinoblastoma – a tumour in each eye – on January 15.

Days later, Eve stopped eating and became lethargic, with doctors discovering her bowel was twisted. After having part of her colon removed and developing septic shock, tests revealed she too had eye cancer.

After enduring 12 months of chemo between them, the girls have finished treatment for now, but their cancer could return at any time until the eye stops growing at five years old. 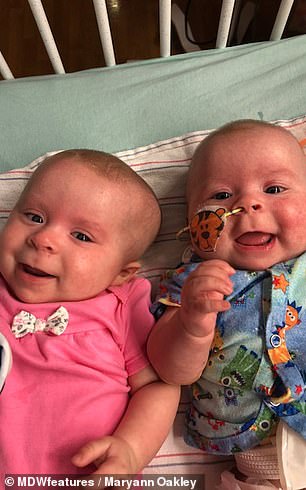 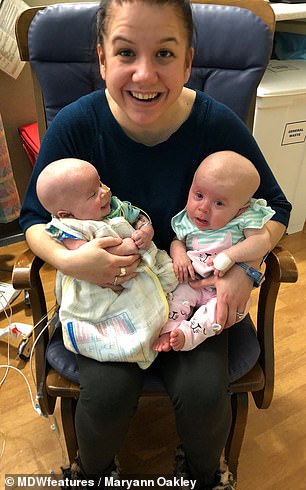 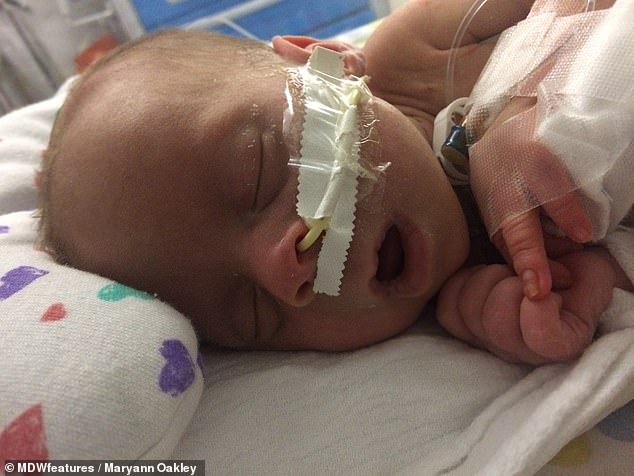 Eve was diagnosed after she was rushed to hospital at ten days old when she became lethargic. She had a twisted bowel, with tests then revealing her cancer. She is pictured in intensive care after developing septic shock from surgery to remove part of her colon

Speaking of her own cancer ordeal, Mrs Oakley – who wears a prosthetic eye – said: ‘I had bilateral retinoblastoma shortly after birth; I was diagnosed at six months.

‘My mum noticed a white cloud within my eyes and immediately took me to see a doctor.

‘I received laser therapy, no chemotherapy; my right eye had to be removed. No other member of my family had retinoblastoma, it was spontaneous.

‘So, I knew there would be a chance that I could pass this onto our children.’

Desperate to become parents, Mrs Oakley and her husband Nathan Oakley decided to start a family despite the risk, but soon learned both of their unborn babies inherited their mother’s cancer gene.

Although Ella was quickly diagnosed with eye cancer, doctors only discovered Eve also had the condition when she was rushed to Penn State Children’s Hospital on New Year’s Day last year.

‘It was only ten days of being home Eve stopped eating and was showing signs of lethargy,’ Mrs Oakley said. ‘We took her to hospital, where they did exploratory surgery and located the severely twisted bowel.’

At just one-month-old, Eve was forced to endure surgery to remove a portion of her large intestine, leaving her with a stoma bag, according to her parents’ GoFundMe page. This was set up to help them make ends meet during the difficult time.

Due to the ‘intense abdominal surgery’, Eve developed septic shock and spent ten days in a critical condition on life support.

As if that was not traumatic enough, the youngster was then diagnosed with cancer.

‘Shortly after, her eyes were examined and a tumour was found,’ Mrs Oakley said. ‘Everything was happening so fast. Every day we kept getting horrible news about our twins.

‘There were no breaks and hardly time to breathe. This went on for months and I just kept clinging onto hope everything would be okay.’ 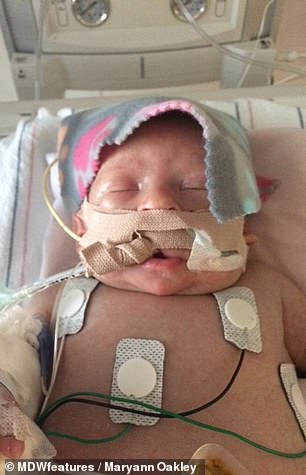 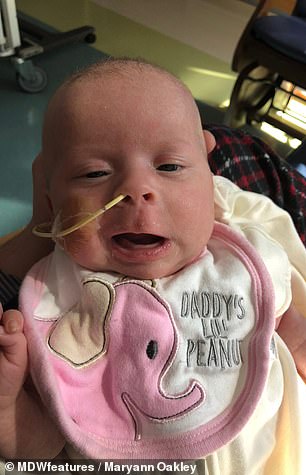 Doctors were initially unaware what was causing Eve’s lethargy until exploratory surgery revealed her twisted bowel. She is pictured left after the operation and right in hospital 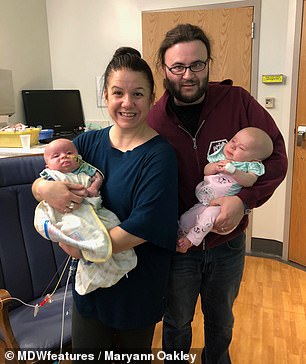 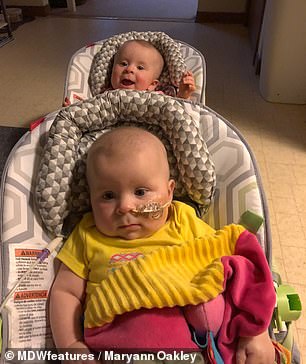 Mrs Oakley and her husband Nathan are pictured left with the twins. She said their world has been ‘turned upside down’, with Mrs Oakley ‘carrying guilt’ that she passed her cancer gene on. The twins (right) have finished chemo for now but the disease could return at any time

Once diagnosed, both girls were immediately started on a course of chemo.

Eve has faced the most complications, including three infections she caught while fighting for her life in hospital.

‘Our world was turned upside down,’ Mrs Oakley said. ‘We had no idea whether Eve would survive or not and both children needed to endure chemotherapy.

‘All of this happened shortly after birth, so we were never really able to enjoy them just being at home and healthy.

‘Multiple holidays were spent apart as Eve was two hours away inpatient and someone needed to be at home with little Ella.’

‘Not knowing what was going to take place, we were terrified. I also carried a lot of guilt that this had happened to these two wonderful and beautiful babies.

‘Having to see your child go through chemotherapy is so difficult. No one wants to see their new-born baby so sick or suffer. Handing off your child to a nurse for constant anaesthesia or procedures is something we will never forget.’ 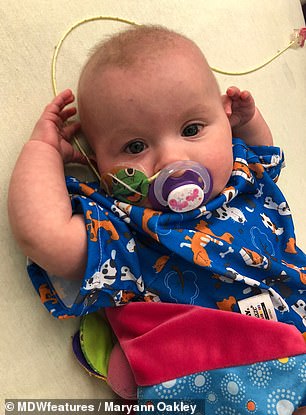 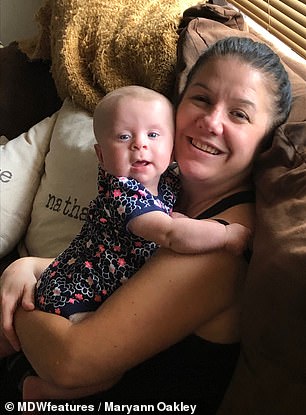 Eve – who has suffered the brunt of the complications – is pictured left receiving anaesthesia before one of her many operations. Ella (pictured right at home with her mother) was diagnosed with eye cancer first and has also endured six months of chemo 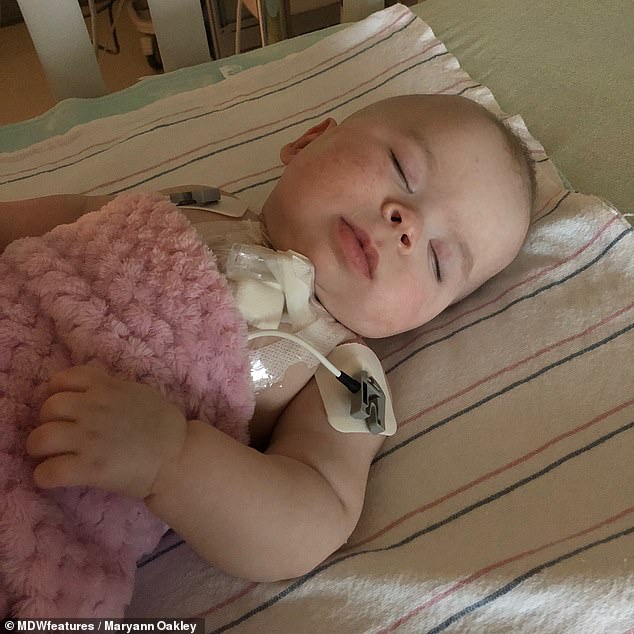 While the twins have finished chemo for now, Mrs Oakley is aware the ordeal is far from over.

‘Retinoblastoma does not just go away with treatment,’ she said. ‘The eyes grow until they are five-years-old. So, the treatment and follow ups are ongoing.

‘Honestly, some days are wonderful and some days are quite tough. There is a lot of anxiety not knowing what the future holds for these two.

While battling cancer, Eve was also diagnosed with auditory neuropathy – a hearing disorder where the inner ear detects sound but cannot send the information to the brain.

‘I worry a lot about Eve,’ Mrs Oakley said. ‘Will she have further intestine issues? Will she be able to hear laughter, music, her sister talking to her, or mummy and daddy reading to her?

‘I wish I could say it gets easier. It is so hard to see a child suffer.

‘Not knowing how this will turn out was so petrifying and also having no control of the outcome is overwhelming in itself.’ 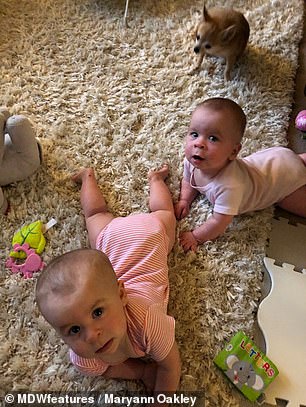 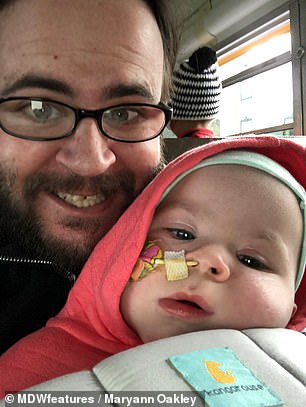 The ordeal is far from over, with retinoblastoma being a risk until the eyes stop growing at five years old. For now the twins (left) are home but have regular hospital check ups. Eve is pictured right with her father. She nearly died after developing three infections in hospital

Although family and friends have been supportive, Mrs Oakley has also gotten a lot of strength through sharing her story online.

‘When word started to spread that they were sick, we decided to post updates on social media so that others could receive updates on the twins,’ she said.

‘We are surrounded with love and support. All comments have been positive. These comments have really helped us along this journey.

‘While family and friends are very supportive and full of love, I still find times where I feel alone. I have found that using social media support groups has really helped me.

‘Retinoblastoma is quite rare, and it is nice to be able to reach out to others who are in a similar situation. We make sure to enjoy every single moment with them. I hang on to hope. Hope is what got our family through all of this.’

While juggling her daughters’ surgeries, chemo and hospital appointments, Mrs Oakley has been unable to return to work, while Mr Oakley has cut his hours down to part time. They have set up a fundraising page here.

Retinoblastoma is a rare type of eye cancer that usually affects children under the age of five.

As it is usually caught early in the UK, 98 per cent of children with the disease are successfully treated.

About 50 children develop the condition every year in Britain.

It affects up to 300 youngsters annually in the US.

Retinoblastoma is specifically a cancer of the retina, which is the light-sensitive lining at the back of the eye.

It can affect one or both eyes.

A fault gene is responsible in about 40 per cent of cases. This can be inherited from the sufferer’s parents or may occur spontaneously.

The most common symptoms are the pupil looking like a cat’s eye and the child developing a squint.

The cat eye look is most commonly seen in photos.

Small tumours can usually be treated with laser or freezing treatment.