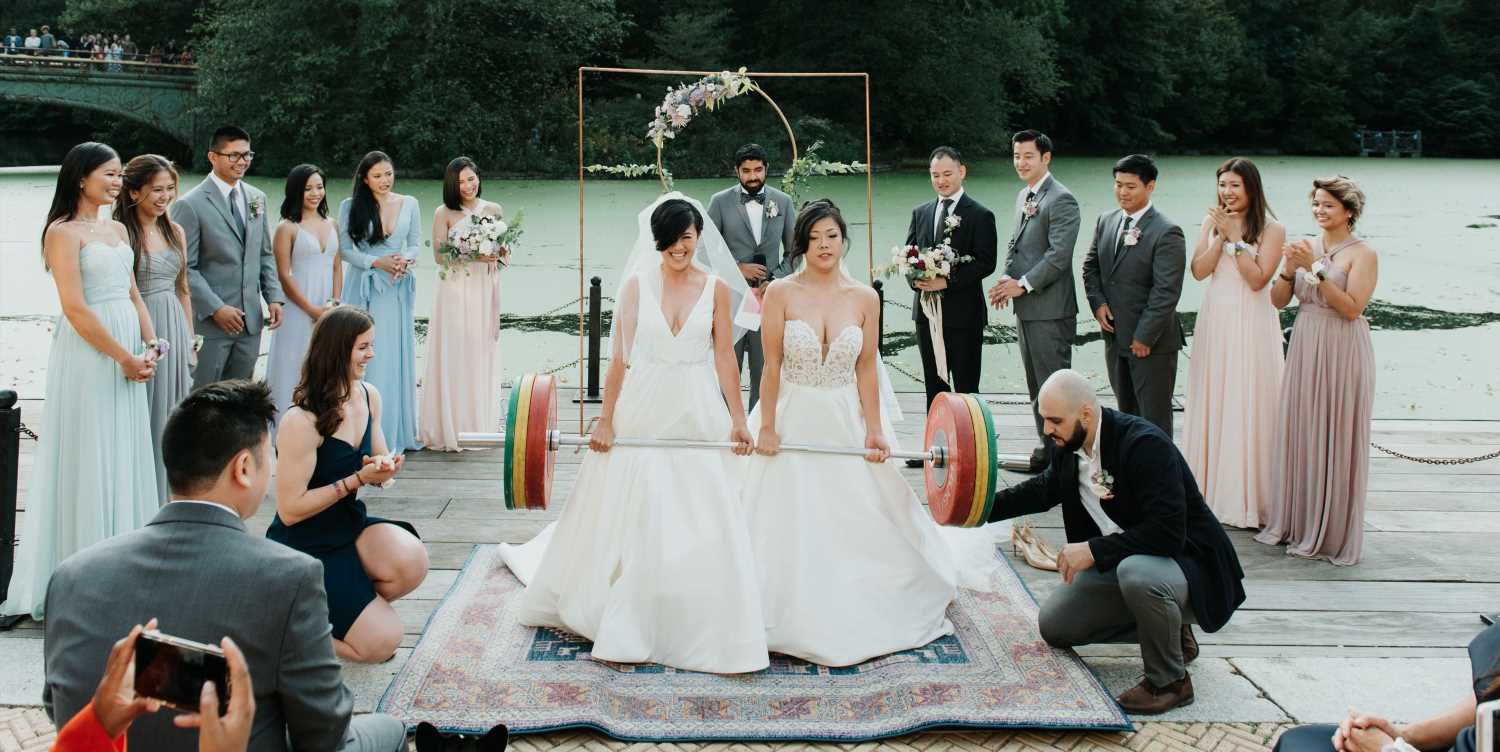 Vows. Rings. Deadlift. That was roughly the order of the wedding ceremony for two brides, Lisa Yang and Wek Hernandez. The newlyweds completed a tandem deadlift mid-ceremony and raised the bar for weddings everywhere.

Both brides wore beautiful white wedding gowns for the lift. Together, they stood on a rug in front of their guests, grabbed hold of the barbell, and lifted it in unison in the middle of Brooklyn’s Prospect Park. They stood tall and held it long enough for their photographer, Eileen Meny, to capture the moment and repeated the lift a total of three times. NBD, since the plates and the bar weighed in at 253 pounds, which each usually lifts solo.

These brides steered clear from the usual matrimonial traditions and opted for something totally unique instead. “We thought about the usual candle lighting, tree planting, sand pouring, and none of those things represented Wek and I,” Yang tells Women’s Health. “We were joking about doing a tandem deadlift. At the time, it seemed ridiculous because we’re Olympic weightlifters, deadlift isn’t even our main sport. But a snatch or clean and jerk in dresses might be a bit dangerous, so we settled on three deadlifts.”

The unconventional unity ceremony was a perfect fit for the couple. Hernandez adds: “It was meant to not only be a symbol of unity but also a statement: ‘Individually, we are strong, capable women, but together we are stronger.'” ‘Til deadlift do us part, right?

Fitness is a big part of their relationship. “We’ve trained at least three days a week for the past two to three years,” explains Yang. “Wek even shared a platform with Morghan King!” Hernandez is a physical therapist, and she introduced Yang to Crossfit. Then, when Yang transitioned into weightlifting, Hernandez eventually joined in, too.

Wanna perfect your own deadlift? Here’s what you need to know:

Weightlifting sessions became date nights for the fit couple. “Weightlifting to us is very special,” Hernandez says. “We lift with our local team in Brooklyn. They’re family to us, and the whole weightlifting team was at our wedding.”

If you take a close look at their wedding party, nobody looks too surprised by the deadlift. “I think some were shocked?” Hernandez says. “Seeing our photos while lifting, one of our bridesmaids seemed repulsed?”

The guests’ reactions aren’t what stand out for the newlyweds, though. “I was just so happy and in the moment!” she continues. “I mean, we were deadlifting in Prospect Park in wedding gowns professing our love. It was awesome!”

They hope their memorable moment can inspire others, too. Yang says, “People get really intimidated by barbells, but if they see tiny Asians in wedding dresses lifting weights, maybe they can start to believe that anything is possible.”