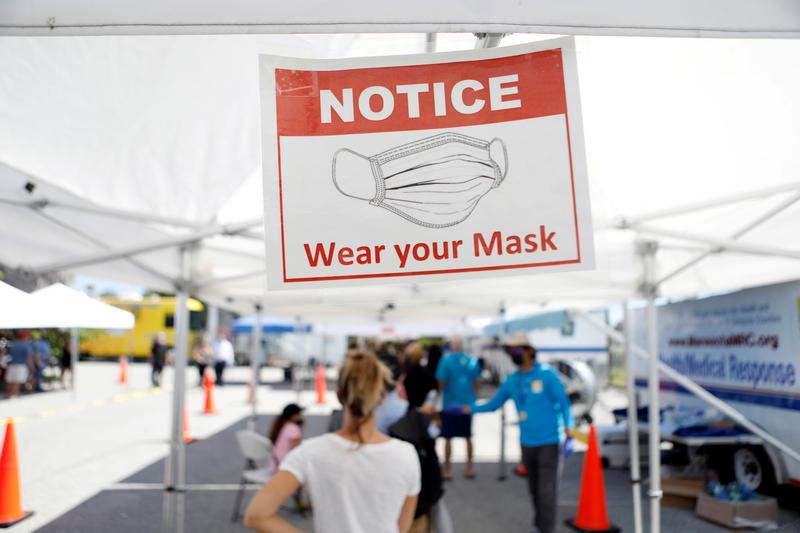 NEW YORK (Reuters) – The number of new COVID-19 cases climbed to a six-month high in the United States, with more than 100,000 infections reported on Wednesday as the Delta variant ravages Florida and other states with lower vaccination rates.

The seven-day average of new reported cases reached nearly 95,000, a five-fold increase in less than a month, Reuters data showed. The figure provides the most accurate picture of how fast cases are rising since some states only report infections once a week or only on weekdays. (Graphic on U.S. cases and deaths) tmsnrt.rs/2WTOZDR

“We’re seeing terrifying #COVID19 trends in our hospitals,” County Judge Lina Hidalgo wrote on Twitter. She is the top official of Harris County, the most populous county in Texas and home to the city of Houston. “At this point if you’re unvaccinated by choice, you’re complicit in this crisis.”

A day earlier he warned that cases could double to 200,000 per day due to the variant in the coming weeks.

The United States is joining Germany, France and Israel in giving booster shots despite a plea by the World Health Organisation to hold off until more people around the world can get their first shot.

Florida, which has emerged as the nationwide hotbed of new infections, set yet another grim hospitalization record on Thursday with 12,373 beds occupied by confirmed COVID-19 patients, according to data from the U.S. Department of Health and Human Services (HHS). More children are hospitalized with the virus in Florida than in any other U.S. state.

Louisiana and Arkansas are also grappling with record or near-record numbers of coronavirus patients occupying beds, according to a Reuters tally.

Elsewhere, Virginia on Thursday became the third state after California and New York to mandate vaccines or weekly testing for all state employees. Vaccinations are required only for some government employees in New Jersey.

Amazon.com, which had originally set Sept. 7 as the comeback date, on Thursday said it would not expect U.S. corporate employees to return to the office until next year, according to an internal note seen by Reuters.