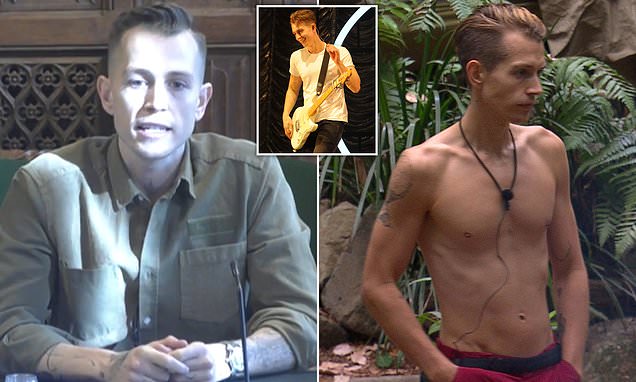 Vamps guitarist James Brittain-McVey today revealed that his stint on ITV’s I’m A Celebrity Get Me Out Of Here worsened his anorexia.

But he claimed the dramatic weight loss, which left fans concerned about his thin frame, made his model wife Kirstie ‘scared’ about how ‘ill’ he looked.

Mr Brittain-Mcvey, who thought he had ‘solved mental health’ before going into the jungle, admitted that he still had ‘unanswered demons in my head about my body’ when he appeared on the show.

He has battled anorexia ever since he was 14 and underwent liposuction at just 19, despite having just six per cent body fat.

Giving evidence during a Health and Social Care Select Committee into the impact of body image on physical and mental health, he said: ‘That show was brilliant for an array of reasons but it made me focus on myself more than ever, physically.’

The guitarist-turned-body rights campaigner said he felt ‘extremely confident’ going into the show, appearing alongside contestants such as eventual ‘King of the Jungle’ Harry Redknapp and Noel Edmonds.

However, brand deals in the wake of his appearance tricked him into thinking he had to keep himself at an unhealthy weight afterwards.

The musician, who blamed social media for allowing him to fall into the ‘rabbit hole’, also claimed he still feels pressure to look a ‘certain way’. 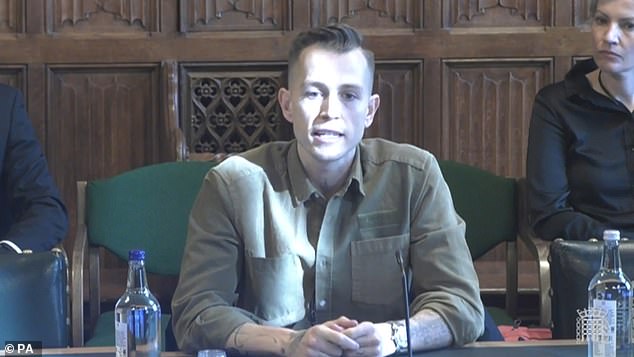 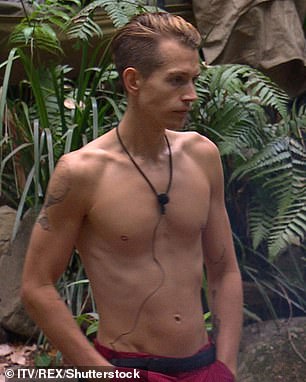 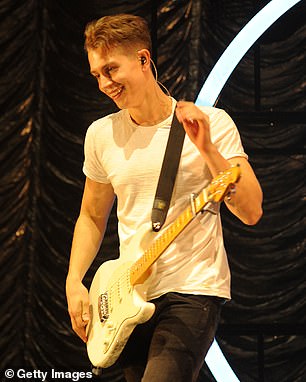 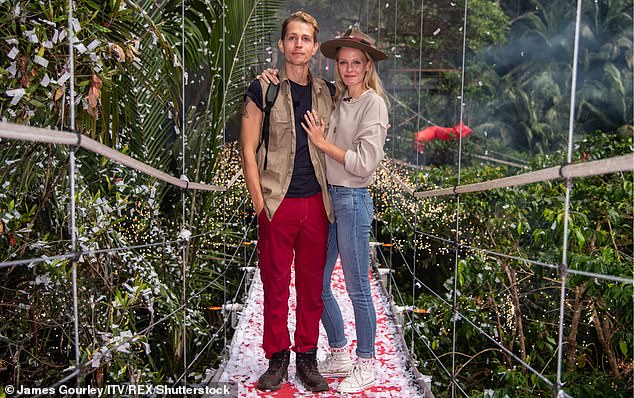 The dramatic weight loss left his model wife Kirstie Brittain-McVey (pictured together after he left the Jungle) feeling ‘scared’ and led to his old demons resurfacing for the first time in 10 years, he said 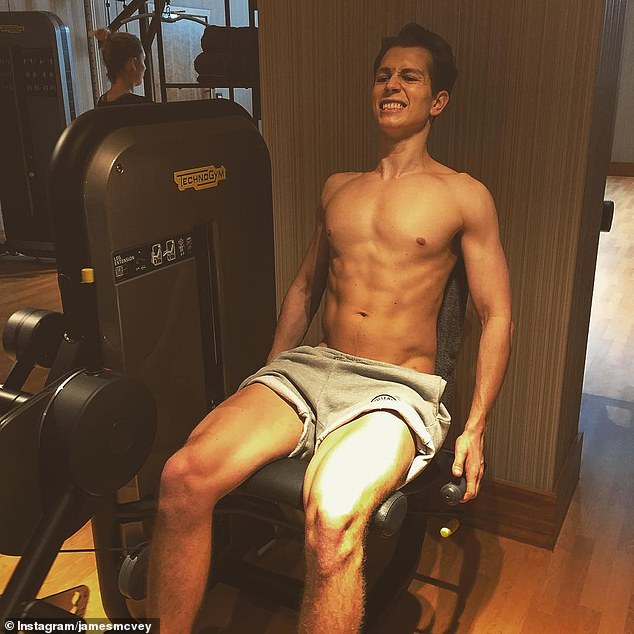 Mr Brittain-McVey (pictured in 2014), 27, first started to have issues with his body image in his late teens, he said. The first thing he would think about in the morning is whether he was able to eat a certain food or if he would be able to go to the gym

Anorexia is a serious mental illness where a person restricts their food intake, which often causes them to be severely underweight.

Some sufferers may experience periods of bingeing, followed by purging.

Sufferers often have a distorted view of themselves and think they are larger than they really are.

Untreated, patients can suffer loss of muscle and bone strength, as well as depression, low libido and menstruation ceasing in women.

Behavioural signs of anorexia include people saying they have already eaten or will do later, as well as counting calories, missing meals, hiding food and eating slowly.

As well as weight loss, sufferers may experience insomnia, constipation, bloating, feeling cold, hair loss, and swelling of the hands, face and feet.

Speaking about his time on I’m A Celeb, he told MPs: ‘I went into that show feeling extremely confident.

‘I came out of that show 5/6kg lighter and when my wife saw me, she was shocked, almost scared by how ill I looked.

‘However, I thought immediately I kind of looked good again.

‘I had a six-pack in a way that I hadn’t for 10 years, since the beginning of my issues with food and mental health.

‘And I think without realising, I still had unanswered demons in my head about my body.’

He said he felt brand deals he received after the show — which were not named — came because of the fact he looked leaner than ever.

And that pressure caused him to keep starving himself for years after finishing the show.

Mr Brittain-McVey first started to have issues with his body image as a 14-year-old.

He told MPs: ‘At that time there was a big fashion trend of these big American surf style companies that came over and indoctrinated many of the youth in the UK to adhere to a certain body physique, live a certain life.

‘I had one of their shopping bags in my bedroom of a guy ripped on a beach in Malibu and I think unconsciously every morning I would think that is what I need to look like.

‘I think social media encouraged me to fall further down that rabbit hole.’

Mr Brittain-McVey revealed the first thing he would think about in the morning was whether he was able to eat a certain food or if he would be able to go to the gym.

By the time he went into the jungle he thought he had ‘solved mental health, which later I’ve obviously realised isn’t how it works’.

He said: ‘One of the biggest misconceptions in my opinion is people presuming this is a stride for vanity, that wasn’t what it was.

‘I think there was a degree of self-destruction within my mind about how I look, and the pressure to conform to those stereotypes and gender constructs and before I realised, my whole life was controlled by this chase to look a certain way.

‘You’re never satisfied. You think you get to a certain point and you will complete it but there is always another thing you can do or another supplement you can take and at the age of 19 the next step for me was to get on liposuction.’

Mr Brittain-McVey added: ‘Even though I have had 15 years in this world, I still feel a pressure to look a certain way and that’s why I worry for a lot of our fan base.

‘How on earth are they meant to feel comfortable within their skin if you go on these apps where you’re constantly scrolling you see another person that looks a certain way.

‘I worry about the future generations and that’s why I think we need to clamp down on what we view to be acceptable in advertisement.

‘We need to have a transparency where the models we see are bodies that represent society and not this small demographic that is completely unachievable.

‘I would love to see a world where companies represent the majority and not the small majority of unachievable body image.’

Mr Brittain-McVey has previously spoken out about his issues with body image, although he never mentioned the effect of appearing on I’m A Celebrity.

He said being on tour with The Vamps led to him ‘seizing the only thing he had control of’, which was his body.

The guitarist said his wife, who he married in 2020, helped him confront his problems, and he hopes speaking out can help other men suffering with anorexia.

MPs are currently holding an inquiry into how people’s perception of their body image affects their physical and mental health.

The Health and Social Care Committee will explore how it draws people to want cosmetic procedures.