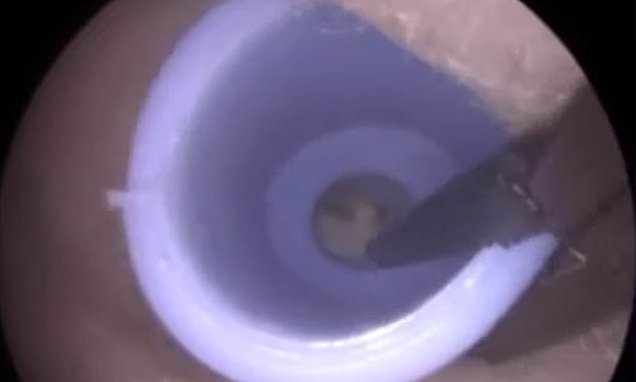 This is the stomach-churning moment a man has part of a DIY ear wax removal kit extracted from his ear for the second time in three months.

An audiologist pulled the blue 2cm-long rubber tip out using a miniature pair of pliers, after it became lodged in the patient’s ear canal.

Once removed, he scooped up a big chunk of ear wax and dead skin that had been stuck behind it and pressed against the man’s ear drum. 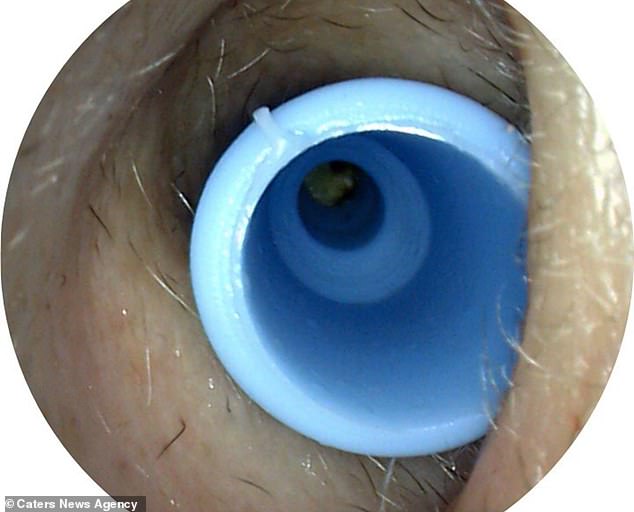 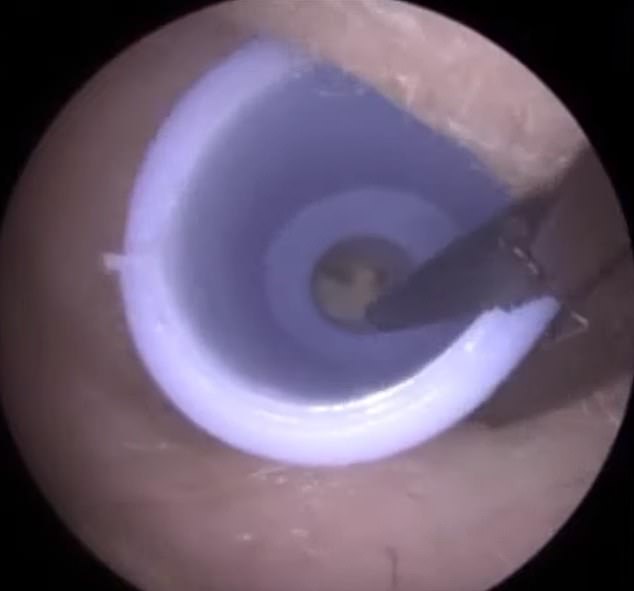 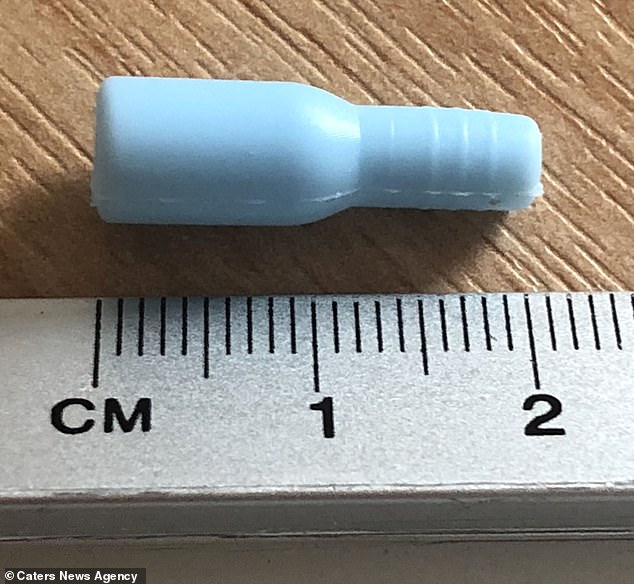 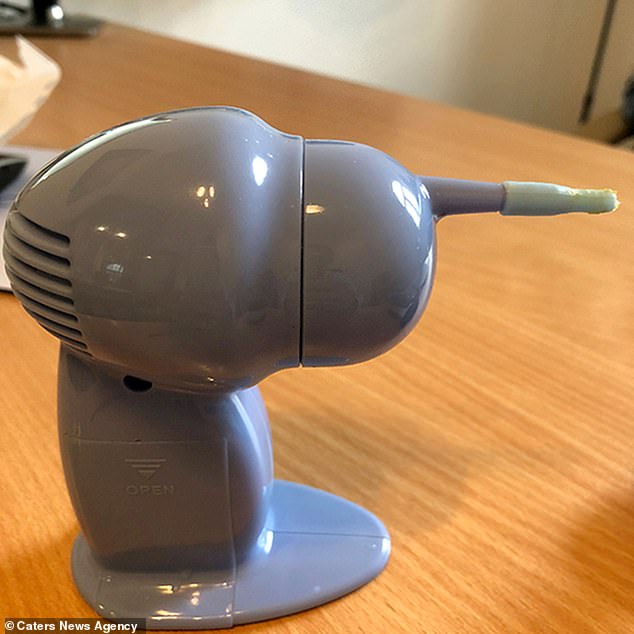 The procedure was performed via an endoscope, which allowed Neel Raithatha to examine inside the patient’s inner ear cavity.

The patient turned up at his clinic in Leicester on June 26 after the removal kit got lodged in his ear – despite having the same procedure just three months prior.

He had been using a miniature vacuum cleaner kit – designed to suck the ear wax out – at home.

Mr Raithatha, who has 43,000 subscribers on YouTube and is known as the Wax Whisperer, said both he and his client were ‘in complete shock’.

He said: ‘The client attended with a rubber tip, from a DIY ear vacuum device, lodged inside his left ear canal.

‘Despite my audiological advice, the client had continued to use the DIY ear vacuum device.

‘I extracted the rubber tip using forceps. Ironically, the rubber tip had further impacted ear wax and dead skin into his ear canal and against the eardrum.’

It comes after health officials declared in November 2017 that cotton buds should not be used to clean ears. 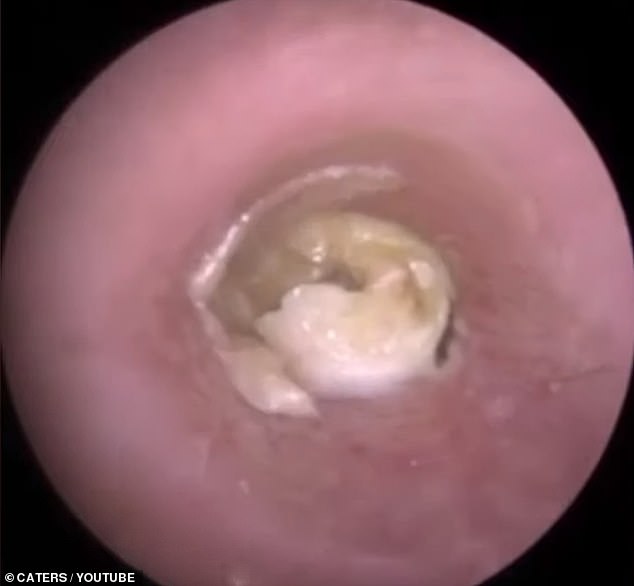 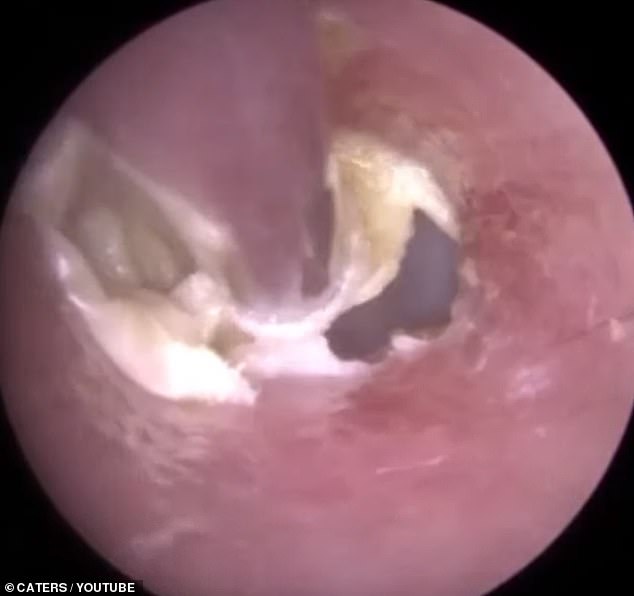 Mr Raithatha then scooped up the remaining wax with a suction cup, before scrapping any residue in the patient’s ear

Inserting a bud could damage the ear and push wax further down, according to the National Institute for Health and Care Excellence.

The draft guidance also said ear syringing, in which a metal syringe is used to pump water manually into the ear to clear out wax, is potentially harmful.

Committee members agreed that buds may be a ‘hazard’ that can cause infections or push wax further into the ear canal.

The guideline said the ear canal is ‘self-cleaning’, with excess wax falling out on its own, and that the entrance to the ears can be cleaned with a damp flannel.

WHAT IS EARWAX BUILD UP?

Earwax usually falls out on its own but, in some cases, it can become blocked.

It cannot be prevented as the wax is there to protect ears from water, dirt germs, infection and foreign bodies.

You are more likely to suffer buildup if:

You can try using over-the-counter wax softening drops or warm water to irrigate your ears.

If this doesn’t work, seek professional medical help in case of infection.