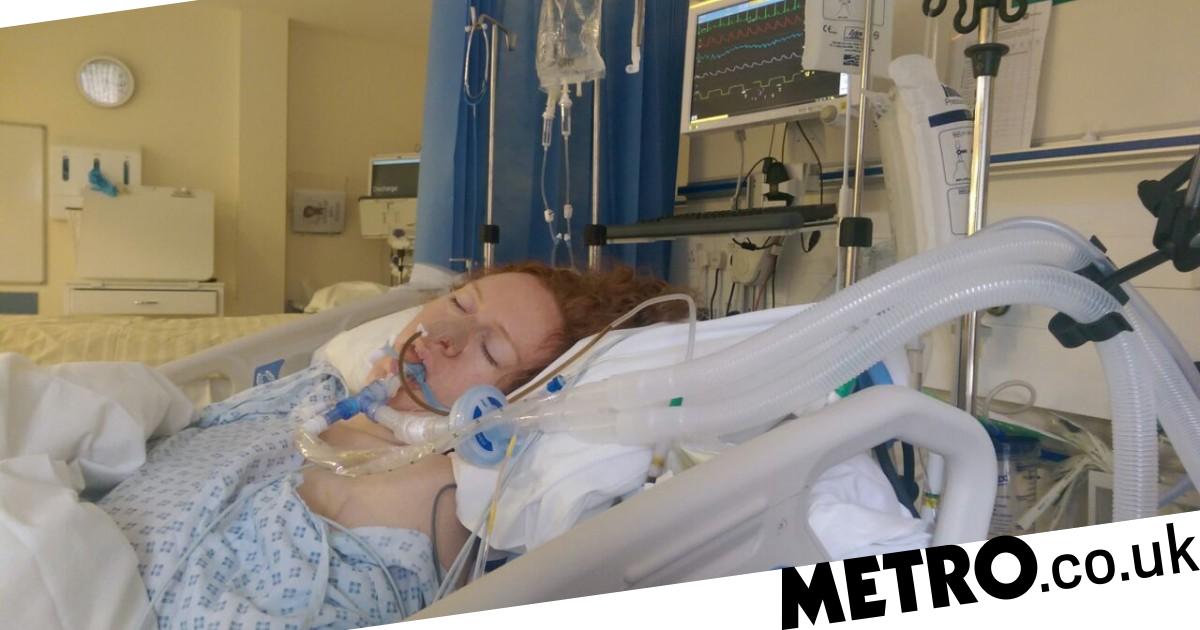 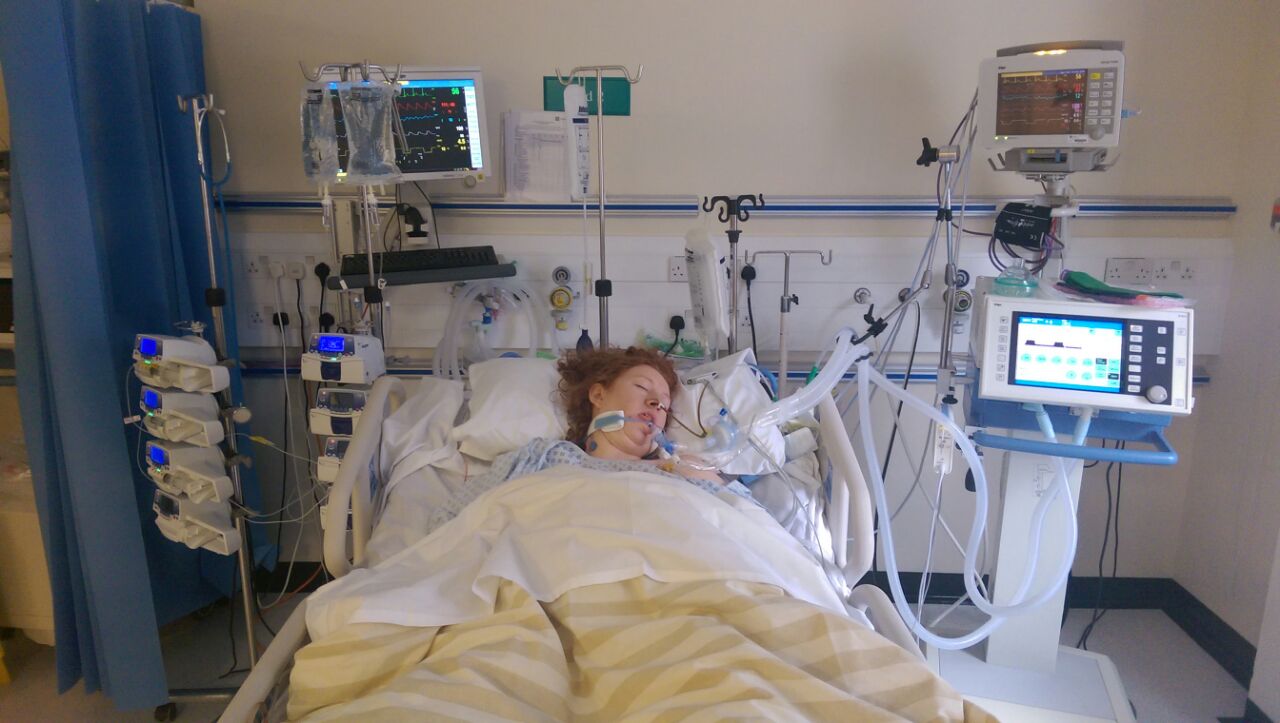 Deep in the Borneo rainforest, I was overcome with agonising stomach pains.

This was 2013, and I was on my honeymoon. In the months prior, I had visited the doctor about my stomach pains and was told it could be anything from my age, to hormones, to IBS — but nothing was done.

So as I curled up on my hotel bed, I vowed to see a specialist as soon as we got home.

When we got back to London, I went to the hospital.

There the pain got worse and after ultrasounds and a CT scan I was given pethidine (an opioid analgesic) and admitted.

A consultant explained that they thought I had an ovarian cyst and that they would need to operate to remove it.

I was shocked but it all happened so fast — I had surgery the next day. Afterwards the doctor explained that it was actually a benign tumour and it measured 16x17cm: the size of a pineapple.

They believed it had originated from my appendix and that it had burst, causing the cells to spread around the abdomen.

I struggled to take it all in; I was of course shocked, but there was a sense of satisfaction as I felt it explained why I’d been suffering for so long. Further surgery was scheduled for eight weeks later to remove my appendix and part of my bowel.

Beforehand the doctor explained that although the tumour wasn’t cancerous in the sense that it doesn’t tend to metastasise to the bones, blood or brain, it did release cells that produce mucin – a jelly like substance. It spreads amongst the abdomen and occasionally the lungs. It could stick to and hide amongst organs and would keep growing until I died or it was removed.

Mentally, it was tough. I thought I was going to die and I felt very low and depressed.

The specialist, Mr Moran, explained that I had pseudomyxoma peritonei.

I had never heard of the condition, let alone be able to pronounce it!

He explained that pseudomyxoma peritonei (PMP) is a rare cancer that is believed to affect just one in a million people and usually starts in the appendix.

It’s normally slow-growing and eventually the cancer spreads into the space inside the abdominal cavity.

No one told me what my chances of survival were. It was a case of having the surgery and chemo and hoping that it worked, or dying painfully with my organs being crushed from the inside.

The treatment would involve removing several organs and receiving a type of heated chemotherapy, but we could watch and wait for it to get worse before operating.

This would mean having regular CT scans and blood tests to monitor growth of tumours and increase in tumour markers.

I felt somewhat relieved and pleased – I could freeze embryos, so my option of having children wasn’t entirely removed from me.

My husband and I both wanted children but neither of us had expected to think about it so soon. I was 33 and newly married. However, I was really anxious about big, life changing surgery, so I felt relieved to have been given some time to carry on with life as ‘normal’.

I hadn’t realised how long fertility treatment would take.

I met the fertility specialist in August 2013 — seven months after my diagnosis — and we had our first round the following March, which resulted in five embryos being frozen.

By the end of November 2014, scans showed there were tumours on my spleen, the lining of my diaphragm, my liver, my omentum, my ovaries and the lining of my abdomen/pelvis. When I received this news, I didn’t feel surprised but I was disappointed. I knew it meant big surgery sooner rather than later.

We decided to have another round of IVF. Embryo transfer is a numbers game, so we wanted as many in the freezer as we could get. This resulted in three more embryos being frozen.

I underwent surgery in April 2015 to remove my ovaries and fallopian tubes, greater and lesser omentum, spleen, gallbladder, part of my liver, diaphragm stripped and peritoneum – nine organs in total!

The next day I was given chemo that sat in my abdomen for 24 hours. They were the worst 24 hours of my life. I felt like I was dying – I couldn’t really see or speak – the pain seemed to be telling me that although I’d managed to survive the surgery, the chemo was going to finish me off.

My vitals went haywire and I spent 11 days in an intensive care unit. It was six weeks before I was home for good.

I went on six months’ sick leave from my job and my strength was completely zapped.

I had to get used to how different life was without so many organs too. Without a gallbladder I couldn’t tolerate dairy and high fat foods. I needed HRT because having my ovaries removed put me into early menopause.

It was a lot to take on board but I felt so lucky to be alive that I just took one day at a time.

A year after my surgery, scans and blood tests showed there was no evidence of disease.

This was repeated a year later. In November 2017 I had one of my frozen embryos transferred. When it came to the thought of having a baby, I was excited and hopeful.

At the time, it didn’t occur to me that pregnancy would take a toll on my body – but having a baby was something we had waited a long time for and we were just so pleased we could try to have one.

No one knew what my chances were of getting pregnant so we tried to stay positive.

We were delighted when I fell pregnant but I suffered from hyperemesis gravidarum until my 18th week, and then from severe swelling because all my abdominal lymph nodes had been removed. I had to wear compression stockings, keep my legs elevated and inject blood thinners.

Then I contracted an infection, which caused me to give birth to our daughter nearly two months early, in June 2018.

It certainly wasn’t plain sailing but beating such a rare cancer and becoming a mum was something I never dared to imagine possible five years earlier. So on my darkest days, I try to remember that.

I’ve started volunteering for a charity called Pseudomyxoma Survivor and I gain strength from hearing about people who have survived for years after having an operation like mine.

The other day, I sat on the side of the pool and watched as my three-year-old daughter, Jasmine, jumped into the water for her first swimming lesson.

She came up with a huge smile on her face, fearless and happy, and I felt so incredibly lucky – not just to be a mum, but also that I was here to witness such a precious moment.

I don’t know what the future holds but I’ll continue to be monitored regularly and to make the most of every precious moment with my husband and daughter.

As told to Rachel Tompkins