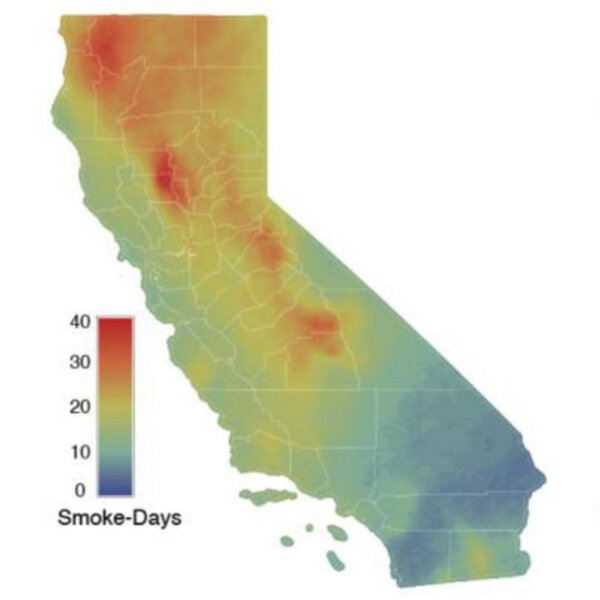 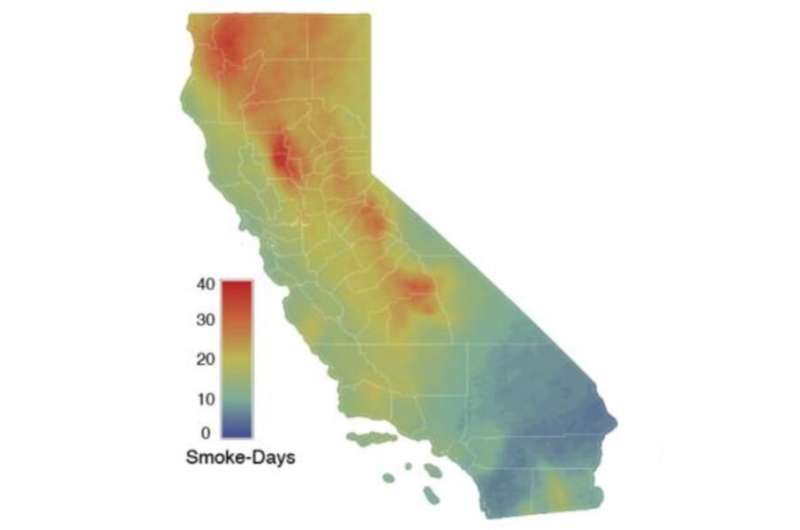 Exposure to wildfire smoke during pregnancy increases the risk that a baby will be born too early, a new Stanford University study suggests.

The study, published Aug. 14 in Environmental Research, finds there may have been as many as 7,000 extra preterm births in California attributable to wildfire smoke exposure between 2007 and 2012. These births occurred before 37 weeks of pregnancy when incomplete development heightens risk of various neurodevelopmental, gastrointestinal and respiratory complications, and even death.

Wildfire smoke contains high levels of the smallest and deadliest type of particle pollution, known as PM 2.5. These specks of toxic soot, or particulate matter, are so fine they can embed deep in the lungs and pass into the bloodstream, just like the oxygen molecules we need to survive.

The research comes as massive wildfires are again blazing through parched landscapes in the western U.S.—just a year after a historic wildfire season torched more than 4 million acres of California and produced some of the worst daily air pollution ever recorded in the state. During the 2020 fire season, more than half of the state’s population experienced a month of wildfire smoke levels in the range of unhealthy to hazardous.

This year could be worse, said Stanford environmental economist Marshall Burke, a co-author of the new study. And yet much remains unknown about the health impacts of these noxious plumes, which contribute a growing portion of fine particle pollution nationwide and have a different chemical makeup from other ambient sources of PM 2.5, such as agriculture, tailpipe emissions and industry.

One possible explanation for the link between wildfire smoke exposure and preterm birth, the authors say, is that the pollution may trigger an inflammatory response, which then sets delivery in motion. The increase in risk is relatively small in the context of all the factors that contribute to the birth of a healthy, full-term baby. “However, against a backdrop where we know so little about why some women deliver too soon, prematurely, and why others do not, finding clues like the one here helps us start piecing the bigger puzzle together,” said co-author Gary Shaw, DrPH, a professor of pediatrics and co-primary investigator of Stanford’s March of Dimes Prematurity Research Center.

The new results show wildfire smoke may have contributed to more than 6 percent of preterm births in California in the worst smoke year of the study period, 2008, when a severe lightning storm, powerful winds, high temperatures and a parched landscape combined for a deadly and destructive fire season—one that has now been dwarfed by the record-setting infernos of 2020 and ongoing blazes like the Dixie fire in Northern California.

“In the future, we expect to see more frequent and intense exposure to wildfire smoke throughout the West due to a confluence of factors, including climate change, a century of fire suppression and construction of more homes along the fire-prone fringes of forests, scrublands and grasslands. As a result, the health burden from smoke exposure—including preterm births—is likely to increase,” said lead author Sam Heft-Neal, a research scholar at Stanford’s Center on Food Security and the Environment.

The research provides new evidence for the value of investing in prescribed burns, mechanical thinning, or other efforts to reduce the risk of extreme wildfires. Given that premature births cost the U.S. healthcare system an estimated $25 billion per year, even modest reductions in preterm birth risk could yield “enormous societal benefits,” said Burke, an associate professor of Earth system science at Stanford’s School of Earth, Energy & Environmental Sciences (Stanford Earth). “Our research highlights that reducing wildfire risk and the air pollution that accompanies it is one way of achieving these societal benefits.”

‘No safe level of exposure’

The researchers analyzed satellite data of smoke plumes from the National Oceanic and Atmospheric Administration (NOAA) to identify smoke days for each of 2,610 zip codes. They paired these data with estimates of ground-level PM 2.5 pollution, which were developed using a machine learning algorithm that incorporates data from air quality sensors, satellite observations and computer models of how chemicals move through Earth’s atmosphere. They pulled additional data from California birth records, excluding twins, triplets and higher multiples, which commonly arrive early.

After accounting for other factors known to influence preterm birth risk, such as temperature, baseline pollution exposure and the mother’s age, income, race or ethnic background, they looked at how patterns of preterm birth within each zip code changed when the number and intensity of smoke days rose above normal for that location.

They found every additional day of smoke exposure during pregnancy raised the risk of preterm birth, regardless of race, ethnicity or income. And a full week of exposure translated to a 3.4 percent greater risk relative to a mother exposed to no wildfire smoke. Exposure to intense smoke during the second trimester—between 14 and 26 weeks of pregnancy—had the strongest impact, especially when smoke contributed more than 5 additional micrograms per cubic meter to daily PM 2.5 concentrations. “If one can avoid smoke exposure by staying indoors or wearing an appropriate mask while outdoors, that would be good health practice for all,” Shaw said.

The findings build on an established link between particle pollution and adverse birth outcomes, including preterm birth, low birth weight and infant deaths. But the study is among the first to isolate the effect of wildfire smoke on early births and to tease out the importance of exposure timing.