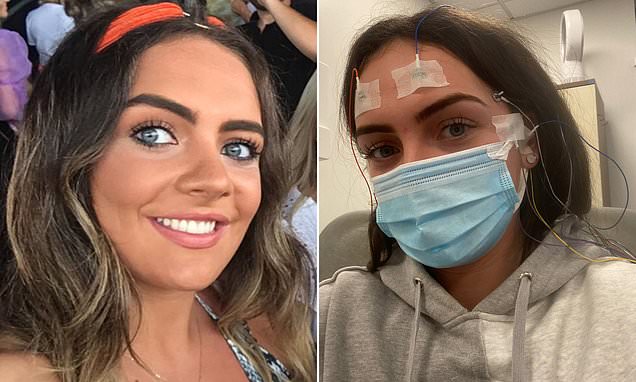 NHS worker, 22, accused of being ‘drunk’ at work discovers she actually has EPILEPSY

A 22-year-old NHS worker learned she had undiagnosed epilepsy when a colleague urged her to see a doctor after acting ‘drunk’ at work.

Annie Newcomen, from Liverpool, suffered from ‘episodes’ that would cause sudden brain fog and memory loss multiple times a day in the lead up to her diagnosis in March.

The speech therapist wrote off her symptoms for weeks but was taken to A&E by a coworker who thought she was ‘covering up that she was drunk’.

After initially diagnosing her with stress, medics eventually discovered Ms Newcomen had been experiencing mini seizures and that she had epilepsy.

She is now taking medication which has slashed the frequency of her fits from three times per day to just a few each week.

However, she can no longer drive, take a bath or swim without a lifeguard present and cannot go back to work until her seizures are fully under control. 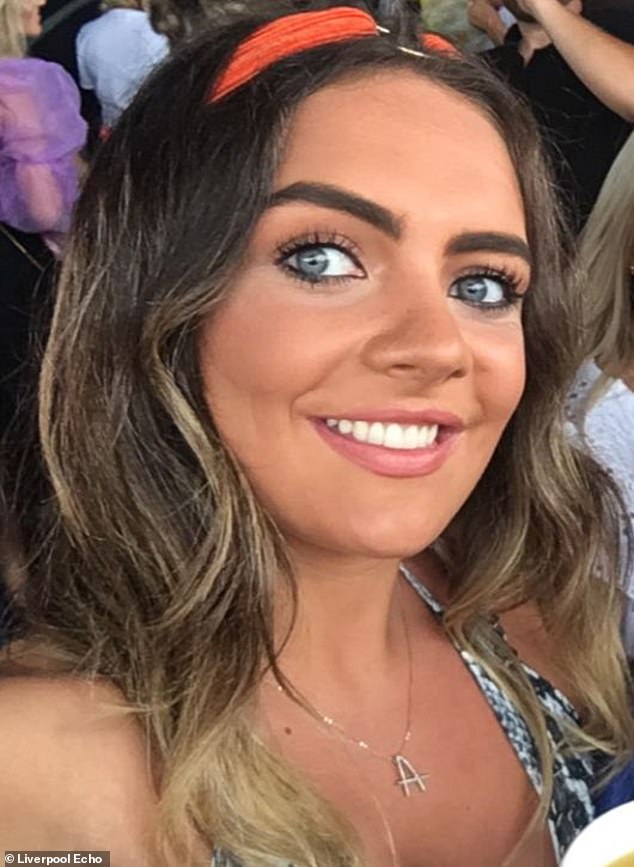 Annie Newcomen, from Aigburth in Liverpool, was rushed to A&E after a colleague said was acting as though she was ‘covering up’ that she was drunk. The speech therapist had been ‘feeling strange’ and suffering from déjà vu and a foggy brain multiple times a day — all tell-tale signs of the seizure-causing condition

Ms Newcomen told the Liverpool ECHO: ‘In work I kept on feeling strange, I had a lot of déjà vu experiences.

‘I would feel as though I had forgotten everything, I would be on the ward and go to the office – but forget why I was there, or what I was doing.’

After weeks of suffering from these symptoms, Ms Newcomen was then taken to the emergency department by a colleague.

‘I was taken to A&E that day as one of my colleagues knew something was up, they said it seemed as though I was covering up I was drunk, that’s how I was presenting myself,’ she said.

Epilepsy is a condition that affects the brain and leaves patients at risk of seizures.

Anyone can have a seizure, which does not automatically mean they have epilepsy.

Usually more than one episode is required before a diagnosis.

Seizures occur when there is a sudden burst of electrical activity in the brain, which causes a disruption to the way it works.

Some seizures cause people to remain alert and aware of their surroundings, while others make people lose consciousness.

Some also make patients experience unusual sensations, feelings or movement, or go stiff and fall to the floor where they jerk.

Epilepsy can be brought on at any age by a stroke, brain infection, head injury or problems at birth that lead to lack of oxygen.

But in more than half of cases, a cause is never found.

Anti-epileptic drugs do not cure the condition but help to stop or reduce seizures.

If these do not work, brain surgery can be effective.

Medics told Ms Newcomen her symptoms were stress-related but she knew they had missed something.

She said: ‘I didn’t feel stressed, I mean, the work I do can sometimes be stressful but I wasn’t stressed, everyone’s job is a bit stressful.’

Ms Newcomen contacted her GP the following day, who referred her to The Walton Centre, a neurology hospital in Fazakerley, Liverpool, to see a specialist at the end of March.

While waiting for her appointment, she underwent blood tests and an electrocardiogram (ECG) — a test which checks the heart’s rhythm and electrical activity.

Her results were normal but Ms Newcomen was still suffering from on-and-off symptoms. ‘Some days I would be completely fine, then others I wouldn’t,’ she said.

On one day when she was ‘feeling really bad’ she called the specialist hospital and had her appointment brought forward to the following day.

Ms Newcomen told the neurologists that she was suffering from ‘episodes’ where ‘she couldn’t speak’ and would get a ‘foggy brain’.

‘He turned around and said to me that I have epilepsy,’ she said.

Epilepsy is a condition that affects the brain and leaves patients at risk of seizures.

Seizures occur when there is a sudden burst of electrical activity in the brain, which causes a disruption to the way it works.

The doctor also revealed Ms Newcomen was suffering from focal seizures, also known as partial seizures, which can cause a general strange feeling that’s hard to describe, a feeling that events have happened before and stiffness or twitching in part of the body.

Some patients also experience unusual smells or tastes, tingling in their arms and legs and intense feelings of joy or fear. The seizures usually pass within seconds or minutes.

Ms Newcomen’s are triggered by stress, tiredness and skipping meals.

She said: ‘I was shocked, I thought epilepsy was something you could only get when you were a kid and grow up with it, I didn’t think it could come on in adult life. He told me you can get it at any age.’

An epilepsy diagnosis is mainly based on a person’s symptoms and ECG and MRI brain scans may be conducted, but these often fail to detect epilepsy.

Around one in every 100 people suffer from the condition, with mostly older people affected. And 1,000 people in the UK die from causes related to epilepsy every year.

The speech therapist is still waiting on the results from an ECG scan, which is due at the end of this month, but has been told that even if the test ‘comes back fine’ she will still have epilepsy.

She is no longer allowed to drive, have a bath or swim without a lifeguard.

She said: ‘A lot of my independence has just been stripped away from me. I was having about two or three seizures a day then, for about three weeks.’ 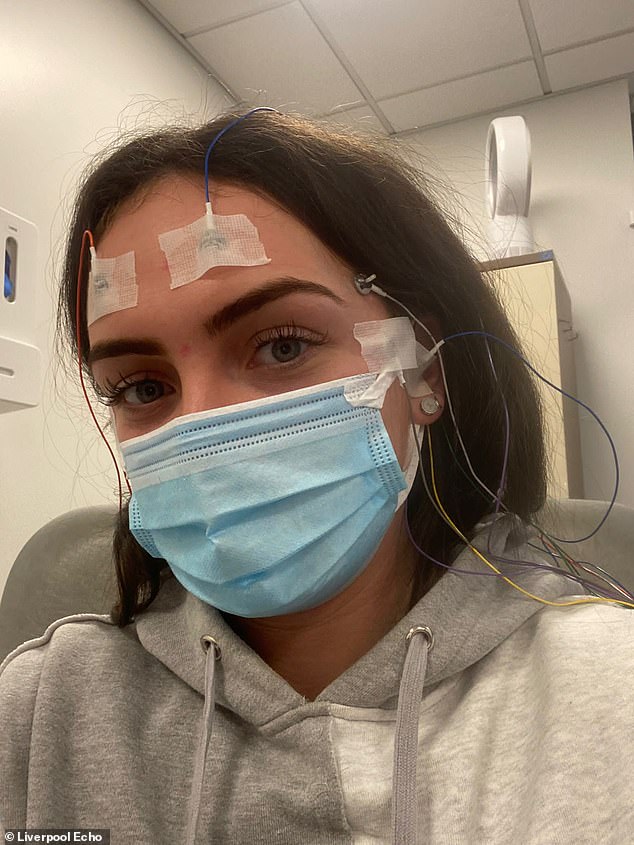 After medics initially dismissed her symptoms as stress-related, Ms Newcomen was diagnosed with epilepsy, with her symptoms actually being signs of focal seizures. Ms Newcomen is now taking medication which has slashed her seizures from two or three times per day to just a few per week

During the seizures, Ms Newcomen said: ‘My body twitches, it is not a fall to the floor type of seizure. My eyes flicker, I completely zone out – it is as if I leave the room – I am still conscious, but my mind is not there.’

She said it takes six or seven minutes before she can speak.

Ms Newcomen said: ‘I am a speech therapist, the last five years of my life have been focusing on speech and communication, and then for me not to be able to communicate, It is how I knew something was definitely not right,’ she said.

‘It has been a massive life change for me. I have had to come to terms with the fact that this is happening to me, rather than me treating patients – like I treat patients who have had operations for epilepsy – and now I’m the patient.

‘In terms of my job, I need to wait for the time being until my seizures are under control, but work are being so supportive of me and really understanding about what is going on.’

She added: ‘My whole outlook on life has completely changed. I know it is cliché but life is too short, I was petrified at first thinking that it could have been a brain tumour or anything, weird as it is to say, I am lucky it is only epilepsy, if that makes sense.

‘I look at it now like, you can’t take anything for granted and you have to enjoy everything that you have in life. When they’re taken away from you, things like going to work or driving a car, that’s when you realise how lucky you actually were.’