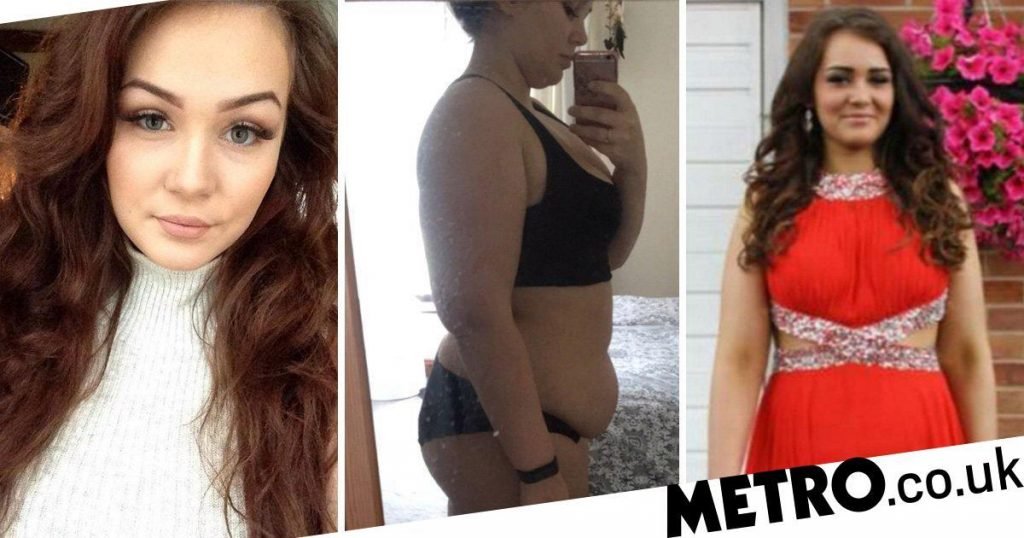 ‘I was going to my doctors so they would tell me what was wrong and for them to try and make me out to be this horrible, lazy overweight person when I was doing everything I could possibly do to diet and lose weight.

Clodagh spent 18 months trying to convince doctors that her weight wasn’t the result of her diet, before finally being diagnosed with lipoedema, a rare condition that causes a buildup of fat in the legs, bum, and arms.

Lipoedema is a chronic condition that causes buildup of fat in the legs, thighs, arms, and buttocks.

The feet and hands aren’t affected, which creates a ‘bracelet’ effect just above the ankles and wrists.

It can also cause pain and soreness, with easy bruising. The condition can worsen over time and lead to issues with mobility.

‘The way I have to describe it to people is like I am trapped inside someone else,’ says Clodagh.

‘That’s the only way I can describe the way it feels. I just don’t feel like the same person at all.

‘I show people pictures of what I used to look like then and they can’t believe the difference.

‘Looking at me now it’s hard to believe I was ever that small but I was smaller. I would always be tall but I was also quite slim. For it to be this extreme now is just so weird.

‘I always used to go to the gym every night after work five days a week. I would do cardio, swimming, all the usual. I really enjoyed doing it – I still do, but I can’t go now.

‘I’d love to go. But now I’d be there for five minutes and not be able to do anymore [due to the pain].

‘I’ve literally done every single diet you could possibly think of – all the shakes, everything. I was doing weights at the gym to try and change things up a bit.

‘It was really frustrating when I wasn’t getting results because I was doing everything right.

‘It’s painful, every single day. Every single day is just awful. Even just walking up the stairs or downstairs I could cry it’s that painful.

‘I’ve got painkillers prescribed to me by the GP just to take the edge off a little bit but I’m also having to have sleeping tablets at night now because I just can’t focus.

‘The pain and uncomfortableness all the time makes it so hard to switch off and think about anything else.

‘I can’t remember the last time I hung out with my friends because I just don’t want to go out. It’s changed everything for me.’

After being refused surgery to remove the excess fat on the NHS, Clodagh’s family is now fundraising for the £70,000 needed for the six operations she requires to remove fat from her arms, buttocks, and legs, and the fat overhang on her ankles and wrists.

‘Without raising the money or being able to get it another way it just feels like it’s going to put me in deep debt for the rest of my life,’ says Clodagh.

‘I’m worried about it. It’s deemed as a cosmetic procedure because it’s a form of liposuction that we need to have. The NHS don’t see a reason to fund it [for me].

‘I went to see the surgeon for my consultation and she said it’s one of the worst she’s seen at my age because it’s progressing quite rapidly.

‘If I don’t have the surgery, I won’t be able to walk before my 30th birthday because my legs will get that big. I’ll be in a wheelchair. That’s really hard to deal with.

‘A lot of people think it’s just an excuse I’m trying to use for being overweight.

‘It’s like if someone has hit you and you have that throbbing on your skin, it’s like that constantly all over. It’s like my whole body is a big bruise. It’s that sort of pain – I’m really tender.

‘Even if I bump into something or rub my leg it’s painful because it’s that sensitive.

‘Having these surgeries means everything to me. People ask me if I’m nervous or worried about it, and I’m just not. I just need it to happen.

‘I’m struggling to cope with it at the moment, so for it to be as soon as it can, that’s the only thing I’ve got keeping me going.’

MORE: I spent years battling the government for disability benefits I’m entitled to

MORE: Fitness influencer who has broken her bones 200 times won’t let his disability hold him back