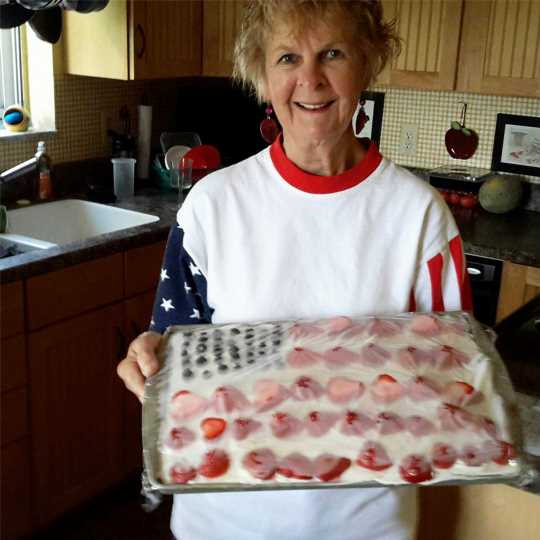 A Florida woman has died from a flesh-eating bacteria after walking on the beach near her home.

Lynn Fleming, 77, was walking along Coquina Beach on Anna Maria Island, a popular destination on the Gulf of Mexico, when she fell in the water and got a small cut on her left shin just two weeks ago.

“There was a little depression that she couldn’t see because it was under the water,” her son Wade told WTVT. “She fell into it, came out with a little ¾-inch cut; a bump on her leg. It was just a small cut, didn’t think much of it. We got the swelling down, but it just kept bleeding.”

Fleming went to the doctor a few days later and got a tetanus shot and a prescription for an antibiotic, but the next day, friends found her unconscious at home. She was rushed to the emergency room and doctors diagnosed her with necrotizing fasciitis, a very rare but deadly flesh-eating bacterial infection that destroys the body’s soft tissue.

The fast-acting infection quickly spread through Fleming’s body, and she died on Friday, just two weeks after her fall.

“It seems like a Lifetime movie, really,” Wade said. “I can’t even believe it, that it’s really even happening. It’s just all happening so fast.”

Fleming’s death comes in the same month that a 12-year-old girl, also in Florida, was infected with a flesh-eating bacteria. Kylei Parker, who survived after getting emergency surgery, had also swam in the Gulf of Mexico, but she was 400 miles north in Destin, Florida. The bacteria thrives in water that stays above 55 degrees year-round.

RELATED: What to Know About Necrotizing Fasciitis — the Flesh-Eating Bacteria Showing Up at Beaches

While necrotizing fasciitis is rare, with just 20,000 cases in the United States each year, precautions can be taken to reduce risk. Since the bacteria enters the bloodstream through an open cut or wound, stay out of the water after getting a new injury. And get to a doctor immediately if a cut has swelling or redness, since the infection can spread quickly.

Wade said he’s sharing his mom’s story as a warning to others who may be vulnerable.

“They can be treated,” he told WTVT. “You get the open wound while playing at the beach, watch it, take care of it.”

Wade’s wife Traci said that Fleming’s death is particularly heartbreaking knowing how much she enjoyed her life in Florida.

“This is the place she loved,” Traci said. “She couldn’t wait to get down here and retire. She loved the ocean; she loved walking on the beach. Unfortunately, it’s a place that took her life by freak accident.”